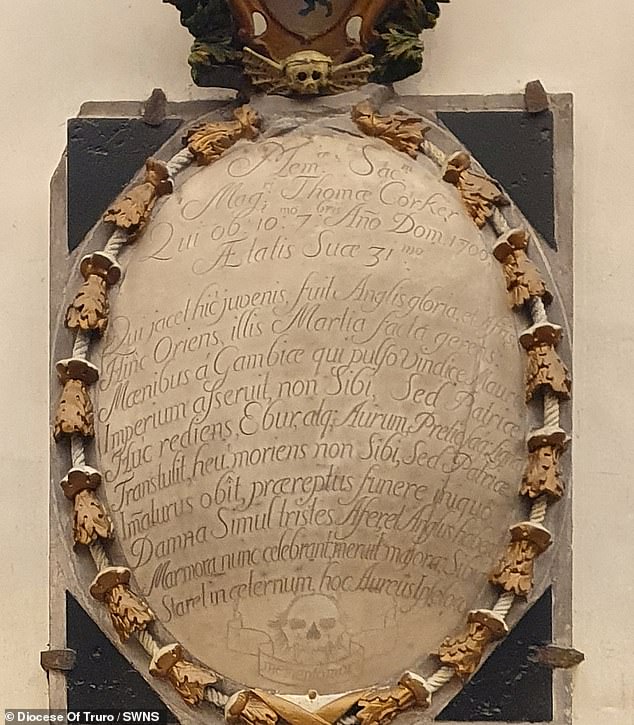 A Cornish church’s baroque monument to a slave trader is being called out for removal by activists.

Since the early 1700s, the marble memorial to Thomas Corker (1670–1700) has been fixed to the wall of King Charles the Martyr church in Falmouth, Cornwall.

The second child of a family of merchants, Corker enlisted in the Royal African Company at the age of 14 as an apprentice on the Guinean coast. As he progressed in the organization, he eventually became an agent at York Island, now known as Sherbro Island, in Sierra Leone.

He wed Seniora Doll, a daughter of an African chieftain who ruled over the Ya Kumba family in the Yawri Bay region. The couple had two boys, and both of their offspring are still in Sierra Leone.

Corker, who was just 30 years old when he passed away in Falmouth on a business trip in 1700, had a memorial built in his honor by his older brother Robert, who also contributed money to church renovations in 1708.

Along with a Sunday-created online petition, a campaign demanding for the monument’s destruction has now been established on Facebook.

If the Corker family and the Reverend had been proud of how Thomas Corker acquired his riches as a slave trader, it would have been included in the eulogy, according to the petition’s organizer Kate Thomas. It was left out. He was praised instead.

The monument for Corker, who was born into a well-known Falmouth family and was baptized there, is now up for discussion inside the church itself.

The omission [of Corker’s career] has led to a collective amnesia about Falmouth’s participation in the Transatlantic Slave Trade down the generations of Falmouth residents, while Thomas Corker’s memorial and the man himself have been admired by visitors to the church for over 300 years, said Ms. Thomas.

“We condemn the slave trade, which was horrible,” declared Bishop Hugh Nelson. The fact that Corker was a slaver, and there is a monument to him in a church that guides us to the God of freedom and justice, really disturbs us.

We wish to continue this discussion with the larger community since the church is a public structure, and we welcome the chance to learn about everyone’s thoughts and viewpoints.

There could be better and more inventive ways to honor those who perished in the horrors of slavery in the past and to inspire more people to work toward a fair and decent society now. However, it may be that taking down the monument is the greatest solution.

We want to investigate both of those possibilities before making a firm choice.

The Church of England started to engage churches in 2020 with the intention of encouraging them to assess monuments as part of a Contested Heritage procedure.

Late this year, King Charles the Martyr Church started their own procedure to determine what should be done about the memorial’s future.

Conversations with local council members, members of the black community, local historians, and a mixed-race direct descendant of Thomas Corker have taken place in the months that have followed.

Following that first discussion, it was decided to include a temporary sign that reads: “There is contentious heritage around this monument.”

The church is collaborating with interested parties and members of the black community to go ahead and look into the possibility of using this as a teaching tool to right the wrongs of the past.

Although the meetings so far have been productive, the previous 12 months have seen only sluggish development.

However, everyone concerned, including the church community, has made it plain that they want to find a way to utilize this as a chance to spread knowledge and awareness about problems of race, slavery, and prejudice both in the past and now.

The monument is next to one for Joseph Emidy, a well-known black musician and former slave who stayed in Falmouth after getting married and being free.

The church said that the closeness of two monuments, which tell very different tales of the transatlantic slave trade, would provide a chance to spread awareness of both Falmouth’s role in the slave trade and the modern reaction to it.

Dr. Canon The Corker Memorial is in a prominent location in the church, and the message it now sends about the heinous transatlantic slave trade conflicts sharply and deeply with the message of the Christian Gospel, according to Bill Stuart-White, rector of King Charles the Martyr Church.

“None of the current generation of worshipers would want to be linked with the memorial’s thoughts or to commemorate the deeds of the man it honors in any manner.”

The Church is devoted to finding the finest and wisest solution to right the complicated wrongs of the past and says that this is a matter that it takes very seriously.

Visit this link to see the campaign petition. Email Revd Stuart-White at wstuartwhite@gmail.com if you’d like to express your thoughts about the monument.