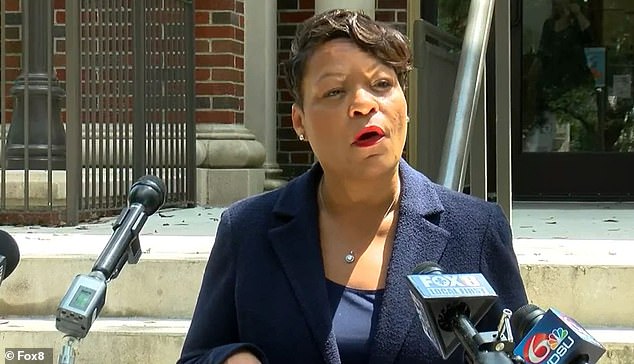 Controversial LaToya Cantrell, the mayor of New Orleans, acknowledged residing in a rent-free apartment in the city’s French Quarter.

Cantrell, who earlier sparked controversy when she used municipal money to fly first class and justified it by arguing economy class was “unsafe” for black women, now insists she did nothing wrong.

The market rent for Apartment 530B, which has a Jackson Square address in the city’s Upper Pontalba building, is $2,991 per month.

However, the city’s Metropolitan Crime Commission requested a probe into Cantrell’s usage of the residence in a report it delivered to the city council on Thursday.

The MCC provided witness evidence claiming the mayor has been spending nights there, erecting privacy screens, and receiving parcels, as well as photos of her entering and exiting the flat.

Helena Moreno, president of the city council, is requesting more time to consider the conclusions before approving a probe.

The French Market Corp. board member Eugene Green’s representative said, “Councilmember Green is not aware of any rules or procedures that may have been broken.”

According to the complaint, Cantrell told Byron Cornelison of the Mayor’s Office of Cultural Economy when would be a good time to address a leak in the restroom.

She had previously written to him about calling Cox Cable representatives to repair the apartment’s WiFi.

The mayor has been enjoying extra tax-free benefits, which according to MCC President Rafael Goyeneche, makes this agreement unlawful. She shouldn’t be utilizing it or live there. And I believe that she is abusing and misusing her power. However, I’m awaiting the stance of the municipal council.

Goyeneche wants the council to look into the matter.

Gregory Joseph, the director of communications for Cantrell, reacted, saying, “The mayor’s use of the city-owned condominium at the Pontalba is consistent with the use of prior mayors. There are no restrictions on how that property should be used under the 2013 franchise agreement, and the FMC thinks the mayor is not required to pay rent since she is utilizing the flat in the same way as prior mayors have.

The mayor has been making headlines quite a bit lately after claiming that flights in economy class are risky for black women while adamantly stating that she would not reimburse the public for the $30,000 she spent on first-class flights to France and Switzerland.

LaToya Cantrell stated: “My travel accommodations are a question of safety, not of luxury,” at a news conference on Thursday.

As as women are aware, we are often forced to fend for ourselves while having our health and safety ignored.

“As the mother of a small kid for whom I live, I will defend myself by whatever means necessary to guarantee that I am there to see her development into the strong lady I am training her to be.

Anyone who questions how I defend myself just doesn’t comprehend the environment in which black women live.

Despite the city’s restriction on luxurious air travel, she has consistently refused to pay back the cost of a premium American Airlines ticket she took for herself from Washington Dulles Airport to Switzerland in July.

Cantrell squandered a similar amount on a first-class flight back to France earlier this year while her assistants took coach. She also spent almost $10,000 on her own flat bed seat.

Cantrell has justified her decision to buy the expensive tickets by saying that she was “doing business” for the city and that she didn’t feel it would be safe for her to fly in economy.

The mayor was sitting in first class, while the rest of her staff, including her security detail, was in coach.

According to the Chief Administrative Officer, the legal department is currently determining whether Cantrell is required to repay the government for the almost $30,000 it spent on first-class flights to France and Switzerland.

When asked by reporters on Thursday whether she was contemplating spending money to restock municipal coffers, the mayor responded in a rather prickly manner.

“One thing is certain: I do my job, and I will keep doing it with honor and honesty at all times. So that’s all for what I have to say about it!

The mayor maintains that the excursions and extravagant travel costs were required for the improvement of New Orleans itself.

However, there is minimal leeway given the city’s travel regulations: “Employees are obligated to buy the lowest flight available…

The expense of an upgrade from coach, economy, or business class flights is entirely the responsibility of the employee.

In accordance with the policy, any reconciliation of travel expenditures that results in an overpayment by the City mandates that the employee refund the City within twenty business days.