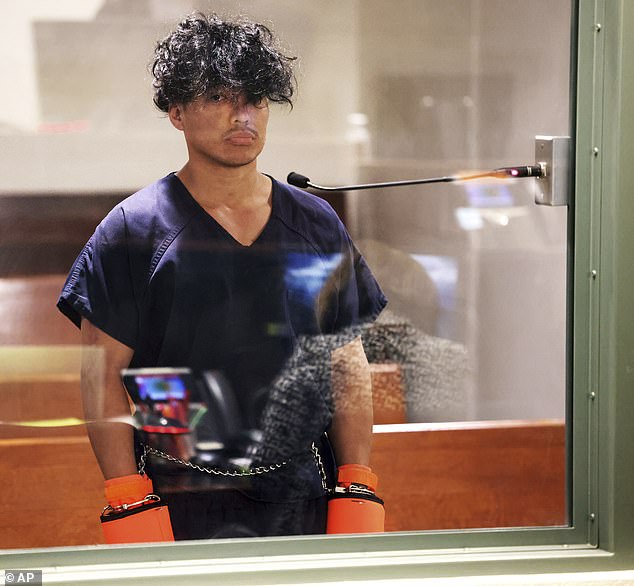 One of the showgirl victims of the Las Vegas Strip stabbing said that the suspect Yoni Barros asked the victim to pose for a photo with him wielding a knife before he launched the savage attack.

Victoria Cayetano, 19, was on her ninth day of work as a showgirl when Barrios attacked her, Maris Digiovanni, 30, Anna Westby, 25, and another woman named Selina.

Speaking to DailyMail.com, she told how the group thought Barrios’ request was strange and said the Guatemalan alleged illegal immigrant, 32, spoke only to ask for a photo and to tell the quartet he worked as a chef.

Barrios began his rampage moments after taking his knife out of his bag and targeting Maris – who died of her wounds – first.

Cayetano said: ‘When he [Barrios] approached us, he asked us for a picture. He came from Maris’ side and when he put his bag on the sidewalk – he put it down because he wanted to take a picture.

‘He said two things that he wanted to take a picture and he was a chef. I asked him where he was traveling from and he didn’t say anything.

‘He just looked at us and I honestly thought he probably didn’t know how to speak English, not in full sentences. We don’t judge people and if someone wants to take a picture with us, that was it.

‘When he took the knife out, he specifically said he wanted to take a picture with his knife and we all looked at each other, thinking weird.

‘I specifically remember Maris looking to Anna and Selina and smiling like, that’s odd, but we never really say no to people because it’s our job to take pictures.

‘Then when he took out the knife, he unfolded it once, I looked at it and he just grabbed the knife and jerked it towards Maris.’

Cayetano told how she ran for her life – fleeing in the opposite direction from the other girls and heading towards the luxury Wynn Hotel.

She realized she had been stabbed when she felt a blow to her back that was hard enough to knock her forwards onto her knees.

The 19-year-old told DailyMail.com: ‘I just panicked when he moved with the knife because it didn’t look safe. When he started moving with the knife, I ran.

‘It happened so fast that when he charged at Maris I didn’t see it happen but I knew he was coming at me.

‘I started running but I had heels on so I couldn’t run as fast. I think when he got me, I felt the force and I fell and I had a scrape on my shoulder, a bruise on my right knee and a scrape on my left knee from the fall.

‘If I hadn’t fallen, the knife would have gone much deeper on my back. When I fell, I didn’t feel that he stabbed me, I just felt a force hit me.

‘When I fell, I saw the girls running the other way. I just saw red and thought run – I couldn’t tell who was where. I just ran so fast and I was yelling, ‘he has a knife!’

Cayetano said she finally felt safe when she got inside the Wynn and found a security guard – falling to her knees in gratitude.

Rushed to hospital after calling her boyfriend and brother, she told how she stayed in the ER until 10.30pm that night while she was given scans and had her wound stitched up.

She told how she could hear her colleague Anna screaming in pain in the bed next to hers as medics battled to treat a knife wound to the back that had pierced her lung.

Cayetano said: ‘When I was getting my stitches, Anna was next to me and that’s when I knew her wounds were much worse than mine – it got to her lungs, the stab wound – and I could hear her screaming in pain.

‘That was just heartbreaking because we were fine just a few minutes ago.’

She said she was told the news of Maris’ death by her boss Cheryl Lowthorp, 52, who told the girls what had happened via a group chat.

‘I was on my phone and I saw Cheryl texted on the group text that Maris passed away’ Cayetano told DailyMail.com.

‘I couldn’t wrap my head around it because we were taking a photo just 30 minutes before. I couldn’t believe it because I didn’t see it happen.

‘I still don’t know what really to feel or to think at the moment.’

She says she is now trying to recover from the attack that left her friend dead and says she feels grateful to be alive.

‘I don’t really know what to feel because it seemed like a movie or a dream,’ the teenager said. ‘I have the bandages and stitches on my back but I really don’t know how to feel.

‘Everybody keeps asking me how I feel and I don’t know what to say. Physically, I feel frustrated I can’t move or do the thing I want to do but I feel grateful that I’m here.’

Eight people were hurt when Barrios launched his rampage last Thursday, four of which were Las Vegas showgirls.

The stabbing spree left two people dead, three in critical condition, and the other three in stable condition.

Clark County Sheriff Joe Lombardo confirmed that some of the victims were tourists visiting the city.

Horrific videos and pictures shows what appears to be one of the showgirls in a pool of blood outside the resort.

LaRochelle told the media: ‘As you can imagine we have scores of witnesses to continue to get statements from and we have a number of video surveillance we have to get through in the immediate future.’

Describing a short video showed at the press conference, LaRochelle said that the suspect stabbed the showgirls and then headed south and stabbed an additional victim.

He was pursued by witnesses prior to his arrest.

Cops swooped on the Venetian resort and the crazed knifeman was arrested with blood coated all over his sleeves.

Medics were seen desperately working on her in front of horrified onlookers while other images showed a woman being whisked away on a stretcher.

At least one of the victims was transported to University Medical Center, where loved ones were seen going in in tears.

Multiple casinos in the area reportedly shut down their entrances in the wake of the attack. Officials were quick to alert the public about the incident but assured them there was no ongoing threat.

Hotels in the area remained open but many tourists struggled to navigate the vicinity surrounding the strip due to the various closures.