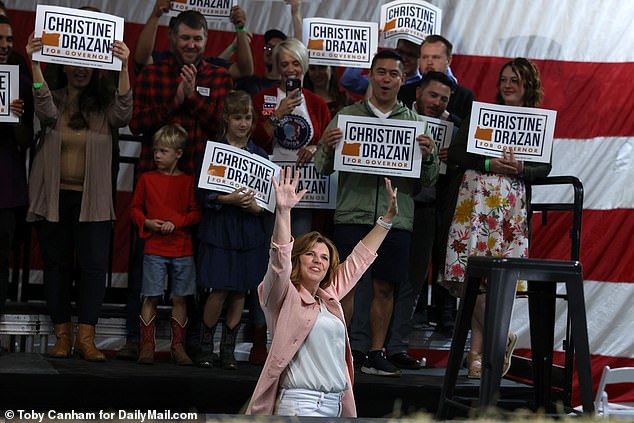 In a bid to win over a state that hasn’t elected a Republican governor since 1982, Virginia Governor Glenn Youngkin campaigned in Oregon on Tuesday night.

In Aurora, Oregon, he gave Christine Drazan, who has a slim lead in the polls, one of his signature red vests, throwing the enthusiastic audience into a frenzy.

In a state that had previously been seen as being deep blue, he said she was poised to replicate his unexpected success, which he claimed would inspire the whole Republican movement.

After the event, he told reporters, “It’d be it’d be a shot heard round the world,” portraying it as a statement that people were sick of progressive leadership.

It comes soon after President Joe Biden paid the state a visit, indicating that both parties are aware that Oregon is up for grabs.

More than 2000 people attended the event in a barn in rural Oregon, approximately 40 minutes outside of Portland, according to the gathering’s organizers, who claimed Youngkin’s attendance had attracted them.

Drazan ran on a platform of change and berated her Democratic opponent for doing little to halt the state’s legalizing of narcotics and the reduction of police spending.

Instead, she pledged to utilize a combination of law and compassion to rid communities like Portland, which are now seeing record levels of lawlessness.

“And when we do that, we’re going to help those who are suffering, restore community safety, rebuild downtowns, get our parks back, and restore Oregon’s beauty.”

They conducted their gathering the day before the start of the 20-day postal voting period, which experts believe tends to favor Democrats.

The COVID-19 school closures, rising inflation, the epidemic of hard drugs, homelessness, and violence that has overrun Oregon’s cities were just a few of the major concerns Drazan spoke on with Oregon voters.

Drazan will need to gain the support of independents and Democrats who are fed up with the state’s leftward movement if she wants to win the election and become the first Republican to hold the office of governor since 1982.

She has refrained from endorsing former President Donald Trump and his allegations of election fraud, much like Youngkin, which would have been political death in a liberal state like Oregon.

Hardline Trump supporters like Kari Lake in Arizona have an other route available to them.

Democrats are so concerned, in fact, that Biden went into Portland on Friday to help Tina Kotek’s campaign.

He gave a speech outlining his administration’s economic achievements, according to him.

Drazan and Youngkin laughed at it as they spoke to reporters after their rally.

“What we see throughout the nation is that the progressive liberal Democrats are absolutely out of touch with what’s going on around kitchen tables in America, and to assume that our economy is in excellent health simply underscores again how out of touch they are,” Youngkin added.

Something has to change, she tweeted, “when even coffee shops can’t remain open in Portland due to public safety concerns.”

Politicians have prioritized their personal power before maintaining the safety of our communities.

Drazan had a successful month, moving up the polls to the point that analysts said it was too close to call.

She has a three-point advantage against Tina Kotek, the Democratic contender, according to the average of surveys run by the political website FiveThirtyEight.

Portland set a record for murders in 2017 with 90, breaking the previous high of 66.

The 2020 referendum in which voters decided to decriminalize small quantities of hard drugs is one of the most controversial subjects.

According to Drazan’s campaign, Kotek would continue the woke policies of departing Governor Kate Brown’s government.

The former Democratic state lawmaker Betsy Johnson, who is also running as an independent, is credited with siphoning off some of Kotek’s support.

Greg Leo, a former executive director of the state Republican Party, however, said that Kotek had a successful week as a result of Biden’s visit and the newspaper The Oregonian’s support.

At this point, it’s sort of Tina’s race to lose, he remarked. You are aware that Christine’s problem is that she has had her surge. How does she keep up her surge?

He said that Youngkin provided a blueprint for Drazan’s campaign.

He said, “He’s a Republican who won in the blue state.”

And so, you know, he sort of introduces this novel notion that Republicans may win in places with a history of supporting Democrats.

He is one of the Republicans Christine Drazan may bring in to really show some excitement around since he is not a Trump supporter.

Drazan has taken cautious not to support the outgoing president or his assertions that the 2020 election was rigged.

However, strategists feel it is the only way to win over independents and former Democrats in a liberal, coastal state like Oregon. This has reduced the pool of famous people she may invite for appearances.

»Youngkin feels Drazan can duplicate his blue-state success in Oregon«