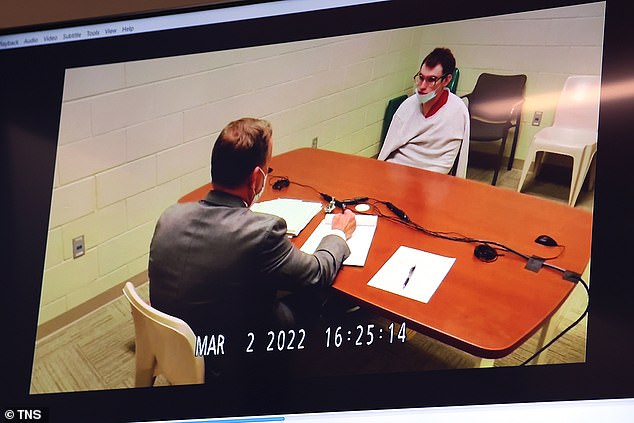 Video played at Florida school shooter Nikolas Cruz’s sentencing trial on Monday revealed that Cruz told a prosecution psychiatrist he first thought about committing a mass killing in middle school and that he read extensively about other assassins to learn from their methods and mistakes in order to shape his own plans.

Five years prior to the February 14, 2018, massacre of 17 people at Parkland’s Marjory Stoneman Douglas High School, Cruz told Dr. Charles Scott during an interview in a jailhouse in March that reading about the 1999 massacre of 13 people at Colorado’s Columbine High School gave him the idea for his own mass killing.

Cruz explained to Scott how Columbine, the 2007 shootings at Virginia Tech University that left 32 people dead, and the 2012 shootings at a Colorado movie theater all influenced his planning.

Scott was informed by Cruz that “I researched mass killers and how they accomplished it.” How they prepared, what they obtained, and what they used.

He learnt to maintain some distance from people while he shot, look for anyone coming around corners to stop him, and strike “as quickly as possible” since “the cops didn’t do anything” in the prior incidents.

Cruz predicted that he would have roughly 20 minutes to kill victims.

Cruz, 24, pled guilty to the killings that took place on February 14, 2018, within a seven-minute period. The outcome of his trial will only determine whether he receives the death penalty or life in prison without the chance of release.

Cruz must get the death penalty with a unanimous decision from the jury of five women and seven men. Anything less would result in a life sentence.

Scott’s evidence is expected to refute the defense’s assertion that Cruz’s biological mother’s excessive drinking throughout her pregnancy led to fetal alcohol spectrum disorder, which set him on a lifetime course of strange and sometimes violent conduct that culminated in the killings.

The defense also argued that Lynda Cruz, Cruz’s adoptive mother, was too distraught to fully treat Cruz for his mental health difficulties after her husband passed away when Cruz was five years old. A little over three months before the shootings, she passed away.

A forensic psychiatrist from the University of California, Davis named Scott testified on Monday that Cruz’s exams and his academic and medical records contradict the conclusions of the defense.

Cruz, a former student at Stoneman Douglas who is now 24 years old, was given the diagnosis of antisocial personality disorder, according to him. However, he chose not to change his conduct since he had no concern for other people. Scott used Cruz’s 14-month stint as a cashier at a budget supermarket as an example. During that time, there were no issues.

Cruz earned a perfect grade in a course on violence and firearms, according to him, and fared well in alternative education courses he took after being expelled from Stoneman Douglas a year before to the massacres.

He said that once his fiancée dumped him 18 months before the deaths, Cruz’s conduct deteriorated rapidly.

Cruz claimed to Scott that he had adjusted the sights on his semiautomatic AR-15 weapon the night before the massacre to ensure precise firing.

He tried to picture the sensation of the recoil and the reactions of his victims. In order to blend in with the other students as he escaped, he put on the burgundy polo shirt he earned as a Stoneman Douglas Junior Reserve Officer Training Corps member.

Satz also played back recordings Cruz had posted in the days leading up to the shooting, in which he discussed his plans for carrying them out and expressed the desire for at least 20 fatalities.

Cruz allegedly informed Scott that he planned his slaughter on Valentine’s Day because “he has no one to love and adore him,” according to Scott.

This was not a choice that was made on the fly. Months of planning went into this,’ Scott added.

He posted on YouTube on September 24, 2017, five months before the shooting, saying, “I’m going to be a professional school shooter.”

“My life stinks; I dropped out of high school.” He subsequently wrote, “I’m going to embark on a murdering spree.”

Cruz posted recordings in which he explained his intentions for the massacre to viewers days before the mass shooting.

In one video, he states, “With the strength of my AR, you will know who I am.” “I want to kill 20 people, and Stoneman Douglas in Parkland, Florida is where I’m at.” It will be a significant event, he claims.

Cruz jokes, “You’ll all recognize me when you see me on the news.

He declares, “You’re all going to perish.”

Cruz was “calm, organized, speaking carefully” in the recordings that were shot days before the shooting, according to Dr. Scott’s testimony.

According to the expert, Cruz’s own remarks, recordings from before the assault, and social media postings all demonstrate the extent of preparation that went into the mass murder.

This was not a choice that was made on the fly. According to Dr. Scott, this had been planned out for months.

Cruz claimed to Scott that he ran away and stopped firing because “I didn’t have anybody else to kill.”

The defense’s attempt to cross-examine Scott about how Stoneman Douglas security guards saw Cruz walking onto campus carrying a large case just before the shooting, were aware he was dangerous, but did not stop him or alert teachers to lock their classrooms was rejected by Circuit Judge Elizabeth Scherer.

Scherer also denied inquiries into why Cruz was flagged as a possible school shooter to the FBI and Broward County sheriff’s officers but nothing was done.

“All of them should have put a stop to it.” It wasn’t that advanced (of a crime). They claim that this was a clever crime,’ Curtis added. “It was only taken off due to a slew of regrettable omissions,” it said.

Such inquiries, according to Judge Scherer, would be in violation of Florida law that forbids attributing criminal behavior to other people. In order to resolve lawsuits accusing them of carelessness, the FBI and the Broward County school system did paid a total of $150 million to the families of the deceased and injured plaintiffs.

Scott was forced to admit during Curtis’ cross-examination that Cruz often had failing or low marks throughout his academic career, frequently performed badly on standardized exams, and frequently searched the internet for suicide techniques.

He agreed that Cruz had received two recommendations for mental commitment, but nothing ever came of them.

The trial, which got under way on July 18, has moved slowly; Monday was the second court appearance in in three weeks. The trial only had one day of proceedings last week due to Hurricane Ian.

That followed a break of almost two weeks when the defense unexpectedly rested its case on September 14 after calling just roughly 25 of the 80 witnesses they had promised to call.

The prosecution then need time to organize witnesses and build its counter case.

This week’s deadline for the lawsuit is anticipated. Deliberations would then follow, and closing arguments would be made the following Monday.