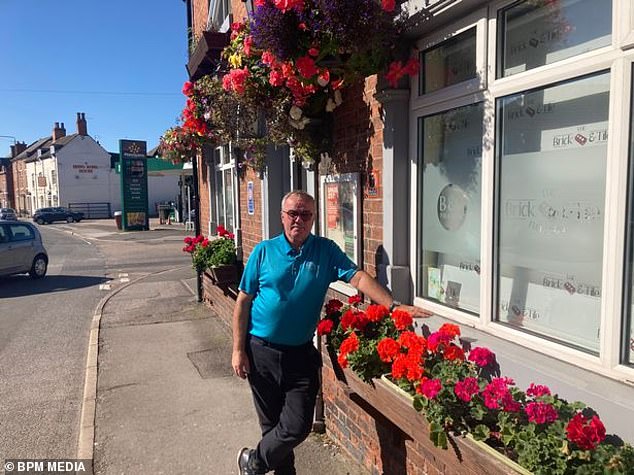 Tyson Fury, a retired heavyweight boxing champion, has his eye on a bar in Retford since the present proprietor is getting ready to leave.

The Gypsy King, 34, would want to purchase the bar, according to landlord Barry Brown, 65, who has been operating The Brick and Tile on Moorgate for the last five years.

The business is up for sale, and bids around £300,000 are being considered.

Mr. Brown said that Fury, who has already made two trips to the bar, “wants to purchase it mostly for his family.” I believe he has relatives in the adjacent community of Treswell, and he is now attempting to include this as one of his business interests.

He is a guy who enjoys some peace and quiet, so whenever he has come, it has always been during the hours when the tavern is closed.

“His brother-in-law is from the area, and he was the one who informed me that Tyson was interested, and then he brought him in to see me and to talk it.”

Fury, 34, was born in Manchester and now resides in Morecambe with his family. He does, however, have more local links thanks to his wife Paris, since the two were married in Doncaster.

After successfully defending his WBC title against Dillian Whyte in April, Fury announced his retirement in August.

Additionally, the attorneys for Tyson Fury and Anthony Joshua are now negotiating a deal for an all-British superfight scheduled for this December.

Fury is a terrific guy, and it was lovely meeting him, according to Mr. Brown. Amazingly, he needs to crouch down when he enters the bar because of how tall he is.

He informed me that he isn’t seeking to alter anything about the establishment, and many of the regulars and employees are extremely thrilled about it.

“We completely renovated it when I took it over, and now we have a nice lounge on one side of the bar and a sports bar on the other. I’ve built it up myself.” I was wanting to leave the area since I used to work in mining and am now 65 in order to simply spend some time by myself.

Built in 1880, The Brick and Tile is today referred to be a “classic drinking establishment” with a pool table, darts board, and domino team. There are four rental rooms above, but the bar doesn’t provide meals.

The majority of Retford residents were thrilled by the news. Reuben Crossley and his wife Portia just relocated to Retford to serve as the church’s new rector.

The pair, who are in their 40s, promised to stop by the tavern while Fury was in charge. That is extremely exciting, and I believe it will be fantastic news for Retford, said Portia Crossley. Although I’m not sure whether I would go in for a signature, I do believe we would walk in out of curiosity.

“I know Tyson is such a contentious figure, but it will draw a lot more attention into the area, so it is a wonderful thing,” Mr. Crossley said. We just moved here three weeks ago, and this will be a nice addition to the area.

“I’m not a huge boxing fan, but I have heard of Tyson Fury, and it is probably going to bring a lot more attention into Retford,” said 69-year-old Retford resident Pete Hynes. I haven’t gone to The Brick and Tile in years since I usually drink at the Idle Valley and the Galway.

But the pub will undoubtedly benefit from this. Since I often avoid the town centre, I’m not sure whether I’ll go, but it will be interesting to see what he brings to Retford.

There won’t be any difficulty in that place if you have someone like Tyson Fury running it, said Andrew Sharp, 56, who was in town from Doncaster and was considering opening a stand on Retford’s market.

If everything is handled properly, bringing in a big name like him will likely bring more people to Retford, which could be beneficial.

All of the family members are currently on vacation, I believe in Las Vegas, but according to what I’ve been told, Tyson will arrive to finalise everything at the tail end of next week.

Initially, I believe he intends to be quite outgoing in order to publicise the location, but I believe he will hire a member of the Morecambe family to handle day-to-day operations.

It varies greatly, but generally speaking, a handover takes eight weeks when solicitors are involved. Tyson has a fight scheduled for December, so I am aware that he is aiming to arrive and prepare by Christmas.

The undefeated Fury is renowned for frequently serenading his supporters with Don McLean’s 1971 song American Pie after a fight. The jukebox at The Brick and Tile could have one song that people want to hear more than any other by December.

Tyson Fury’s representatives have been approached for comment. Following Fury’s promise to buy the “UK’s largest gold cross and chain” that a Nottinghamshire man salvaged from being trashed for £25,000, this happened.