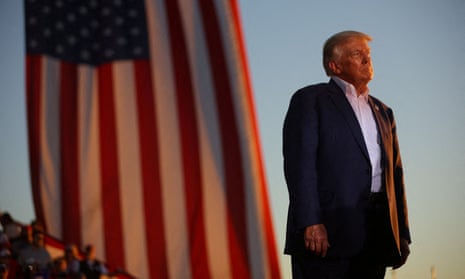 Donald Trump has demanded that the authors and publishers of the secret Supreme Court draft of Roe v. Wade be threatened with imprisonment if they do not identify the source of their explosive scoop.

Saturday night, when speaking at a rally in Robstown, Texas, the former president stated that the person who provided the draft decision to Politico for their May 5 article must be identified.

Threatening Josh Gerstein and Alexander Ward and Politico’s publishers with jail time, he claimed, was the only way to compel them to expose their sources, a violation of journalistic ethics of the highest order.

He said, “You know that in this nation leaks occur everywhere, including on the Supreme Court.”

In addition, you must locate the leaker.

Then, he demanded that they be incarcerated if they refused to reveal who had given them the draft document.

“Do you know how to locate the leaker?

‘They claim you cannot locate the leaker. He divulged every detail of Roe v. Wade.

This person never released information from the Supreme Court.

They do not wish to mention this since they believe it is so bad.

‘You take the writer – they claim they’ll never find it, they’re searching through phone records, it’s been a long time – you take the writer and the publisher of a particular newspaper. Who, you ask, is the leaker?

National defense. And they claim we will not tell you.

‘And when this person discovers that they are about to marry another prisoner, he will say, ‘I would very much like to inform you who the leaker was.’ I swear it was Bill Jones, he was the leaker!

They are unwilling to do that. But there is no other option.’