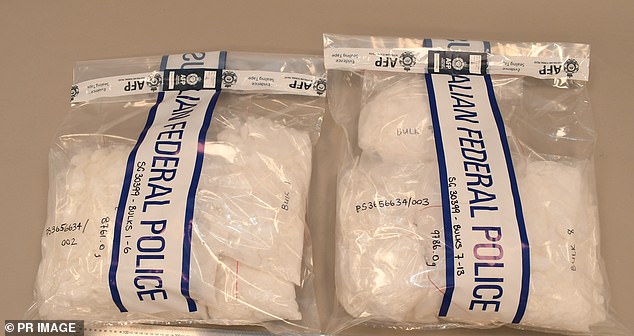 Trent James, a middle child who always felt left out, took to drugs at age 13 and is now in prison after being discovered with 144 kg of what he believed to be methamphetamine.

When he picked up a portion of the consignment in June 2020, the police had already intercepted the initial 360 kilogram shipment from Malaysia and exchanged the illegal crystal for salt.

James, now 38 years old, owned an import business for stones and stored nine boxes of pharmaceuticals he had acquired in the warehouse of his company.

Thursday, County Court Judge Michael Cahill sentenced him to thirteen years and nine months in prison for attempting to possess a commercial quantity of a border-controlled narcotic.

The cargo of heroin, disguised as domestic furniture, landed in Australia on June 4, 2020, and was seized four days later by federal authorities.

Trent James, 38, was discovered by police hiding drugs in his company’s warehouse after feeling “left out” during his drug-addled adolescence (example image of drugs in a warehouse)

Each of the shipment’s 18 boxes contained 20 kilograms of crystal methamphetamine in 1 kilogram bags. The purity of the medications exceeded 80 percent.

At his factory in Cheltenham, he unpacked the crates and then left.

The Australian Federal Police planted surveillance equipment in the factory discreetly during the night and filmed James’ return the next day.

Each of the 20 bags was emptied into a white tub after opening one of the boxes.

But when he sniffed the substance, it was odorless, unlike crystal methamphetamine, which smells like vinegar.

Judge Cahill stated that before departing, James set fire to the boxes and packing and dumped the contents of the tub into a toilet.

The court heard that the remaining boxes were later seized at the request of a Malaysian national because they “did not meet customer satisfaction.”

James, the middle child of three boys, had a rough relationship with his parents and did not get along with his brothers while growing up.

The court heard that he has always felt excluded. James began using drugs at the age of 13, was expelled from school at the age of 16, and later founded his own combat sports event company, which has assisted Australian fighters in competing in the Ultimate Fighting Championship.

Since his arrest in June 2020, he has spent more than two years in detention and has been drug-free, said Judge Cahill.

His references praised him as a rock who was always willing to serve people and was generous in his support.

Judge Cahill stipulated that he must spend eight years and nine months before becoming eligible for parole, adding that the prolonged period of supervised liberty would promote ongoing rehabilitation.

»Trent James was sentenced for importing 360kg of methamphetamine from Malaysia«