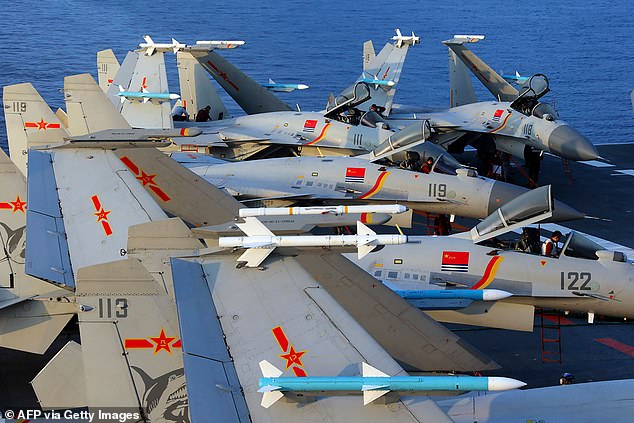 Officials warned last night that former British fighter pilots are teaching the Chinese how to shoot down Western planes.

It was discovered that up to 30 pilots had relocated to China after signing £250,000-a-year contracts to teach Western flying techniques.

The Beijing brain drain, a possible danger to national security where Chinese pilots may gain a decisive edge in any future battle, cannot be stopped by the Armed Forces due to legal loopholes.

Sources claim that several further senior Royal Air Force pilots were contacted by middlemen working on behalf of the People’s Liberation Army but turned down the offers.

Western sources said yesterday night that since its friends are also impacted, Britain was talking with them about how to handle the situation.

According to reports in The Daily Mail, lucrative contracts have also been used to entice fast-jet pilots from Australia and Canada to China.

By 2049, China aspires to be the world’s most powerful military force. Due to significant investments in aircraft carriers, stealth fighters, and artillery, its armed forces are fast growing.

A rare Ministry of Defense “threat notice” will be released today, confirming the alarming recruiting effort. The UK has just changed China’s position from “systemic competitor” to “threat” to British interests.

Last night, a government official said that “current and former advanced jet pilots are being publicly head-hunted to train pilots for the People’s Liberation Army (PLA) in China.”

The recruiting initiatives endanger the interests of the UK and other Western nations. They are being carried out by outside companies, and the compensation is extremely significant.

It is virtually probable that these individuals are improving China’s knowledge and skills. Without our intervention, this conduct would very probably undermine the defense advantages enjoyed by the UK and its allies.

The source said, “We are providing threat information to employees who may be targeted by headhunters. We are also reminding staff members of their responsibility to safeguard private information they may have obtained while working for us.

“We need to take precautionary measures,” the statement reads. “While we lack the legal means to force individuals to return [from China].

According to Western authorities, the practice started in 2019, dropped down during the epidemic, and then picked up after Covid restrictions were eased in China.

Since the security agencies would detect any direct approaches from Beijing to RAF fast-jet pilots, the Chinese employ a private flying school in South Africa to serve as a middleman.

According to Western authorities, the TFASA has invited RAF Typhoon, Jaguar, and Tornado pilots to move to China to work as PLA instructors. Pilots of UK military helicopters have also been contacted.

The Ministry of Defence is attempting to tighten the legal requirements around retired pilots imparting their expertise.

The Chinese will use all methods at their disposal to learn in-depth information on the technology behind our military aircraft as well as the pilots’ knowledge of British and ally tactics.

The Ministry of Defense stated: “We are taking decisive steps to stop Chinese recruitment schemes attempting to head-hunt serving and former UK Amed Forces pilots, who are already subject to the Official Secrets Act. I think the pilots are… misguided, greedy, and naive and now a threat to national security.”

“While the new National Security Bill will offer new measures to combat security concerns, including this one, we are examining the usage of secrecy contracts and non-disclosure agreements.”