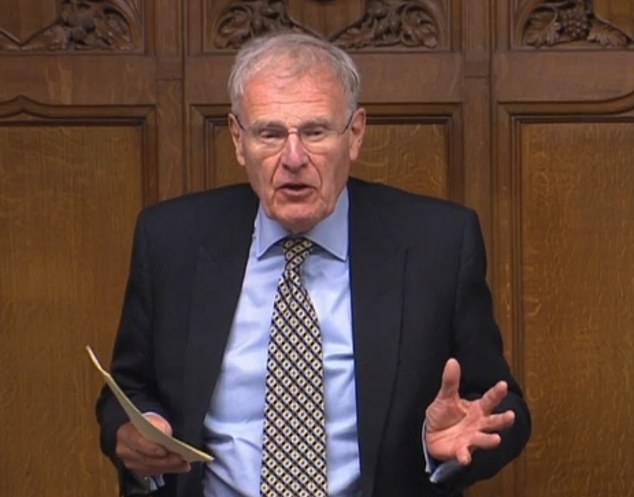 MPs who support Liz Truss have referred to those scheming against her as “a group of hyenas” who, despite their own increasing uneasiness, won’t accept the results of the Tory leadership contest.

In response to rumors that MPs are supporting her previous leadership opponents Rishi Sunak and Penny Mordaunt on a combined ticket to lead the nation, the PM’s supporters have said that the departure of the PM would be “suicide.”

The Prime Minister did an embarrassing U-turn on her hallmark economic policy on plans to retain business tax at 19p in a speech yesterday, which occurred shortly after she fired Chancellor Kwasi Kwarteng.

Later, The Daily Mail claimed that a group of around 20 top rebel MPs—mostly Sunak supporters—met over curry to discuss plans to overthrow the prime minister.

Since then, Truss supporters have united behind her despite their own mounting concerns about the condition of the Tory Party.

Sir Christopher Chope, a supporter of the PM, said that the party’s decision to replace her as leader would be “suicide.”

He told The Telegraph, “If that’s how my colleagues act, then I can’t stop them, but, honestly, I think they’re like a pack of hyenas.”

“I believe that forcing out another prime minister who is doing her best in extremely challenging circumstances would be death for the Conservative Party.”

He continued by expressing his “desperation” about how Miss Truss has been “pushed off course by the markets” in addition to some of his fellow MPs.

The Christchurch MP has urged his colleagues to “shut up” while criticizing the PM.

Sir John Redwood of Berkshire, a key ally of the Prime Minister during her leadership contest, pleaded with lawmakers last night to remember the outcome of the poll, which she won with 57.4%.

But when the PM replaced Kwarteng with Jeremy Hunt and made yet another policy U-turn last night, doubt among devoted supporters seemed to be rising.

Chris Loder, a supporter of Truss, expressed his optimism that she will be able to continue, but he also acknowledged that he had heard from the parliamentary party and some of her backers that it is now rather tough.

Detractors, however, were enraged, with one former Cabinet member telling MailOnline that “she needs to go.”

“She is the head fireman and she burnt the house down.” They questioned, “Why isn’t she following Kwasi under the bus? She is now going to be governing the nation on ideas that she destroyed entirely in the leadership battle.”

Suella Braverman, the home secretary, was one of the members of the Cabinet to share a graphic from the address in which she vowed to “always work in the national interest.”

It comes after a heated WhatsApp chat in which former culture secretary Nadine Dorries said that any effort to remove and replace Truss may be undemocratic, which was revealed yesterday.

Former minister Crispin Blunt said to a gathering of Conservatives, “Our nation needs emergency repair.” With our encouragement and support, Rishi and Penny should advance in the best interests of everyone.

Followed by a general election? Ms. Dorries responded. I like you Crispin, but you need to take a nap if you really believe that we can impose another leader without one, that the public and the media will support it.

Regardless of whether Truss is expelled by her own party, Labour leader Sir Keir Starmer called for a general election this morning.

One insider subsequently added, “It’s not only about the survival of the Government or even the Conservative Party.”

“People are really suffering because of the ineptitude we have seen; I have acquaintances who are unable to get a new mortgage.” We owe it to society to put a stop to this and reestablish a fundamental level of competence.

Another person said, “We’re sinking, but there’s still a chance to find anything among the rubble.

“If we allow things to continue as they are, we will perish; it will take ten years to reconstruct.” We cannot allow it to occur.

At the late-night gathering, strategies predominated over personality.

One of the attendees observed, “If this is going to succeed, we need to make it less about the leader — whether it be Rishi or Penny [Mordaunt] or anyone — and more about the team.”

“We need to put together a squad of all the skills and strive to show a cohesive face.”

No matter how many letters of no confidence are sent by MPs, according to Tory party rules, a formal challenge against a new leader is not permitted for at least a year.

The main topic of discussion was whether Sir Graham Brady, the Tory shop steward, or the Cabinet could convince Liz Truss to resign.

However, other suggestions were made, such as contacting past leaders Sir John Major, David Cameron, Theresa May, and others to launch an unprecedented collective intervention. A source said, “Except for Iain [Duncan Smith], none of them are pleased.”

The majority of them, in fact, are shocked by what they saw.

With the exception of the unwavering conviction that the new leader should be installed by MPs without a vote from the party’s members, there was no consensus on the precise course of action.

According to one former Cabinet minister, “there is no way we are leaving this to the members.” “They simply gave Liz to us.”

“We won’t ask them again,” was said. Last night, there was talk that the PM’s decision to fire Kwasi Kwarteng would be the catalyst for a significant senior-level intervention against her.

Nadine Dorries called the conspirators’ plans “absurd” and said they were “all Sunak followers.”

They fought to get Boris Johnson removed, and they will keep conspiring until they succeed, she claimed.

It is a plan to undermine democracy, not to oust a prime minister. The “Poppadom Plot” is far from Miss Truss’ sole danger, however.

After a contentious party convention, she sought to assemble a Cabinet of supporters, but some already seem to be defecting.

Suella Braverman, the home secretary, has openly criticized the PM’s decision to reverse course on the 45p top tax rate and argued with him over immigration and drug policy.

One pastor said, “It is unbelievable.” She continues to campaign and doesn’t seem to care whether anybody knows it.

Senior MPs assert that while serving in the Cabinet, Miss Mordaunt is ‘openly’ soliciting support from MPs.

When the PM sought to establish the rule on collective responsibility during a meeting of the Cabinet on Tuesday, sources said the Commons leader, who has openly criticized Miss Truss’s proposal to reduce benefits, turned away.

Grant Shapps, the former transport secretary who was summarily fired by the prime minister last month, has become a regular at Portcullis House, speaking with uneasy Conservatives and compiling a list of possible dissidents on his Samsung smartphone.

Michael Gove is another option. Since last week’s Tory conference, when he single-handedly scuttled the PM’s intention to eliminate the highest rate of tax, the arch plotter, who twice assisted in the downfall of Boris Johnson, has maintained a low profile.

At a meeting of the 1922 Committee on Wednesday evening, Miss Truss made an effort to rally the troops by answering questions from backbench MPs for an hour.

But it really made things worse. Robert Halfon, a reputable former minister, charged her of “trashing” more than ten years of effort to increase Tory support among blue collar workers.

Grim-faced lawmakers who were leaving the meeting said it had a “funeral” mood.

A former minister said, “People are afraid.” “Almost everyone wanted her to succeed, but it’s been a catastrophe,” said one person.

“The worst part is that she offered us no hope that she can get us out of this or even that she recognizes how horrible it is – almost as if she were on TV instead of talking frankly with colleagues,” one person said.

Things might become far worse. Due to her choice to abandon a large portion of her economic vision, Miss Truss is now open to criticism from even the MPs who previously supported her. One of them added, “Her leadership power is now destroyed.” “Party discipline has completely collapsed.”

The future of Miss Truss is not yet decided. Her opponents are split about who should be the future leader and lack a clear strategy for ousting her.

The people wouldn’t let another change of leadership without a vote, according to Philip Hammond, who is not a fan of the PM’s political views, and I don’t think Conservative MPs want a vote either.