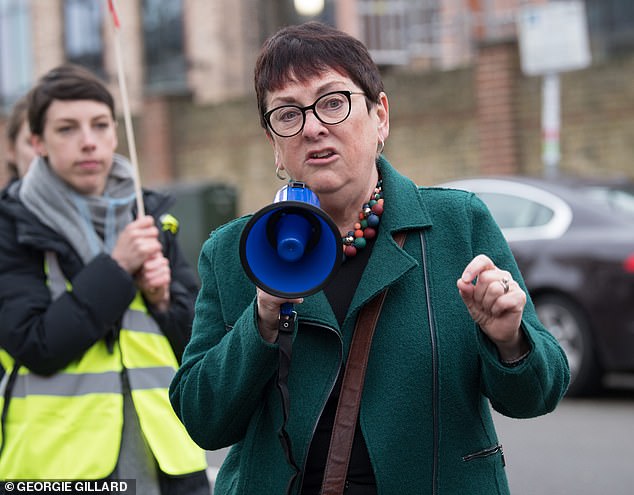 Before Christmas, nine out of 10 teachers may support a strike that would force all English schools to close over salary issues.

According to data from the main education union, the National Education Union (NEU), hundreds of thousands of teachers may decide to join rail and postal employees in their fightback, sparking unrest throughout the nation.

In an effort to spread their message, up to 30,000 members have declared that they would participate in a strike as volunteers.

In reality, when angry instructors expressed their worries, the NEU poll, which was sent to 450,000 members, caused the website to breakdown.

With a fortnight left in the online poll’s current 7,000 replies, an insider has informed the union would allow for a formal vote on striking.

According to Mary Bousted, general secretary of the NEU, “teachers do not want to strike, but they are quitting the profession in droves.” They use striking as a final option to make a message that things cannot continue in this way.

It will make both parents’ lives much more miserable if their kids missed extended stretches of school due to the Covid-19 outbreak.

Following the Department of Education’s announcement that the majority of teachers will get wage increases of 5%, with increases of 8.9% for newly certified personnel, teachers are now asking for raises above inflation.

However, additional strike actions spell disaster for the nation since the retail price index (RPI), which monitors inflation, reached 12.3% in August.

Due to more than a decade of salary concerns, where actual pay has decreased by a fifth since 2010, schools are experiencing a teacher retention crisis.

As the cost of living problem takes hold of regular daily costs, desperate teachers are being forced to resort to food banks.

Paul Whiteman, general secretary of the NAHT union, recently stated: “School leaders will be forced to make cuts that ultimately cannot help but have a negative impact on the education and wellbeing of children. The spiraling energy bills, inflationary costs, and lack of funding for teachers’ pay this year.

We urge all political parties to pay attention to the profession in order to fully comprehend the connection between financing, pay, and children’s life prospects and to commit to making the investment in education that is so desperately required.

In reality, over one of the busiest athletic weekends of the year, unions initiated the largest train strike in decades, causing travel mayhem for customers yesterday.

On the same day as members of the Aslef, RMT, Unite, and TSSA unions started a 24-hour strike over issues including wage and working conditions, 50,000 railway employees went on strike.

Only 11% of services are in operation as a result of the main rail unions organizing walkouts concurrently for the first time in history.

The commotion continues into Monday, when tens of thousands were expected to flock to the city to witness the renowned marathon in London.

Mick Lynch, the head of RMT, shot off suggestions that the unions were after the marathon, insisting instead that their goal was to disrupt the Conservative Party Conference in Birmingham, where Liz Truss is being grilled about her contentious tenure as prime minister.

The’momentum’ of the wage issue, according to Mr. Lynch, must be maintained. He referred to the public’s support for the union, saying: ‘There are individuals who are inconvenienced who are supporting us every day on the picket lines.’

Those inconvenienced by the strikes must pay fast escalating costs for necessary travel, including more than £350 in taxi charges.

Schools may even be compelled to operate on less than five days a week if teachers go on strike because they are unable to get paid, keep up with mounting expenses, and give free lunches to students.

As a result of the new energy price limit, gas and electricity prices increased on October 1 and the country was forced to pay even higher daily living expenses.

A formal vote is scheduled for November, but the union is already considering demonstrating during local and national strike days in December, January, or February as teachers and schools push back.

A majority of 40% of those voting must be in favor of the measure with a 50% turnout for it to be legal.

Pay conflicts have become such a hot topic that 50% of poll respondents for the typically moderate Association of School and College Leaders (ASCL) supported a strike vote.

He continued by saying that top officials all the way down to financing and teacher shortages are “hugely frustrated” over remuneration from the previous ten years.

The NASUWT, the second-largest teachers’ union, allegedly plans to conduct votes as well after discovering that 72% of the 8,750 teachers questioned felt the salary award should be rejected.

‘We have approved the biggest pay awards for teachers in a generation – 8.9% for new teachers and 5% for experienced teachers and leaders — honouring their commitment and hard work,’ a Department for Education spokeswoman said.

We acknowledge that schools, like the rest of society, are under financial strain. In order to assist schools in covering these additional expenses, we are raising core school funding by £4 billion this year compared to 2021–22.

The possibility of strike action by certain unions in schools is really disappointing. Children’s education will suffer from a strike, and parents’ life would be disrupted. Avoiding strike action is more crucial than ever given the pandemic’s effects on youngsters.