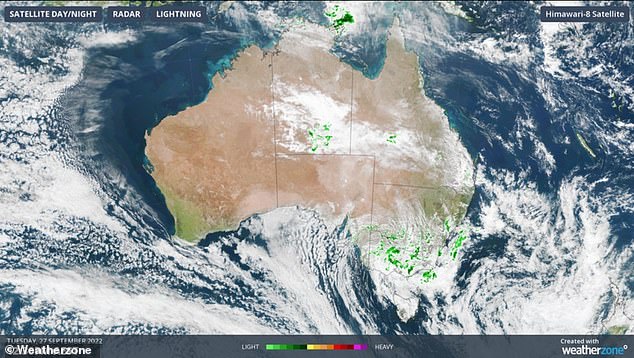 Over the next ten days, the east coast is expected to be battered by a number of strong rainy weather systems.

After portions of southern Queensland were slammed by torrential rain and golf ball-sized hail on Tuesday, southern New South Wales and Victoria’s East Gippsland region are expected to get the worst of the bad weather this week.

On Wednesday and Thursday, the system is predicted to deliver storms to southeast Australia, with the region receiving the highest rainfall over the NSW coastline from Sydney southward and in eastern Victoria.

By Wednesday morning, a rain belt will concentrate across southern New South Wales and eastern Queensland, while storms and showers are expected to return to most of eastern Australia, according to Sky News meteorologist Alison Osborne.

“On Wednesday, this cold air lying over NSW will destabilize the atmosphere, creating a highly conducive setting for substantial storm activity once again.”

‘Supercells,’ the most hazardous category of severe storm, may hurl golf ball-sized hailstones to tired southeastern Queensland and northern NSW, according to Ms. Osborne.

Dean Narramore of the Bureau of Meteorology predicted that East Gippsland in Victoria’s interior and southern New South Wales will see the highest rainfall.

In addition to localised flash floods, moderate to heavy rainfall might cause minor flooding in some of the rivers in that region later tonight and into tomorrow, the forecaster told Sunrise.

“Severe storms from Newcastle to southeast Queensland are probable. We will see a widespread 30mm to 50mm with isolated larger rainfall down there.”

The Illawarra, the South Coast of New South Wales, and southeast Victoria, the forecaster said, could fortunately “handle a bit more rain,” although several rivers in those regions were overflowing.

He said that the bureau would be concentrating in the coming days on a different weather system that was forming in Western Australia and was expected to deliver the state even more significant rainfall this week and into the weekend.

During the middle of next week, Mr. Narramore predicted that the same system will bring heavy rain and thunderstorms to Australia’s central and eastern regions.

That is concerning, he said, especially for the towns in northern Victoria and in NSW on and west of the Ranges. That will probably cause many of our flooded rivers, creeks, and streams to increase in level once again.

According to Ms. Hogan, the agency anticipates that the protracted flooding in western and interior NSW will continue for a while. She urged locals to exercise caution.

Check live traffic or the local authority websites to see whether flooding is happening during the school vacations, she said.

If there is water on the road, parents are encouraged to take an alternative route to keep their kids out of the “unhygienic” floods.

This month is shaping up to be the wettest September since 2016, with areas of southern Queensland including Warwick, Logan, and Boonah seeing significant rain on Tuesday as the wet weather system took grip of the east coast.

According to Weatherzone, the low-pressure system was causing strong winds to blow over NSW, Victoria, Queensland, and Adelaide in a clockwise route.

Darwin will also have showers, with locals anticipating rain and thunderstorms on the majority of days during the next week and into the first week of October.

The Northern Territory’s Western Top End and Western Australia’s North Interior are predicted to get the most rain in Australia’s northern tropics.

The dry season might end abruptly in certain interior regions of Western Australia due to 100 to 200 mm of rain expected during the next seven days, according to Weatherzone.

In Victoria, there is still some minor flooding along the Kiewa and Loddon Rivers, and the northern, eastern, and central catchments are under a flood watch.

According to BOM, the greatest falls in the 24-hour period ending at 9 a.m. on Tuesday were 44 mm at Cape Otway, 41 mm at Mount Sabine, and 33 mm at Apollo Bay.

The Gold Coast, Ipswich, portions of Brisbane, the Scenic Rim, the Southern and Darling Downs, South Burnett, and the Cape York Peninsula were all included in the severe thunderstorm warning for Queensland.

On Tuesday night, there were thunderstorms all throughout New South Wales, but especially in the northeast and in the Illawarra area to the south of Sydney.

There are now 16 flood warnings in effect around the state, with the Namoi, Bogan, Lachlan, and Macquarie Rivers experiencing serious flooding.

It is anticipated that the unpleasant rainy weather pattern would last for at least 10 days.

According to Weatherzone analyst Joel Pippard, the deluge will become worse during the week, with Sydney, Brisbane, and maybe Canberra being soaked with showers and possibly getting a storm on Monday.

As a low pressure system moves westward from Alice Springs, he predicted that “every river west of the Great Dividing Range” will see some kind of flooding.

A “pretty large system,” according to Mr. Pippard, will move east across the Northern Territory and South Australia on Monday before making landfall on the east coast on Wednesday.

Residents are warned to keep an eye on local predictions as the system is predicted to collide with a cold front and deliver considerable precipitation to Victoria, Canberra, and NSW.

Fortunately, the rain would probably just make the existing floods worse since the Murray River in southern NSW was in danger of overflowing.

Just the last month has seen some catchments in northern Victoria and southern NSW surpass more than 200% of annual rainfall.

Floodwaters in Wee Waa, roughly 120 km to the northwest, are still slowly receding but may continue to rise into the next week.

If the summer brings significant rain, Mr. Campbell said, “we may definitely have a record flood—likely something we haven’t seen since the 1970s.”