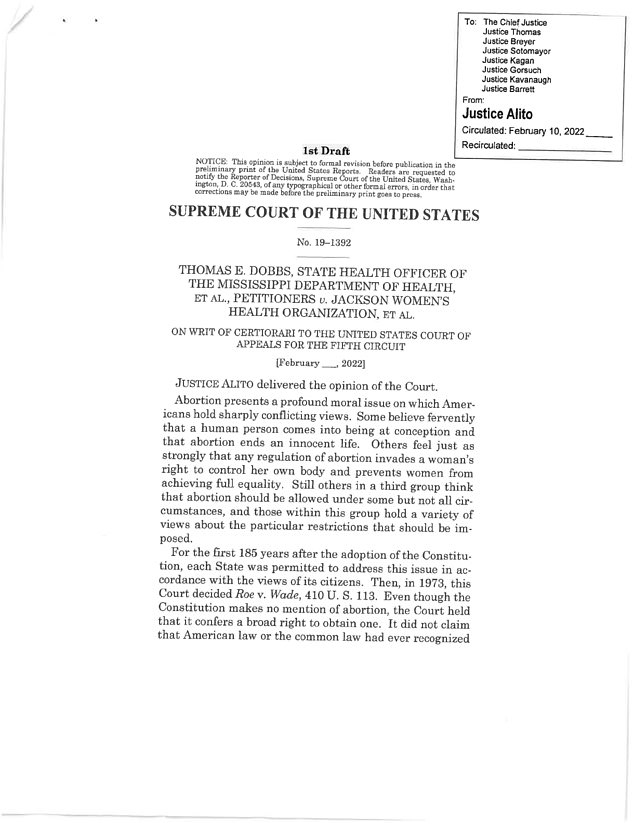 In an interview with CNN’s Chris Wallace, recently retired liberal Supreme Court Justice Stephen Breyer stated that, as far as he knows, the identity of the mysterious leaker of Justice Samuel Alito’s opinion draft on the overturning of Roe v. Wade remains unknown.

According to a transcript published by the network, Wallace inquired about the May leak: “Within twenty-four hours, the chief justice ordered an investigation into the leaker.” Have they located the individual?’

Breyer said, “Not to my knowledge, but I’m not privy to it.” Wallace pressed, “So, in those months, the top justice never announced, “Hey, we’ve got our man or woman?”

To my knowledge, no, answered Breyer, who keeps an office at the Supreme Court despite being retired.

His revelation comes as a massive inquiry into the leak, the most stunning in Supreme Court history, unfolds.

It is unknown if the document was leaked by a liberal outraged by the June decision to overturn Roe v. Wade or by a conservative wanting to rally support for the proposed act.

The interview will run on Who’s Talking to Chris Wallace? on Sunday.

Stephen Breyer, a recently retired liberal Supreme Court justice, stated that he is not privy to the investigation, but as far as he is aware, the leaker has not been apprehended.

The then-president, Bill Clinton, nominated Justice Stephen Breyer. Before his retirement and replacement by Justice Ketanji Brown Jackson, he is shown with his fellow judges in April 2021.

Gail Curley, the Marshal of the Supreme Court, has been tasked with identifying the leaker, although it appears that no progress has been made in this regard.

Other judges have recently hinted that the court does not know the identity of the leaker.

At a conference in Colorado this month, Justice Neil Gorsuch stated that identifying the leaker is “very critical” and that he expects an update on the investigation’s progress “hopefully soon.”

Justice Elena Kagan stated lately that she does not sure if the Roberts-ordered probe has identified the source of the leak.

A May report from the Washington Post hypothesized that the leaker may be a clerk for one of the justices.

The Post story emphasizes that the selection of clerks is increasingly based on the lawyers’ political stance as much as their legal expertise.

ABC News theorized that the leaker was a member of the court’s right side who did so in the belief that the leak’s exposure would solidify the majority of five votes.

Former Army colonel and military attorney Gail Curley, the Marshal of the Supreme Court, has been tasked with discovering the leaker.

She has not commented on the status of her investigation.

“I’m convinced that if the truth can be discovered here, she will find it and convey it objectively,” said retired Army Brig. Gen. Patrick Huston, her immediate supervisor at the Pentagon in her last military position before the Supreme Court.

Huston remarked that he was quite pleased by Curley and that she had a stellar reputation as a leader, but despite being her supervisor for two years, he was unaware of whether she had a partner or children.

A May report in the Washington Post theorized that the leaker could be a clerk for one of the justices.

Kate Shaw, a contributor to the network’s Supreme Court coverage, stated, “The notoriety will dissuade them from doing so because they will fear giving the message that they were intimidated into changing their votes by public backlash or public encouragement.”

It is also possible that the leaker was so distressed by the thought of overturning Roe that telling the public as soon as possible was of utmost significance.

In 1973, Chief Justice Warren Burger was enraged by the leak of the Roe case’s verdict several hours before its official announcement.

Burger threatened to do lie detector tests on its staff, but the leaker soon confessed that it was an accident.

Earlier in the discussion, Breyer expressed regret for being on the losing side of the Dobbs decision that reversed Roe v. Wade.

“And you ask if I approved of this Dobbs decision? Of course I didn’t. ‘Of course not,’ he stated in an interview with CNN’s Chris Wallace for a Sunday night broadcast. Was I pleased with it? Not even for a second Did I make every effort to persuade others? Obviously, obviously. Nevertheless, we are where we are, and we will proceed. We attempt to collaborate.

He cautioned his Supreme Court colleagues that too stringent verdicts will “come back to get you in the rear.”

Because you will discover that something you observe does not operate at all. And the Supreme Court, unlike other institutions, has this problem in plenty,’ Breyer remarked.

The conservative justices wrote that the implicit ‘right to privacy’ in the Constitution did not exist, reverting abortion law decisions to the states.

Justice Stephen Breyer (right), who retired earlier this year, sat down for a Sunday interview with CNN’s Chris Wallace.

Unprecedentedly, a source within the high court leaked a draft of the ruling to the press prior to its June delivery.

When the text of the Dobbs judgment was released in Politico, Wallace questioned, “Was there an earthquake in the courtroom?”

‘An earthquake?’ Breyer asked. ‘It was really harmful because such occurrences are so rare. It just doesn’t happen. And so we’ve arrived.

As a liberal, he decided to resign while the Democrats controlled the White House and the Senate.

Breyer stated, “There have been delays when the party is divided between control of the Senate and control of the presidency.” And at times, I would prefer that neither my retirement nor my membership on the court be entangled in what I regard to as merely political problems.

In addition, he refused to attack Ginni Thomas, the wife of conservative Supreme Court Justice Clarence Thomas, who is scheduled to testify before a House select committee on January 6 regarding her participation in attempting to change the results of the 2020 presidential election.

Breyer stated, “I strongly believe that women who are wives, particularly wives of Supreme Court justices, must make their own judgments regarding how to lead their lives, careers, what kind of career to pursue, etc.”

I will not disparage Ginni Thomas, whom I admire. I will refrain from criticizing Clarence, whom I like. And there we are,’ remarked the liberal justice.

Breyer stated that while there are ‘sometimes’ two distinct groups on the bench, the animosity is ‘less than you might anticipate.’

Breyer stated, “Less than you believe… yet I cannot say never.” Maybe a little less merry, but I haven’t heard anyone in the conference room yelling at each other in anger.