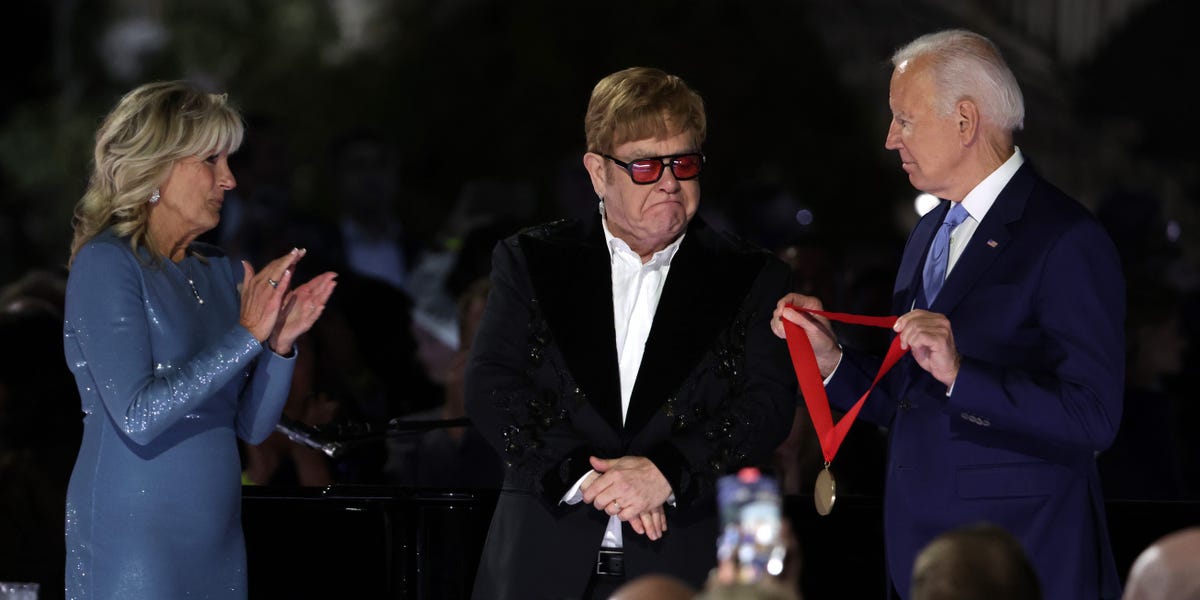 When President Joe Biden unexpectedly presented him with a National Humanities Medal during a performance at the White House on Friday night, British artist Sir Elton John started to cry.

Presenting Sir Elton John with the National Humanities Medal tonight is a wonderful pleasure for me, Biden stated.

Biden was presenting John with the medal, according to an announcer, for “stirring our spirits with his magnificent voice” and for his advocacy legacy.

John, 75, started the Elton John AIDS Foundation in 1991 after decades of activism in the fight against HIV/AIDS.

Before hugging the president, the musician wiped tears from his eyes briefly, showing that he was obviously stunned.

The renowned singer said, “I just stated to the First Lady that I’m never astounded, but I’m flabbergasted, humbled, and honoured by this great award from the United States of America.

John said, “I will cherish this so much and it will make me quadruple my efforts to ensure that this cancer goes gone.”

As part of A+E and History’s “A Night When Hope and History Rhyme,” John gave a performance on the South Lawn.

John remarked before starting his performance, “It’s amazing to be here among so many people who have benefited my Aids Foundation and my heroes, the ones who work day in and day out on the frontline, teachers, nurses, everyone who’s helped.”

Over the course of the evening, he performed many of his classic songs, including “Tiny Dancer,” “Rocket Man,” and “Your Song,” according to Variety.

Regarding the artist, Biden stated, “On behalf of the American people, thank you, and I honestly mean this, thank you for touching the spirit of our country.”

The National Humanities Medal, established in 1997, recognises people or organisations whose contributions have broadened American awareness of the humanities.