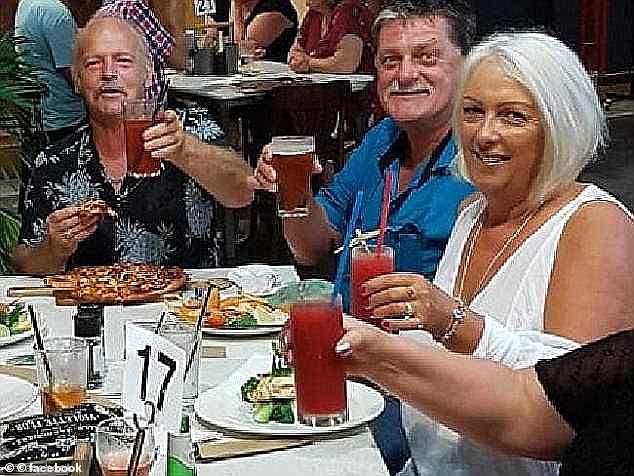 A week before his corpse was discovered in a woodchipper, a woman suspected of planning to kill her ex-partner reportedly questioned her two lovers why he hadn’t already been slain.

On Tuesday, the Brisbane Supreme Court heard testimony from Sharon Graham, who reportedly questioned her two boyfriends about Bruce Saunders’ unsolved murder one week prior to his corpse being discovered in a woodchipper.

After Mr. Saunders, 54, passed away in November 2017 while working on a property north of Brisbane, Gregory Lee Roser, 63, is now on trial for murder.

The murder of Mr. Saunders was also denied by Graham, 61, but a Brisbane Supreme Court judge on Tuesday ordered that she be prosecuted separately from Roser.

According to testimony given in court, he and another guy, Peter Koenig, were urged to murder Mr. Saunders and make it seem like an accident in order to collect his $750,000 life insurance policy.

The jury has seen police film showing Mr. Saunders’ legs sticking out of a woodchipper on the Goomboorian farm outside of Gympie after he and Roser and Koenig had been cutting down trees there.

According to the court, Koenig pleaded guilty in June to being an accessory after the fact to murder.

About three months before Mr. Saunders’ death, according to Koenig, Graham requested him to meet her and Roser at a hotel in Gympie, claiming she had arranged for the property to be vacated.

Koenig responded to the jury’s inquiry about Graham’s other comments by saying, “About murdering Bruce – Sharon wanted him murdered.”

If you asked Koenig why, he said, “Money. I believe it to have been life insurance money.

Koenig said that they had “simply agreed,” but he had no desire to murder Mr. Saunders.

When Roser’s ex-partner Saunders died, Graham was seeing Roser, and Koenig said they had an intimate connection.

They went back to Mr. Saunders’ Nambour house, which he shared with Graham, who slept in a different bedroom, after leaving the property for a second consecutive weekend.

Koenig said that Graham questioned why her ex-partner was still alive when Mr. Saunders took a shower.

Koenig told the jurors, “She inquired what was going on and why it didn’t happen.”

Graham reportedly said, “Well, it’s got to be done,” when informed that the chipper was “acting up” and that there were too many people around, according to Koenig.

Mr. Saunders’ corpse was discovered in the chipper the next weekend.

In order to murder Mr. Saunders, Roser is said to have struck the man in the skull with a metal rod before he and Koenig put the corpse into the chipper.

Koenig said that Graham and Roser had requested to borrow his revolver a week before to the hotel meeting in order to kill some rabbits, but had given it back because it was “too loud” a fortnight later.

According to the Crown, Graham allegedly planned Mr. Saunders’ murder for up to six months, urging Roser to kill her ex-partner at one point before giving up on the scheme.

Graham would have a separate trial, and her case will be reviewed in October, Justice Martin Burns previously informed the jurors.

After the combined trial of Roser and Graham started its second week, the jury was informed.

Justice Burns said, “Sometimes it is asking too much to anticipate that you can give distinct treatment to various instances.”

“To expect you to evaluate the matter separately would require you to engage in inconceivable mental acrobatics.”

“That point has been reached as far as the case against Ms. Graham is concerned.”

I hereby release you from having to provide a decision in her case; when you return, the trial of Mr. Roser will resume.