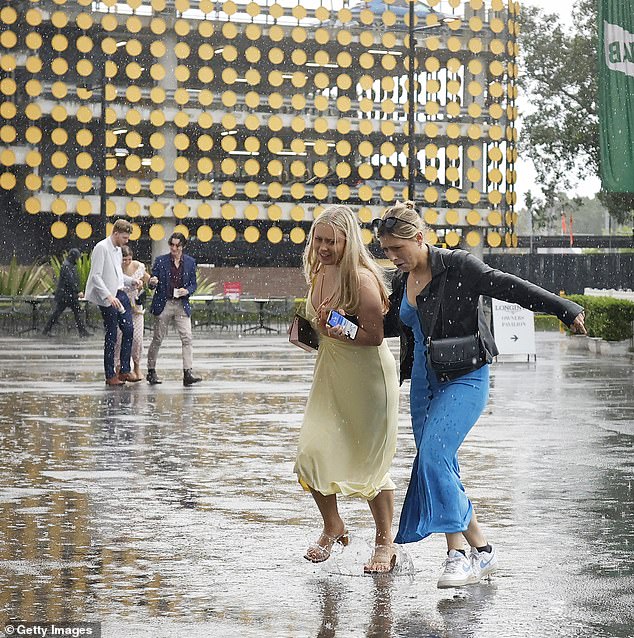 After several days of heavy rain, storms have started to move away from Australia’s east coast, but gale-force winds are still predicted and flood warnings are still in effect, so the area isn’t quite out of the woods.

As the low pressure system that forced thousands to leave their homes and resulted in 21 water rescues finally goes out to sea, strong winds are expected to batter NSW on Sunday.

But on Tuesday night in central Western Australia, a 2,500km-long rain belt is expected to start developing.

Early on Wednesday morning, the band is anticipated to travel eastward and bring light to moderate rains to southeast Western Australia and southern South Australia.

By Wednesday noon, the low will have completely covered south-central WA, all of SA, all of Victoria, and central and southern NSW.

Central NSW and north Victoria are expected to get the worst amounts of rain on Thursday morning.

“There is a chance that more than 100mm will fall.” According to Weatherzone meteorologist Bob Neil, the central west and northwest of the state could get lesser rainfall, but still enough to result in catastrophic floods.

On Sunday morning, the NSW SES issued an evacuation order for guests at the Western Plains Tourist Park near Dubbo owing to floods.

Additionally, Gronos Point and the camping area at Oura Beach are under an evacuation order.

As runoff from last week’s severe rain, which saw some regions get 100mm in just three days, continues to drain, a number of additional catchments are still in danger of flooding.

The town of Dubbo in central New South Wales received around 90mm of precipitation, making its annual total of 880mm the highest in 49 years. Only 10mm separate it from becoming the wettest year since 1950.

Many Supercars fans left the Bathurst 1000 early on Saturday due to the closure of many flooded roads and continuous warnings.

For the first time in Bathurst history, the race’s Top 10 Shootout was postponed due to yesterday’s rain in the little central-west town.

All of the event’s parking lots and pathways were immediately covered in thick mud, and numerous cars were stuck.

In campsites, the situation was significantly worse, leaving many partygoers with wet and muddy sites.

On Sunday, increased foot traffic is anticipated to saturate the still-soaked ground, making the situation for guests worse.

Thankfully, race day seems to be mostly clean and free of the slick conditions that claimed numerous vehicles in qualifying yesterday.

Fortunately for Sydney residents, most of the rain is expected to miss the harbour city next Friday.

This Sunday, Brisbane should have its last showers for the next seven days, with a few more forecast before the system heads out to sea.

Through the impending rain belt, Perth could see generally bright skies with maximum temperatures in the low 20s.

Unfortunately, rain is predicted to begin falling on Adelaide from Tuesday until the end of the work week.

The rain will arrive in Hobart a bit later, with a high likelihood of showers predicted every day starting on Wednesday.

On Sunday, storms are predicted to hit Darwin, with up to 15mm of rain possible.