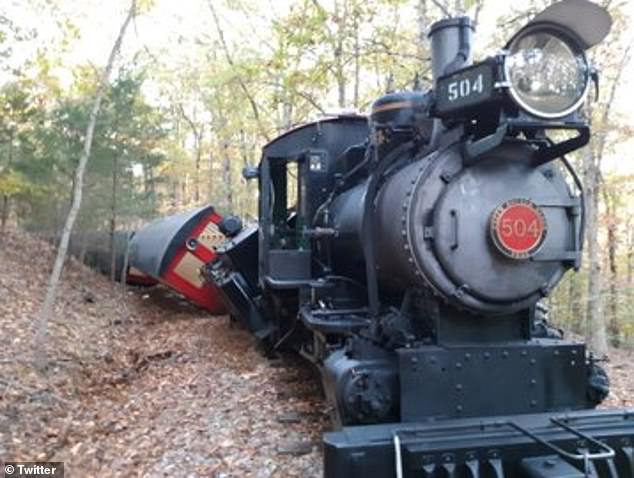 Wednesday evening, a steam train in a Missouri amusement park derailed and tipped over after hitting a ‘bump,’ sending seven people to the hospital.

The Frisco Silver Dollar Line Steam Train at Silver Dollar City in Branson, Missouri tipped over during its 20-minute ride, which features a staged train robbery and is advertised as a “leisurely ride through the beautiful Ozark countryside.”

According to those on board, some passengers were forced to break train windows in order to escape.

According to Tom Martin, director of Stone County’s Office of Emergency Management, the train was nearly full when it veered off the tracks and crashed on its right side.

Following the incident, seven passengers were transported to the hospital with non-life-threatening injuries.

No one sustained life-threatening injuries, but one passenger sustained severe lower back injuries and a woman’s glasses smashed into her face.

Silver Dollar City released a statement late Wednesday confirming the crash, saying ‘sections of the Frisco Silver Dollar Line Steam Train derailed from the track,’ but did not offer an explanation for the derailment.

“On-site paramedics provided emergency care until the arrival of first responders,” Six guests and one employee have been transported by ambulance to nearby medical facilities,’ they added.

Silver Dollar City could not be reached for comment on the cause of the incident, but Missouri’s Division of Fire Safety said they will be investigating the incident.

A tweet from the division said they began their investigation on Wednesday night and would continue on Thursday.

The train ride is known for being a staple at the theme park and has been in operation since 1962.

Passenger Gary Eldridge, who took a video of the crash, was on the train with his family when it derailed, he told CNN.

‘We had just passed the part of the ride where they gave the moonshine skit,’ Eldridge said.

‘We went around the next corner and the car in front of me acted like it hit a bump and started shaking real bad. It derailed and dragged the preceding cars with it,’ he recalled.

Eldridge and his family were unharmed since they were in one of the vehicles that did not go over.

According to a local report, another passenger reported there was a young boy on the train who was delighted to go, but after the accident he declared he no longer liked trains.

“At this time, we are solely focused on assisting guests and team members in collaboration with Stone County first responders,” the park’s statement read.

The amusement park is situated amid the famed Ozark mountain range, a popular vacation destination in the Midwest. Lake of the Ozarks is a vast lake that attracts tens of thousands of summer visitors.

In 2018, seventeen people perished after a duck boat, an amphibious vehicle from World War II, sank on Table Rock Lake in Branson.

All of the victims were on board the Ride the Ducks amphibious craft when a severe storm came across the lake and pounded the water with 60 mph gusts.

As it was being overwhelmed by waves, people in nearby boats stared helplessly. They captured terrifying footage of the action, which abruptly ended shortly before the boat sank.

The ages of the deceased range from one to seventy. One of them was the boat’s captain.