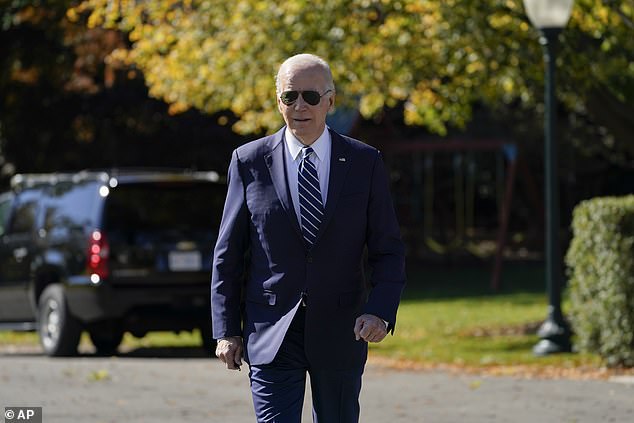 On his approach to Marine One, the president praised a fresh report on the nation’s gross domestic product, which indicated that the economy expanded at an annual pace of 2.6% in the third quarter. He stated it was evidence that his economic plan is effective.

In a speech in New York, the president will contrast his economic outlook with that of congressional Republicans. He will criticize the Republican Party for seeking to eliminate some of his programs and replace them with tax cuts for the wealthy.

Ahead of the election on November 8 that will determine the power of Congress, voters have cited the economy as their leading worry. Inflation has increased the cost of living for Americans, including essentials such as food, petrol, and shelter.

Republicans have criticized Biden’s economic management. In addition, voters give him negative grades on this topic.

The president is fighting back by citing the successes of his administration, such as the American Rescue Plan, his bipartisan infrastructure package, the CHIPS Act, which promotes manufacturing, and the Inflation Reduction Act.

Before leaving the White House, Biden issued a statement indicating that the latest GDP data was “more proof that our economic recovery is continuing to advance.”

Biden appeared to imply that Thursday’s report on the nation’s gross domestic product demonstrated that his plan was reversing the country’s post-pandemic decline.

Biden stated, ‘For months, pessimists have argued that the U.S. economy is in a recession, and congressional Republicans have been rooting for a recession.’

In Syracuse, the president will highlight Micron’s commitment to invest $100 billion over the next two decades to construct semiconductor manufacturing facilities there.

He has been referring to Republicans with ties to Donald Trump as ‘MAGA Republicans.’

He has accused the Republican Party of wanting to reduce social programs. At a virtual fundraiser on Wednesday night, he stated, “What occurs in the next Congress during this off year will determine the long-term course of our country.”

He added, “Republicans are fiscally irresponsible.”

Syracuse is located in the district vacated by departing moderate Republican Representative John Katko. It is a crucial opportunity for Democrats to gain seats. In 2020, Biden won the district by more than 7 points.

The president will be accompanied by New York Governor Kathy Hochul, who faces a difficult re-election battle against Republican Lee Zeldin.

Less than two weeks remain until the midterm elections, and polling indicates that Republicans have the momentum to win the House, while the Senate is viewed as a toss-up.

Even if Republicans win only one chamber of Congress, they will be able to thwart Biden’s legislative program for the next two years and expose him to a barrage of congressional probes. Republican legislators have previously pledged to investigate his son Hunter’s business dealings.

Democrats are defending states and congressional districts that Joe Biden won in the 2020 election. Additionally, the GOP is keeping a wary eye on Senate elections, especially in swing areas.

The Washington Post reported that the party is investing $6.3 million in advertising in three congressional districts in New York and New Jersey that President Biden won by at least eight points.

And on Wednesday, Jill Biden was in Rhode Island campaigning for a House candidate in a district that the president won by nearly 14 points.