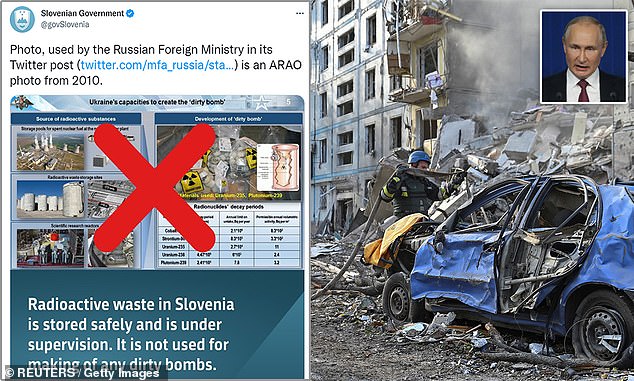 A White House official has criticized Russia for “ridiculous” deception after it released an image purporting to depict the threat of a Ukrainian “dirty bomb” that was actually an old photograph of Slovenian fire extinguishers.

As a result of Russia’s repeated warnings that the Ukrainians would detonate a “dirty bomb” in their own nation, the U.S. and its allies, as well as the Ukrainians, are closely monitoring the situation in Ukraine.

John Kirby, the national security spokesman for the White House, has cautioned that it resembles the ‘false flag’ operations for which Russia is notorious, in which the Kremlin fabricates a threat to support its own intentions.

In this instance, Russia’s foreign ministry distributed stock photographs of nuclear reactors and storage facilities to reinforce its assertions over the alleged Ukrainian dirty bomb threat.

Russia provided a photograph of dirty bomb material as “evidence” of their fraudulent allegations. Only – wait for it – the photo, taken in 2010, appears to depict a pile of Slovenian smoke alarms,’ tweeted National Security Council spokesperson Adrienne Watson on Thursday.

Russian disinformation is absurd and predictable, but it is created with horrible intent and has devastating consequences.

The assertion was based on tweets from the official Slovenian government account, which she linked to.

This source indicates that the photo used by the Russian Ministry of Foreign Affairs is a “ARAO photo dated 2010” — a reference to the Slovenian Agency for the Management of Radioactive Waste.

The director of the agency, Sandi Virsek, is quoted as saying, “Radioactive waste in Slovenia is stored carefully and is supervised.” It is not utilized in the production of dirty bombs.

The image was used as explanatory information in “professional presentations for the general and interested public.” The image depicts smoke alarms that are often used,’ the account explained.

Smoke detectors have a radioactive source, but “none of the radioactive sources” identified by Russia in a table that accompanied the image. It was utilized without the agency’s knowledge, according to the authorities.

Without offering evidence, Russia’s original tweet asserted, “According to early information at hand, two Ukrainian groups have been directly commanded to build the so-called #dirtybomb.”

The radioactive decay periods of Cobalt-60, Strontium-90, Uranium-235, and other elements were recorded in a table.

Russia invoked supposed Ukrainian threats and Nazi influence in Ukraine to justify its February invasion of the neighboring country, which it referred to as a “special military operation.”

Officials in the United States are concerned that Russia could detonate a dirty bomb, which uses a conventional explosive device to disperse nuclear material over a wide region.

When asked about the ‘dirty bomb’ threat at the White House on Wednesday, Kirby responded, ‘It is a common Russian tactic to blame others for what they are doing or about to do themselves, which is why we took it very seriously when the Russian defense minister called the Secretary of Defense and reported that they had information that the Ukrainians were planning to use a dirty bomb.’

Then he continued, ‘This is a bogus accusation. That is false. The Ukrainians have no intention of doing so. They have no such intentions. Therefore, we take it seriously,’ he explained.