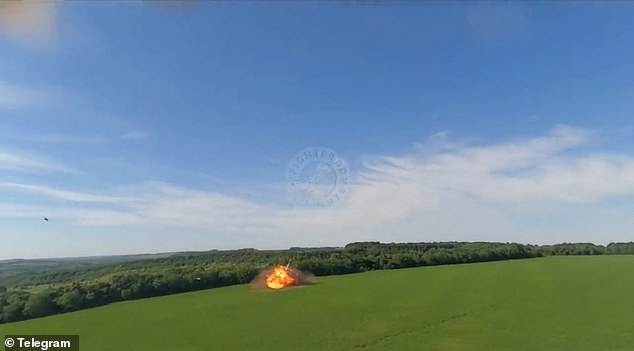 The harrowing moment a Russian fighter pilot had to get out of his flaming jet just before it crashed and detonated is seen here.

Helmet camera film that was just made available shows the pilot of a Su-25 fighter jumping out as it spirals out of control above Belgorod, Russia, in June.

One of the jet’s tail fins may have broken off when it struck a nearby power wire, sending the aircraft plummeting to the earth.

But according to those that support Ukraine, it was indeed shot down.

At the time of the accident, Russian combat bloggers had written about it and included video of the burning jet wreckage in a field.

“According to early data, the airplane struck a power line pole,” they said.

However, fresh footage that was made public for the first time on Sunday shows the accident as seen by the pilot.

The video seems to begin just after the plane was hit, maybe by an anti-aircraft missile or a power line.

As the pilot loses control, the jet starts to twist in the air before flipping over and turning sideways.

The pilot ejects halfway through the roll, catching an incredible view of his own aircraft as it disappears into the horizon.

The airplane is falling apart in pieces, and one of the engines is on fire.

There seems to be a missing portion of the rear upright tail fin. On the fuselage are “V” battle symbols, and on the side is a red “09” number.

Online observers say the aircraft is probably a Su-25SM fighter jet that was sent to Ukraine to participate in the conflict. The Su-25SM is situated in Russia’s far east.

The pilot can be seen letting up his parachute before floating back to earth as his plane crashes and explodes several hundred yards distant.

This humiliating incident involving a Russian fighter plane is just the most recent.

In a training flight near Irkutsk, in eastern Russia, on Sunday, a Su-30 aircraft nose-dived into the earth, killing both of its pilots.

These pilots have subsequently been identified as Major Viktor Kryukov, 43, and Maxim Konyushin, 50, a well-known test pilot.

Although evidence suggesting that both pilots may have passed out in the cockpit has surfaced, the precise reason of the disaster is yet unknown.

After the fateful aircraft failed to react to calls from the Irkutsk Aviation Plant and started circling on autopilot, a second plane was sent up to make contact with it.

According to reports, the aircraft circled “for a substantial while” before running out of fuel and crashing to the ground.

According to a source at the testing facility, the second plane’s crew saw the pilots “with their heads hanging down low, in other words, they both passed out.”

According to the source, severe safety violations were frequent at the facility, one of Russia’s main aircraft producers.

Given the caliber of pre- and post-flight tests, the insider remarked, “I am not at all shocked.” Although checkboxes were checked, safety precautions were not effectively implemented.

It was obvious that something was amiss with the cabin’s [air pressure] if both pilots passed out at the same time.

Another witness, who claimed to have seen it fly, refuted that claim. After taking off quickly, the aircraft started to descend like a stone.

Major Andrei Krasnoperov of the Air Force said that there may be an oxygen problem on board.

However, the specialists denied that the jet was on autopilot and had run out of fuel since its engines were still operational when it crashed, according to Readovka media.

The investigation said, “There was no effort made by the pilots to correct the flight path during the disaster, which validates the story of at least unconsciousness of the passengers on board.”

Since fighter pilots are required to wear oxygen masks the whole flight, a system failure may have been to blame for the pilot’s loss of consciousness.

They demanded that the Russian Investigation Committee’s criminal investigation look into the specifics of the accident and identify what really occurred since the material now at hand prevents drawing any firm conclusions.

It happens soon after another Russian plane, a Sukhoi 34 fighter-bomber, exploded after crashing into an apartment building in Yeysk, killing at least 13 people.

Three children were among the ten individuals inside the building who died from burn injuries, while three other people perished when they jumped from the roof to avoid being killed by the fire.

The Russian military denied that any of the casualties were due to weapons explosions and claimed the guys were participating in training when the accident occurred.

For President Putin’s struggling air force, which has already had eleven non-combat accidents since the beginning of the conflict, the crash is yet another humiliating setback.