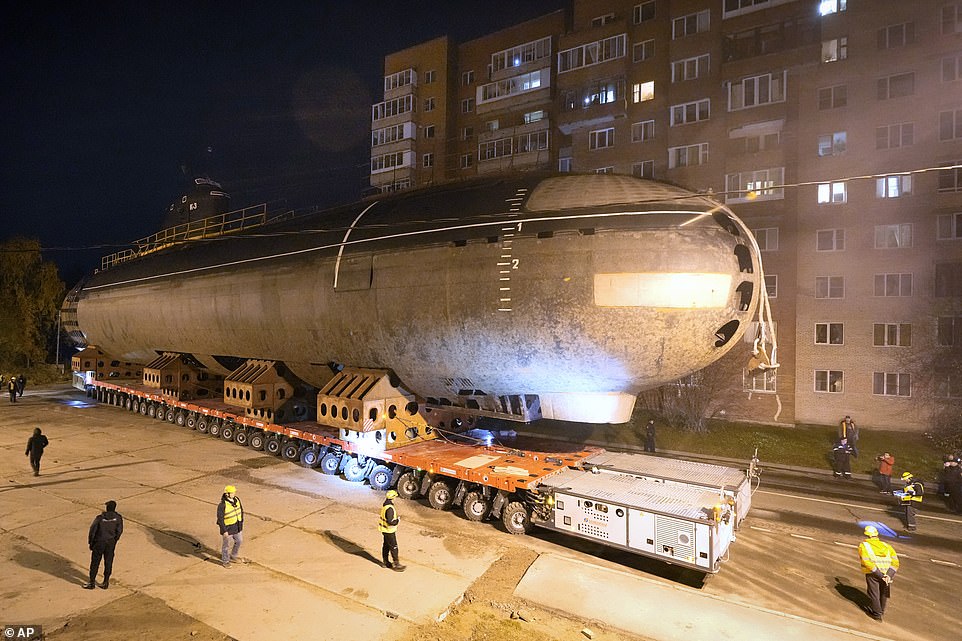 Russia has seen the parade of a 3,000 ton nuclear submarine from the height of the Soviet Union.

The first nuclear submarine ever constructed in a communist nation was the K-3 Leninsky Komsomol.

The 352-foot ship known as “The Whale” will soon house a museum in Kronstadt, a town close to St. Petersburg.

To the assembly site, where it will be on display for tourists to examine up close, it was moved across the city yesterday.

While it was in dry dock at the Nerpa shipyard, the radioactive reactors were taken out and the hull was restored.

Before being launched into the water for the first time in 1957, K-3 was created as a wooden prototype in Molotovsk.

The following year, it was sent into service as a component of the Northern Fleet of the Soviet Navy.

Four years after the USS Nautilus, the vessel made history by being the first Soviet submarine to reach the North Pole underwater in 1962.

Three years after the USS Skate, it then reappeared on the Pole.

The highest honor in the USSR, the title of Hero of the Soviet Union, was given to Captain Lev Zhiltsov for the operation.

K-3 was tasked with pursuing a US ballistic missile submarine at the height of the Cold War.

The submarine serves as a chilling reminder of how near the world came to nuclear catastrophe in the 20th century, especially in light of Putin’s brutality in Ukraine.

While traveling across the Norwegian Sea in 1967, a fire started in the hydraulic system.

Flames quickly spread to other areas of the submarine, forcing the crew to escape the compartment.

The crew trapped in the first and second compartments were smothered by carbon dioxide released by the automated extinguishers.

The third compartment’s separating door was then unlocked, allowing the gas to pour out and sending more victims into unconsciousness.

39 crew members had perished when the submarine reached base, it was discovered.

Initial investigations revealed that the fire was caused by an explosive concentration of hydraulic oil, and the crew was commended for their quick action.

Four of them—seven in total—were nominated posthumously for the Hero of the Soviet Union title.

However, a later investigation uncovered a cigarette lighter, and the placement of a sailor’s corpse indicated that smoking may have been the cause of the fire.

Then, all possible rewards were discarded.

Before being decommissioned in 1988 after 30 years of service, the submarine was repaired and put back into duty.

For restorations, it was relocated to the Nerpa shipyard in 2005, and the museum will reopen in 2016.