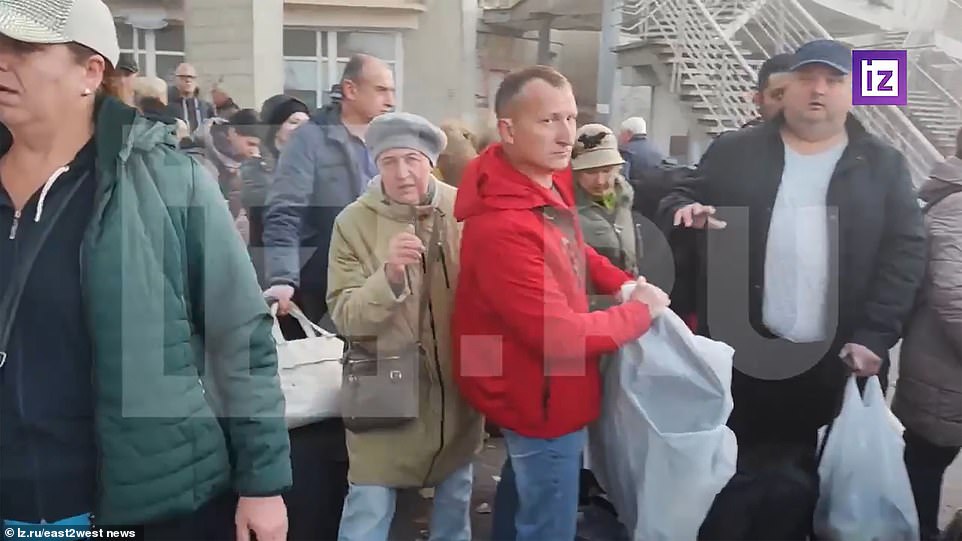 As authorities start evacuating citizens from Kherson, which seems to be about to collapse, Vladimir Putin has proclaimed martial rule in the seized parts of Ukraine.

Putin said that the law will take effect in Donetsk, Luhansk, Kherson, and Zaporizhzhia, giving him broad authority to restrict the liberties of local citizens and enlist individuals in the military.

Shortly after Sergei Surovikin, the Russian military’s new commander in Ukraine, said that the situation in Kherson is “tight” and that residents would be “resettled” in order “to preserve the lives of civilians and our service troops,” he made the announcement.

He said, “We are not excluding the most difficult choices.”

As of today, up to 60,000 people have been evacuated, according to Vladimir Saldo, the Russian officer in charge of the seized city of Kherson. This suggests that the city may fall within a week.

Saldo continued by saying that the government was also shifting and that Russia would “fight to the death” to reclaim total power. If Putin’s army is forced to retreat, this would be the most humiliating loss it has ever experienced, increasing concerns about future escalation.

Putin may be planning a nuclear show of force, perhaps including the first open-air atomic bomb explosion since the 1960s, according to rumors that UK Defense Secretary Ben Wallace was summoned to a meeting of national security officials yesterday at the Pentagon in the US.

When he said that the conversations Mr. Wallace is having are “beyond belief,” armed forces minister James Heappey did nothing to allay those worries.

Putin may launch a nuclear explosion at a secret testing site or over the Black Sea, according to experts, to demonstrate the reliability of Russia’s enormous but aging arsenal of warheads.

The fact that Russia is anticipated to conduct an annual test of its nuclear weapons in the coming days in an exercise known as “Grom,” but has not yet informed Washington when it will take place, further heightens the worry.

In accordance with the treaties controlling their use, Russia is required to notify the US before conducting nuclear exercises in order to reduce the possibility that a test may be mistaken for a real launch, which could trigger a potentially disastrous retaliation. Similarly, the US is required to notify Moscow.

A US military spokesman said on Monday, “No, we have not received any kind of formal notice.”

Long-range bombers, fighters, and refueling aircraft from NATO are presently conducting drills with their own nuclear forces over Belgium, the North Sea, and the UK.

The alliance said on its website last week that the exercise, which is scheduled to go through October 30, is a standard, ongoing training activity and is unrelated to any current international developments.

Putin’s security conference today is scheduled to officially address “neutralizing risks to national security in the migratory area,” but there is anticipation inside Russia that the major subject will likely be the conflict in Ukraine.

The fact that the meeting will be held remotely, raising the possibility that Putin won’t be in Moscow but rather is locked up in his nuclear bunker in the Ural Mountains, is fueling growing anxieties.

However, Foreign Secretary James Cleverly attempted to allay concerns on Wednesday by claiming Mr. Wallace was in Washington to discuss Russia’s most recent tactics in Ukraine, which include utilizing suicide drones and missiles to blow out power stations, rather than nuclear weapons.

The discussions in which Mr. Wallace participated, according to Mr. Cleverly, were “a routine and regular component of what is clearly a very aberrant and twisted environment.”

The Defense Secretary is in Washington, DC, to talk about common security challenges, particularly Ukraine, a Ministry of Defence official said. He will pay visits to key officials at the White House and his counterpart at the Pentagon.

According to a spokeswoman for Lloyd Austin, the US secretary of defense, they talked about “the continuing necessity of transatlantic and regional security cooperation in light of Russia’s offensive in Ukraine” as well as “our two countries’ continuous assistance to Ukraine.”

Prior to the introduction of new NATO equipment that would strengthen Ukraine’s air defenses against attacks on people from kamikaze drones and missiles, Mr. Wallace held emergency meetings.

Following many humiliating weeks of withdrawals on the battlefield, Russia has begun launching more missiles and drones towards Ukraine.

The employment of drones, which are thought to be Iranian-made, may indicate that Iran’s supply of “high-precision, long-range, considerably big warheads” is depleting.

According to sources in Tehran, Iran intends to deliver additional surface-to-surface missiles and drones to Russia.

Volodymyr Zelensky, the president of Ukraine, said that hospitals were being forced to use backup generators as a result of Putin’s targeting of power plants, which is illegal under the rules of armed conflict.

There is no room for discussions with Putin’s administration, according to Mr. Zelensky.

“The terrorist state will not benefit from such attacks in any way.”

It will simply reaffirm its deadly and destructive nature, for which it will undoubtedly be held accountable.

Recent attacks on energy infrastructure have left Zhytomyr, a city west of the Ukrainian capital Kyiv, without power or water, as well as in Kyiv and Dnipro.

Putin has tried cowardly drone assaults after failing to take Ukrainian villages and cities with tanks, according to Mr. Cleverly.

These are the desperate measures used by a guy who is fighting a lost battle. We sent air defense missiles as a result. He won’t be able to shake the Ukrainians or our will to stand behind them.

Additionally, NATO will provide Ukraine with a fleet of drones for information gathering.

One of the main goals of this attack campaign, according to the Ministry of Defence’s daily intelligence briefing, is to severely disrupt Ukraine’s electricity distribution system.

It said, “It is quite probable that Russia has increased its readiness to hit civilian infrastructure as a result of military failures it has experienced since August.”

Ukraine is plunged into darkness by Vladimir Putin’s campaign: One in three power plants are destroyed by missile assaults as a war-torn country prepares for winter.

James Franey for the Daily Mail from Kiev

As winter approaches, a missile and drone assault has shut down a third of the nation’s power plants in only eight days, according to President Volodymyr Zelensky.

Yesterday, more drone assaults on energy infrastructure caused areas of the capital to lose power for many hours. At least three locals perished.

1,162 towns or villages in 16 regions of Ukraine, according to officials, are now without electricity.

According to Mr. Zelensky, Vladimir Putin is “creating major blackouts” and forcing hospitals to use backup generators as a result of his targeting of power plants, which is illegal under the rules of armed conflict.

Mr. Zelensky once again ruled out the possibility of peace discussions with the dictator in the Kremlin, declaring that there was “no place left for conversations with Putin’s administration.” With such activities, he said, “the terrorist state will not alter anything for itself.”

It will simply reaffirm its deadly and destructive nature, for which it will undoubtedly be held accountable.

The primary power plant in Dnipro, Ukraine’s capital and the entryway to the Donbas industrial heartland, was also struck. And Zhytomyr, located west of Kiev and home to important industry and military stations, was left without electricity.

150,000 of the city’s 250,000 people remained without power Wednesday night, according to mayor Serhiy Sukhomlyn.

A 33-year-old computer repairman from Zhytomyr named Pavlo Raboschuk claimed to have dehydrated food, warm clothing, and batteries stored away to prepare for “a harsh and gloomy winter.” Only profanities came to mind, he continued.

Within 30 minutes after the air raid’s end, school headmistress Iryna Kolodzynska had the kids back at their desks. We must not falter, she said. There were areas where the conflict had a considerably greater impact than on us.

The deputy director of the Ukrainian president’s office, Kyrylo Tymoshenko, declared: “Our regions are interdependent, thus the situation is severe currently across the nation.” The whole nation has to be ready for power, water, and heating disruptions.

Over 70 people have died and 240 have been wounded, according to Oleksandr Khorunzhyi, a spokesperson for Ukraine’s emergency services, since Russia’s attack started last Monday.

Eight missiles were fired towards Kharkiv, the second-largest city in Ukraine, which is around 25 miles from the Russian border. One of the main goals of this attack campaign, according to the UK Ministry of Defence’s daily intelligence briefing, is to severely destroy Ukraine’s electricity distribution system.

The MoD said that Russia “has extremely likely developed a stronger readiness to hit civilian infrastructure” as a result of its recent war failures.

Speaking on the condition of anonymity, a senior Western source said that Russian missiles were running low when Iran sent kamikaze drones to Moscow.

According to the insider, “the Russians’ capacity to continue with these overwhelming barrages of precise weaponry is now reaching the point where this will be unsustainable.”

Putin, however, received applause from pro-Kremlin Telegram groups for his assault on the energy infrastructure in residential areas. Moscow denies employing drones made in Iran. According to Dmitry Peskov, Putin’s senior propagandist, “Russian technology is being deployed.”

»Putin imposes martial rule in the occupied parts of Ukraine«