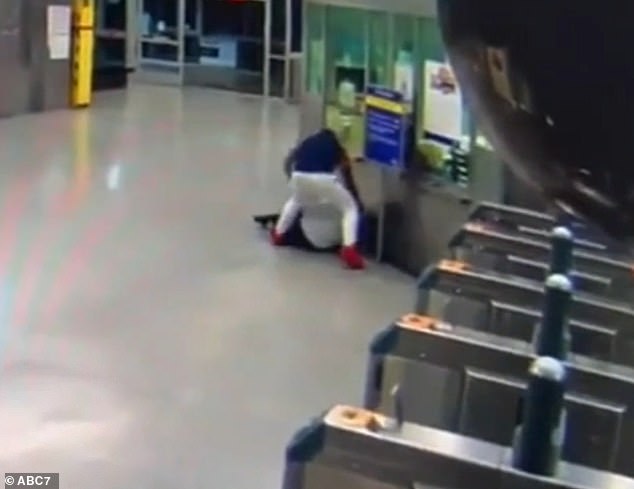 After being brutally assaulted by a homeless career criminal at the airport subway station, a security officer at JFK Airport blasted New York City Mayor Eric Adams and local officials for doing little to stem the tide of crime in the Big Apple.

In an interview with the New York Post on Tuesday, Elizabeth Gomes, 33, begged Adams to put an end to the chaos.

Our city urgently needs assistance, she remarked. We have a lot to deal with right now. I heard that there will be police officers stationed on stations, riding the trains, and down in the tunnels. Particularly on the subway, Mayor Adams added.

She asserts that her injuries are evidence that the mayor hasn’t increased the number of police officers stationed at subway stations, stating that “Obviously, the government or nobody is doing anything for us.”

After that, Gomes criticized Adams for traveling to Puerto Rico while crime in his city appeared to be unabated: “When we’re out there, we’re by ourselves, we’re fighting these battles by ourselves, and what they do, they go try to help other countries that have nothing to do with what we’re going through in our own place.”

Adams left on Saturday night for Puerto Rico to help rebuild what he dubbed the “sixth borough” of New York City after Hurricane Fiona wreaked havoc there. On Tuesday, he came back to the city.

Five children, all under the age of 13, all of whom live with their mother, who said that “my life has changed, everything changed,” added that she is “scared to even leave my home” and that she doesn’t “even want to travel the train.”

“You know, I love my work so much, and part of me, like, doesn’t want to go back because I’m terrified,” she said of her ten years of devotion to the airport.

Clement Tucker, her husband, shared Gomes’ earlier concerns that she would lose her vision in one eye.

On September 20, about 5:15 am, Gomes arrived at the Howard Beach station in Queens, New York City.

When she refused Waheed Foster’s attempt to strike up a conversation, the 41-year-old threw himself at her, pulling her to the ground before kicking and hitting her.

Foster, who was detained for brutally beating his 82-year-old foster grandmother to death when he was 14 years old, pounded Gomes while she cowered on the ground.

One guy attempted to help Gomes, but Foster chased him away before resuming her attacks.

He then turned and left, leaving Gomes lying there. Soon later, the vagabond was taken into custody.

Later it was discovered that he had been detained for stabbing his 21-year-old sister with a screwdriver six years after the murder.

He was detained in 2010 after assaulting three staff members at the Creedmore Psychiatric Center, where he was a patient.

According to ABC News, at the time of the assault last week, he was out on parole until November 2024.

Do you realize how terrified I am right now? Gomes said to the network on Monday, “I was never the kind of guy to be afraid.

I honestly can’t see anything on my right side. It just aches.

Every day there is a metro incident, she said. What happened to all of the police officers they claimed to have waiting to protect us? There seems to be no one around. I don’t comprehend.

She said that when Foster assaulted her, he was making references to Satan.

He is referring to the devil. Gomes said, “He’s talking about a lot of crap.

He is facing allegations in two further criminal instances for alleged criminal mischief and small theft.

According to the most recent NYPD figures, transit crime has increased by more than 43% so far this year compared to the same time in 2021.