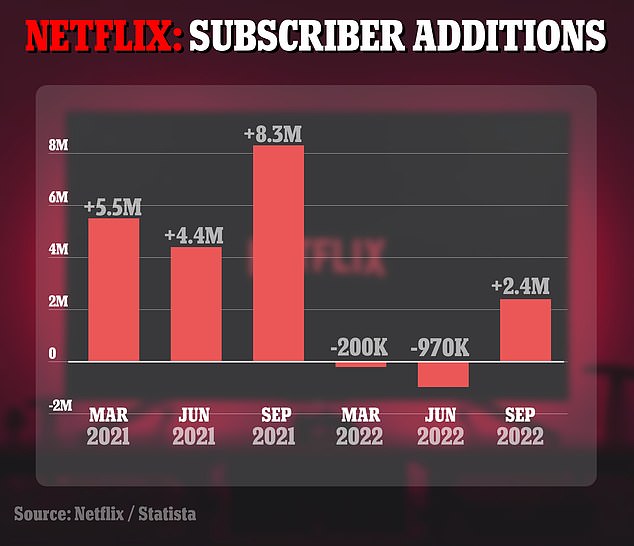 As it considers imposing additional fees for account sharing, Netflix is initiating a crackdown on freeloaders.

The dominant streaming service made a suggestion that it may charge users extra for creating new accounts.

During its quarterly results call on Tuesday, the company said that it will start to “monetize account sharing” in the coming months.

The action seems to be a last-ditch effort to discourage customers from sharing their passwords and account information with friends and relatives rather than paying for their own membership.

Earlier this year, Netflix tested the method in South America, charging account members an additional $3–$4 per second household. However, a representative said that it has chosen to “sunset” the notion.

It happens after the massive streaming company saw a glimpse of optimism for the future yesterday when it reclaimed 2.4 million customers and witnessed a 13% increase in share price.

However, as equities are still down by more than 50% from the year’s beginning, it simply represented the beginning of the comeback.

In the “who’s watching” box that appears when you initially log on, Netflix announced it may charge a fee for account sharing during its quarterly earnings call on Tuesday.

According to the New York Post, the proposal was initially made in April after a dismal financial report. It comes after Netflix looked for strategies to prevent customers from sharing accounts without driving them away from the service.

According to Netflix, the novel solution to the long-standing issue of account sharing is “thoughtful.”

According to Netflix’s release, “We’ve settled on a deliberate method to monetize account sharing and we’ll start rolling this out more generally beginning in early 2023.”

We will provide sharers with the option to manage their devices more simply and to form sub-accounts, if they wish to pay for family or friends, after taking into account customer input.

In Latin America, where password sharing was a particularly pervasive issue, Netflix tested the notion of charging for extra accounts during the summer.

Now that the change is being widely implemented, it may make or break Netflix, which has been trying to find a solution to stabilize its declining profitability while keeping its subscription-based business model.

Netflix is doing all it can to protect customers from hacking and the sale of their data, according to analysts, but many believe it is only a matter of time until the company is compelled to do that.

Following the disclosure of its 200k subscriber loss in April, Netflix’s share price has fallen significantly since the year’s beginning. Another 970,000 people had left the site by the end of Q2.

In the past, Netflix has cited extensive password sharing by customers as one of the main reasons for its declining subscriber numbers, claiming that over 100 million households are abusing accounts that have been purchased by others.

It implies that users’ bookmarks, suggestions, and watching history are preserved when profile owners create their own Netflix accounts.

According to Netflix, the service enables account holders to quickly move their profile from the account of a person with whom they are no longer in touch, such an ex-boyfriend.

However, it also motivates Netflix users to create and pay for their own accounts rather than ‘freeloading’ off of another user’s.

The “highly sought” function is currently rolling out to all customers globally, according to Netflix, and an email will be issued to each account as soon as it becomes accessible.

Starting in November, the site will also provide an advertisement-based subscription service for $6.99 per month.

Initially, Netflix allowed for numerous profiles on a single account so that family members could all access the same material without having to open separate accounts and pay monthly fees, such as children.

The Netflix terms of service state that account users must reside in the same home, yet there was nothing to prevent the account from being utilized across several houses.

In actuality, it meant that five individuals with five different addresses might each have a profile under a single account.

This eliminates a possible source of income for Netflix and “undermines our long-term capacity to invest in and develop our service,” according to Netflix.

In the third quarter of this year, Netflix made a surprise return because to the popularity of series like Stranger Things and Dahmer.

After losing customers for two consecutive quarters, the streaming giant’s executives said on Tuesday that the platform gained 2.4 million users between July 1 and September 30. More than twice as much as what Wall Street anticipated.

With revenue of $7.9 billion, which was up 6% from the previous year, Netflix also exceeded Wall Street expectations.

After the companies’ share prices dropped by nearly 60% over the course of the year, those earnings increased to $3.10 per share.

The streaming service’s prediction that it will add another 4.5 million subscribers in the fourth quarter has helped shares rise 14 percent in after-hours trade.

Netflix, however, expects revenue to decline once again in the fourth quarter, to $7.8 billion, as a result of rising inflation.

The increases follow the release of Stranger Things’ last four seasons as well as the serial killer series Dahmer-Monster: The Jeffrey Dahmer Story, which has become one of Netflix’s all-time most popular shows.

»Netflix is cracking down on freeloaders while considering account sharing costs«