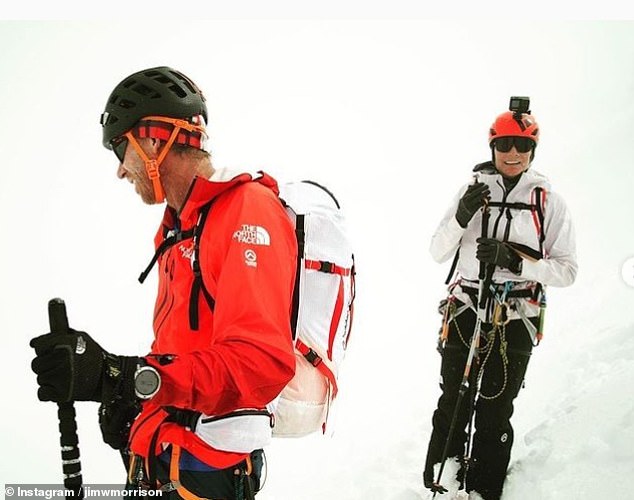 One day after she fell into a deep crevasse on the eighth-highest peak in the world, legendary US ski climber is still missing, and Nepalese rescuers have begun a frantic helicopter search for her.

Hilaree Nelson, a renowned climber and mother of two, was skiing down Mount Manaslu with her lover Jim Morrison when she vanished on Monday morning.

Morrison continued skiing down to base camp to report her missing after losing his wife and their two young children in an aircraft accident in 2011, but inclement weather initially impeded search-and-rescue attempts.

According to a friend and fellow climber, Fernanda Maciel, as soon as the weather improved on Tuesday, Morrison climbed onto a rescue aircraft to join the search effort.

A different tragedy occurred on Monday when many climbers were washed away by an avalanche on Mount Manaslu at a lower level, killing one Nepali guide and wounding others.

A decade ago, an aircraft tragedy in Barstow, California, claimed the lives of Morrison’s wife Katie, their two children Wyatt, age six, and Hannah, age five.

Katie, a certified pilot, lost control of the Cessna 210 she was piloting in bad weather while transporting her children and no other passengers, according to an inquiry.

In an interview with Sports Illustrated, Morrison discussed how he was overcome with sadness after the passing of his wife and children and how, after considering suicide, he immersed himself in climbing.

After meeting Nelson on a 2013 climbing trip to Mount Malaku, when he sobbed in a tent at base camp and related his tale of personal grief, he discovered new love with her.

The Himalaya Times was informed on Monday in Nepal by an eyewitness to Nelson’s plunge that she plummeted around 80 feet into a 2,000-foot vertical chasm. She may have survived the first fall, but that remained unknown.

A spokeswoman for The North Face said in a statement to DailyMail.com on Tuesday, “For the time being, we are able to confirm that we have received reports that Hilaree Nelson, Professional Ski Mountaineer and Team Captain for The North Face, has gone missing just below the summit of Mt Manaslu in Nepal.”

We are in contact with Hilaree’s family and are doing all we can to aid in the search and rescue operations throughout the world, she said.

Nelson, who is supported by the outdoor clothing company North Face, resides in Telluride, Colorado, with her boys Quinn, 15, and Graydon, 13. While Nelson is gone, the boys reside with his ex-husband.