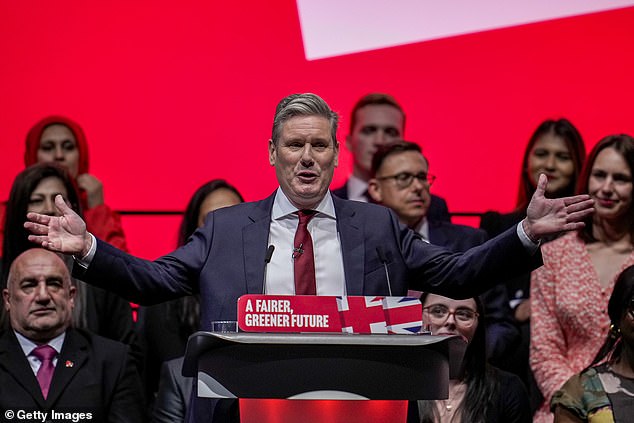 Although Sir Keir Starmer praised the deputy leader last year, he notably omitted her from the 57-minute address this time.

Instead, he mentioned Ed Miliband, Jonathan Reynolds, Rachel Reeves, the shadow chancellor, and Simon Lightwood, the party’s most recent Wakefield MP. On the other hand, Miss Rayner failed to mention Sir Keir when she opened the conference on Sunday.

After Sir Keir’s failed effort to demote Miss Rayner last year, there are reportedly still unresolved issues between the two. I thought [the speech] was amazing, Miss Rayner told Sky News after the address.

Sam Tarry, her partner and the shadow transport minister, was fired last month after doing an unauthorized interview on a picket line for the train workers. Miss Rayner has subsequently claimed that the leader was entirely within his rights to fire him.

And on Sunday, she looked to be at war with Sir Keir once again when she said she would roll back the income tax rate reductions, both at the top and the basic rate, only for the party leader to support the latter shortly after.

“Working with Ed Miliband and his team, we’ll make sure this energy revolution lights up all corners of the nation,” the Labour leader said in his address, praising three of his most senior shadow cabinet members.

“Invite them [companies] to push forward our new industrial strategy: a real cooperation between government, business, and trade unions,” he said. “As Jonny Reynolds stated.”

Sir Keir also made three references to the speech of the Shadow Chancellor as well as Simon Lightwood, the party’s newest MP after winning the Wakefield by-election earlier this year.

He told the audience last year that he was “determined to change this by investing in our businesses, by unleashing our creativity, and by bringing forward the new deal for working people launched by Angela” and praised Miss Rayner’s work on the employment rights package that was announced prior to the conference.

People saw in Keir today what I see in him all the time, Miss Rayner, a member of the left-wing party who served in Jeremy Corbyn’s Shadow Cabinet, said to Sky News after the speech. I thought it was excellent; the general people would appreciate it, and he is precisely what our nation needs right now.