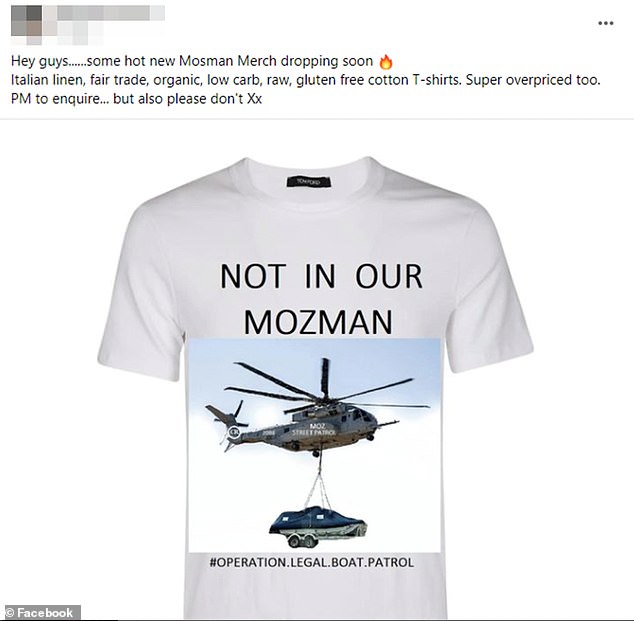 You’d be excused for believing residents of Sydney’s Mosman had nothing to complain about given the neighborhood’s gorgeous harbor vistas, multimillion dollar mansions, and almost nonexistent crime rate.

However, well-heeled neighbors in one of the wealthiest districts in Australia are at odds over the problem of boat parking after a commercial pilot parked his six-meter-long boat on the street outside a harbourside property.

Locals are divided between those who believe the pilot has the right to park anywhere he pleases, others who think it is disrespectful to leave a boat outside someone’s home, and those who choose to laugh it off.

On Saturday, the lady who lives in the opulent $5 million Mosman mansion on Sydney’s lower north shore launched a blistering assault through the neighborhood’s Facebook page, complaining that it was obstructing her view of traffic as she left her driveway and pleading with the owner to relocate it.

Locals were enraged after reading Laureen Ong’s post, with hundreds of users arguing over who was correct while others cracked jokes about the commotion in the wealthy, lush neighborhood and flooded the group with memes.

The owner, pilot Palle Lunoe, who lives two kilometers away, retaliated, claiming that the people who were alarmed “had a bit too much free time” and that his boat was lawfully docked.

Some people were so outraged by his message that they attacked him for leaving the boat in the suburban street for five days.

“Don’t have a boat if you can’t afford the mooring.” One commenter replied, “Or at the very least, dump garbage outside your own property.”

“Just because something is legal doesn’t mean it’s right,” another individual said. The neighborhood and your neighbors should be respected.

A third said, “Don’t acquire one if you can’t put your caravan or boat on your own land at a storage facility or your driveway.”

However, not everyone was in agreement; many criticized the “entitlement” of certain communities.

One user said, “Seriously, just because you’re lucky to live in one of Sydney’s priciest districts doesn’t mean you’re entitled to never ever be inconvenienced in the tiniest way.”

I don’t own a boat, but you’re Mosman’s Napoleon, someone else wrote. I support you; long live the revolution.

Others began to laugh as the argument became more and more animated. One guy described the spectacle as a “neighbourly dispute between the Have’s and the Have Yachts.”

One user said he would soon be selling items after posting a picture of a T-shirt with the words “not in our Mozman” emblazoned on the front and a picture of a huge helicopter towing away the undesirable boat.

A third jokingly said, “At this point, I’m looking forward to the 4-part ABC miniseries.”

The page was also inundated with memes and amusing images, including one member who asked the community if anybody had any insider advice on where he might park his boat by sharing a picture of his dog Captain Scruffles behind the helm of a boat wearing sunglasses.

Initially, after asking Ms Ong’s husband whether it was obstructing their driveway, Mr. Lunoe abandoned the boat and sped away when he was told that it wasn’t.

But as the days went by, Ms Ong’s irritation increased over the vessel’s interference with construction work on her home and its apparent obstruction of her view of traffic as she backed out of her driveway.

“My house is undergoing construction,” I said. With a crane, it has so far made two sizable deliveries of difficult-to-unload supplies.

Mr. Lunoe agreed to move it in the face of intense social media backlash but couldn’t help but counter with a few jabs of his own.

“This is my boat, all you angry Mosmanites,” I said. I’m glad to accept responsibility,’ he wrote.

“The boat is legally parked, and the trailer is legal.” It has every right to be parked on the road because it is a registered vehicle.

I talked to the homeowners in the house to the left. With it, they are content. As I parked the car there, the residents of the home on the right came out of the driveway but wouldn’t stop to talk.

Having said that, I’m willing to move it if it causes a problem. However, a polite request would have been sufficient.

You should read about the commotion this caused, to be honest. You people might have a bit too much free time.

According to Ms. Ong, neither she nor her husband had anticipated that Mr. Lunoe would leave his boat parked in front of their home for five days, according to Daily Mail Australia.

She said that her husband had assumed that he was just parking the car for a little period of time and that it wouldn’t remain there.

‘I think that wasn’t the case; everyone just sort of believed he was mending something or doing anything.

He didn’t specify that it would last for five days. My spouse would have said anything if he had if he had.

Ms. Ong said, “I realize everyone needs to park their boats and trailers, and people have been parking them on the street – that is acceptable.” She added that she had no quarrel with the man.

The bus stop is right there, so my main issue was getting into and out of my driveway,” she added.

They fly past, so I have to be very cautious since I can’t see while I am bringing my kids out of the driveway.

She said that after contacting the council, which was unable to assist, she made the decision to first attempt to personally locate Mr. Lunoe.

Despite the fact that she believed her response to be courteous and acceptable, she said that he seemed to be “extremely furious” and “unfriendly” with her.

She said that the only way she could have found him to ask him was via posting, but he found it disrespectful.

“I was extremely astonished by his response to us, and we made an effort to speak with him on the phone and keep things civil.” Clearly, there was a misunderstanding.

However, [the phone conversation] was just unpleasant. His words, “Your wife blew things all out of proportion,” indicated his unhappiness.

He could have parked in other spots on the street, according to Ms. Ong, that weren’t impeding any driveways.

Mr. Lunoe said that he had no beef with the homeowners and that he is confident in their “good” nature.

He said that “hundreds of individuals” had been in touch with him to give support throughout the ordeal, and council members had asked him to speak out against false information regarding permitted boat parking in the neighborhood.

Mr. Lunoe informed Daily Mail Australia that he had picked up the boat as of 5.30 pm on Wednesday.

Although registered boat trailers may lawfully be left parked in a residential street for up to 28 days, Mosman residents continue to have strong opinions on the matter.

The suburb’s typical property price is $5.3 million, and according to Australian Bureau of Statistics statistics, the average weekly family income in 2021 will be $2,892 per week. Boats are often seen in the streets around the neighborhood.

According to ATO statistics published by Canstar in August, Mosman was the sixth-richest suburb in the nation.