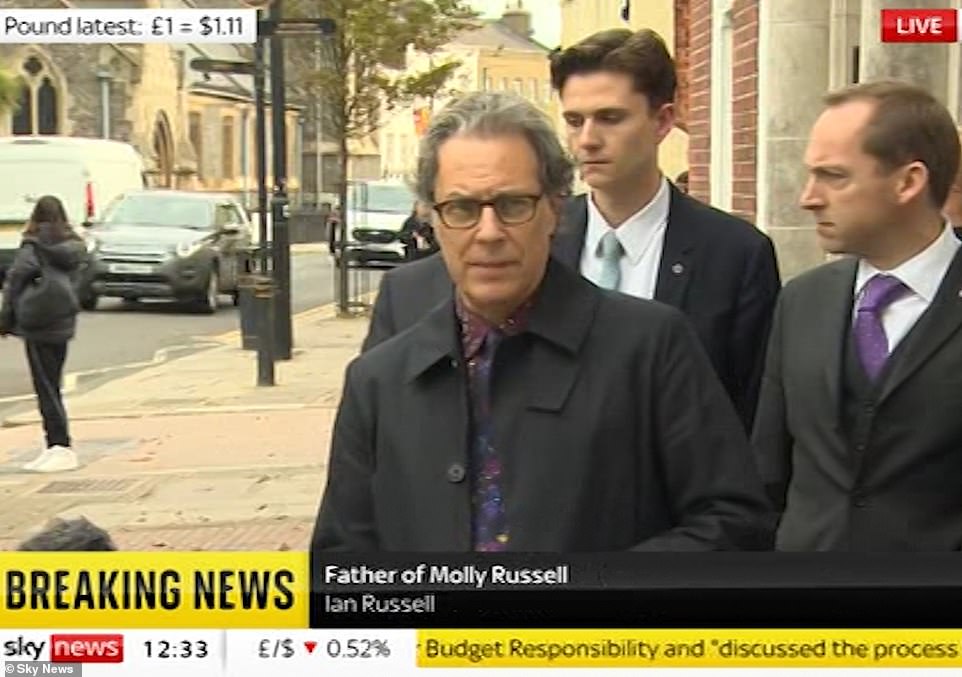 According to a coroner, Molly Russell committed herself as a result of social media messages on sadness and suicide that “shouldn’t have been accessible for a youngster to view.”

A senior coroner criticized Meta and Pinterest for permitting ‘unsafe’ information that ‘romanticized’ self-harm and fueled the 14-year-misery olds in a historic decision that may have significant repercussions for Big Tech.

The devastating discovery that Molly sought to celebrities for aid without realizing there was minimal chance of a response is just one of many heartbreaking revelations from the inquiry that created a gloomy picture of the lonely and poisoned “ghetto of the internet world.”

The schoolgirl’s desperation increased as a result of the social media algorithms sending her even more gruesome images, which caused her to have harmful “binges” and further spiral into despair.

After a coroner determined that Molly died as a result of the “bad impacts of internet postings,” Ian, Molly’s courageous father, expressed his hope that the verdict “will be a crucial step in bringing about much needed reform” outside of court today.

Sadly, there are now far too many people who are similarly impacted, he added.

“At this point, I simply want to emphasize that hope is always possible, so if you’re having trouble, I urge you to talk to a trusted friend or member of one of the world-class support groups rather than dealing with potentially dangerous internet stuff.

“Please try to live a long and healthy life. I’ll make a more thorough comment shortly, but for now I just want to thank you for your help in sensitively covering this issue. I hope this will be a significant first step in bringing about much-needed reform.

Following the completion of the inquest, Sir Peter Wanless, the chief executive of the NSPCC, blasted Meta and Pinterest for their “abject failure” to safeguard Molly and said that the verdict should “send shockwaves through Silicon Valley.”

Dame Rachel de Souza, the Children’s Commissioner, asked that social media be subject to more supervision and that they “find a moral compass and stand up.”

In 2017, Molly, a resident of Harrow in north-west London, her away as a result of keeping her “demons” hidden from her family while watching hundreds of distressing messages and videos.

In the final six months of her life, she “liked” and saved 16,300 photographs on Instagram, 2,100 of which were about sadness, self-harm, or suicide.

Senior coroner Andrew Walker stated Molly “died from an act of self-harm while suffering from despair and the detrimental impacts of internet information” and that it would not be “safe” to determine that she committed suicide.

‘At the time Molly visited these sites, some of these sites were not safe as they gave access to adult information that should not have been accessible for a 14-year-old kid to read,’ Mr. Walker concluded in a statement made today at North London Coroner’s Court.

Because of how the platforms functioned, Molly had access to photos, video clips, and text that were unpleasant or dismal in nature or that dealt with self-harm, death, or other related topics.

The site used algorithms in such a manner that it sometimes produced binge periods of photos, video clips, and text—some of which were chosen and delivered without Molly’s input.

If these binge sessions included this stuff, Molly was probably negatively impacted.

Before she passed herself in November 2017, Molly allegedly used the “ghetto of the internet,” according to her family, who said that platforms like Pinterest and Instagram had profiles or postings that “encouraged” self-harm and suicide.

Executive at Meta Elizabeth Lagone said that she thought the adolescent wasn’t at risk while seeing the messages that the Russell family claimed “encouraged” suicide.

According to Judson Hoffman of Pinterest, when Molly used the site, it was “not safe.”

2,100 of the 16,300 Instagram photos Molly saved, liked, or shared in the six months before to her death dealt with despair, self-harm, or suicide, the inquest was informed.

The coroner issued “the greatest of warnings” after 17 of the videos the adolescent saw on the website were aired in court.

The inquiry also heard information about emails that Pinterest sent to Molly with subject lines like “10 depression pins you may like” and “fresh ideas for you in depression.”

Mr. Walker went on to state the following in support of his conclusions: “Other material aimed to isolate and prevent interaction with people who may have been able to assist.”

Molly sought assistance from famous people while knowing there was little chance they would respond.

“In other instances, the material was especially explicit, tending to paint self-harm and suicide as an unavoidable result of an illness that could not be cured.

The websites “normalized” her situation by emphasizing a constrained and illogical viewpoint in the absence of any representation of normalcy.

The foregoing content was probably accessed by Molly, who was already afflicted with depression and susceptible because of her age, and it is probable that it negatively impacted her mental health and had a more than marginal role in her demise.

On Thursday, the coroner declared his intention to issue a Prevention of Future Deaths (PFD) notice, which would include recommendations for steps to take in order to avoid a recurrence of the Molly Russell case.

Oliver Sanders KC, the attorney representing the Russell family, requested that the PFD be sent to Instagram, Pinterest, the Department for Digital, Culture, Media, and Sport, and the media watchdog Ofcom.

Since Molly’s death, her family has advocated for improved internet security and stricter regulations on material that encourages suicide and self-harm.

Prior to today’s decision, Mr. Walker said that he would not be permitted to provide advice, but he did want to “raise concerns” over children’s usage of social media.

This included the absence of a barrier between users under the age of 18 and adults on the platforms and algorithms that promote hazardous information to youngsters.

Dame Rachel de Souza, the children’s commissioner, said today that social media sites like Instagram and Pinterest need to “do more and be better,” calling some of the information shown at the inquest “harrowing.”

In order to “enshrine children’s protection in legislation,” Ms. de Souza stated she wants the Online Safety Bill to be adopted.

“What the court has been hearing and what has been reported is just horrific,” the commissioner said.

We’re talking about tens of thousands of postings with the most appalling pro-suicide and self-harm [material] that we know she loved.

It’s really horrible to imagine a little girl who is sad and dejected after seeing such photographs.

“If it were just Molly and a one-off, that would be awful enough,” Ms. de Souza added, “but we know kids are seeing similar things throughout the nation, many of them underage on those social networking sites, and it’s just not good enough.” I’ve examined a lot of stuff, and it’s very, seriously worrying.

“It’s simply horrible that youngsters are seeing this material,” said a child advocate, father, and schoolteacher who has taught hundreds of students over the course of 30 years.

Ms. de Souza expressed her disapproval with Meta’s defense of some of the content Molly saw, in which a senior executive said the postings were secure since they came from individuals making a “cry for assistance.”

“I’m not shocked to hear that argument put out. It’s not appropriate to hear this from social media businesses.”

Since they are trying to improve, they aren’t going far enough, in my opinion, and I want to see these businesses develop, I find arguments like that to be morally repugnant.

Everyone has a duty in this situation, including parents and children, who are aware of when it’s appropriate for them to be online. However, the commissioner went on to say, “Frankly, tech companies have enormous power here and we need them to do more.”

They need to take down anything on suicide and self-harm. There is absolutely no justification for youngsters having access to graphic information showing self-harm and suicide, hence I believe it should be banned.

They still have since 2017, which is why I believe we need to bring back the Online Protection Bill to codify children’s safety in legislation. Self-control has just not worked well enough.

“Finally, Molly’s family has the answers they need owing to their resolve to have Meta and Pinterest questioned on oath about the role they played in their daughter and sister’s awful death,” said Sir Peter Wanless, the head of the NSPCC.

“The judgment should shock Silicon Valley; digital firms must anticipate being held accountable when they choose kid safety above business interests.” It is impossible to overstate the significance of this moment for children worldwide.

In spite of the fact that Molly’s family will always bear the burden of Meta and Pinterest’s egregious failure to shield her from inappropriate information, the Online Safety Bill offers a once-in-a-generation chance to right the balance between families and Big Tech.

According to parents throughout the UK, “This must be a turning point and any delay or watering down of the law that tackles avoidable abuse of our children would be unimaginable.”

Visit samaritans.org or dial 116 123 to reach the Samaritans for free if you need assistance.