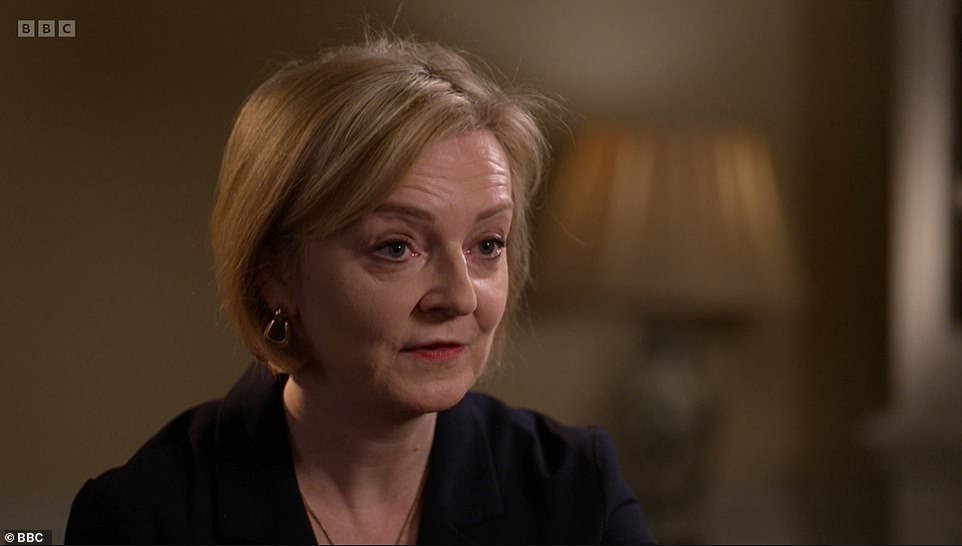 As she acknowledged that Britain was in a “very severe position” tonight, Liz Truss pledged to “get borrowing back on track” and said she is not “pretending there is no problem.”

The economy had been in chaos for about a week prior to Chancellor Kwasi Kwarteng’s tax-cutting mini-Budget, at which point the Prime Minister left No. 10 to participate in a series of BBC local radio and television interviews.

The pound has fallen to its lowest level versus the dollar in decades as a result of the turmoil on the financial markets during the last week.

In order to save millions of pensioners, the Bank of England was had to inject an estimated £45 billion into the bond market yesterday. Mortgage rates have increased while the availability of property loans has sharply decreased.

Less than three weeks into Ms Truss’s term as prime minister, a fresh YouGov survey conducted for The Times revealed that Labour had exploded to a 33-point lead over the Tories.

The poll, which was conducted today and yesterday, revealed that support for the Conservatives had decreased by seven points to 21% over the previous four days while support for Labour had increased by nine points to 54%.

Ms. Truss said that she realized it was “tough times for individuals” and that Britain was experiencing “a challenging winter” in response to a question about families concerned about the growing price of mortgages, including Tory supporters in the “Red Wall.”

The prime minister often attributed the current instability in financial markets on “global” causes like Russia’s “appalling” invasion of Ukraine in a series of interviews with the regional political editors of the BBC.

She also defended the measures she and Mr. Kwarteng have to spur British economic development, including the tax cuts announced in last week’s mini-Budget.

Without their efforts from the previous week, she said, Britain would be “facing greater prices and increased possibility of an economic recession.”

Ms. Truss pledged to “bring borrowing back on track” but was unable to estimate when her and Mr. Kwarteng’s ambitions for higher growth would be realized after making a significant expenditure to support tax cuts and freeze home and energy costs.

When asked by BBC Look North Hull whether she seemed to be asking, “What crisis?

The prime minister said, “I’m not saying that at all. I believe that things are quite serious right now.

“It’s a worldwide crisis that has been sparked by the fallout from Covid and Putin’s war in Ukraine,” said one observer.

When asked by BBC London why she chose to eliminate the bankers’ bonus cap during last week’s mini-Budget rather than assist those receiving Universal Credit, Ms. Truss responded that she “wouldn’t apologise” for wanting a flourishing financial services industry that draws foreign investment to the UK.

Ms. Truss also defended her low-tax economic plans earlier this morning when she was grilled by local BBC radio stations. She had been accused of drafting a reverse “Robin Hood Budget” that gave to the affluent at the cost of the poor.

In less than an hour, she spoke on eight local BBC radio stations, insisting that she had the “correct strategy” and would not back down from contentious decisions.

Even while there was pressure on Mr. Kwarteng and Ms. Truss to change their minds, they refused to do so when they appeared in front of the media earlier today.

The chancellor said, “Absolutely,” when asked whether he had a message for the financial markets as he was ready to visit a local company in Darlington. We will continue to follow the expansion strategy and assist customers with their energy costs. Those are my top two priorities.

When asked by broadcasters whether his tax reduction proposal had been “a massive economic catastrophe,” Mr. Kwarteng said, “What we are concentrating on is fulfilling the growth plan and ensuring that people all throughout this nation are safeguarded.”

Without growth, you won’t get public services, and we won’t be able to raise enough money via taxes and other sources to cover their costs.

Because of this, the mini-budget was crucial in resetting the conversation around growth and keeping us focused on providing significantly better results for our employees.

To reassure market-frightened investors that public finances are under control, ministers are developing measures for billions of pounds in expenditure reductions.

According to new analysis from Oxford Economics and the Tony Blair Institute for Global Change (TBI), the economy would only grow by 0.4% by 2027 compared to what it would have done without Mr. Kwarteng’s tax reduction plan.

The Chancellor was requested to come before them quickly after Parliament resumes session on October 11 in a letter from the House of Commons Treasury Committee, which is cross-party.

The Committee’s head, senior Tory MP Mel Stride, also urged that Mr. Kwarteng push up to the end of next month, if not sooner, a scheduled statement on controlling government debt and a complete projection by the Office for Budget Responsibility, both of which are due on November 23rd.

This, according to Mr. Stride, is “essential” in order to “reassure markets” and influence the Bank of England’s “important decision” over whether to raise interest rates once again at the beginning of November.

Following over a week of economic unrest caused by the “fiscal event,” the Prime Minister left No. 10 this morning to do a series of local radio interviews for the BBC.

Nevertheless, she refused to change course from her intentions to drastically slash taxes for the wealthy and raise borrowing by billions despite being shown instances of the possible suffering millions of people may face.

She also drew criticism for making it seem as if the Government’s multi-billion dollar plan to pay for energy bills will limit costs at £2,500 this winter, despite the fact that that amount is an average.

Speaking to BBC Radio Leeds, Ms. Truss stressed that while her ideas would put the nation “on a better trajectory for the long term,” things would not get better right now.

In order to keep Britain moving, our economy developing, and to combat inflation, she continued, “We had to take fast action.”

Naturally, it entails making contentious and challenging choices, but as Prime Minister, I’m willing to do that.

“This is the proper approach that we have laid forth,” she subsequently said on BBC Radio Norwich.

Additionally, she was questioned on why she hadn’t been seen in public since the mini-Budget; one caller even questioned, “Where have you been?”

“I think we have to remember what situation this country was facing,” Ms. Truss retorted. People were expected to face fuel bills of up to £6,000 this winter, extremely high rates of inflation, and sluggish economic growth.

“And what we’ve done is taken steps to ensure that consumers won’t be paying a typical fuel bill of more than £2,500 starting this weekend,” the statement said.