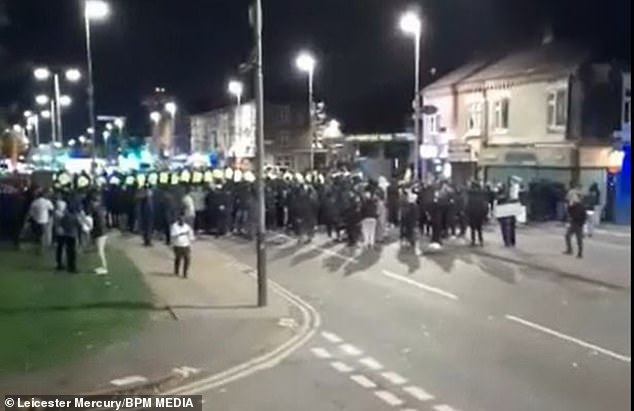 As experts express concern that global political unrest might have “ripple repercussions” in the UK, the head of Leicester Police has emphasised that his department did not endorse a rally in the city that triggered sectarian violence.

Young male Hindu and Muslim gangs battled last weekend in East Leicester, and police made 47 arrests in connection with the disruption for offences including making death threats, possessing a handgun, and affray.

The widespread unrest, which is mostly involving young males from Hindu and Muslim populations, is seen as a “country-based quarrel” after India’s victory over Pakistan in a cricket match for the Asia Cup on August 28 in Dubai.

After the game, huge groups of young men dressed in Indian flags started to celebrate on Leicester’s Melton Road. There is video that seems to show Indian fans screaming “Pakistan Murdabad,” which is a phrase from the time of the partition and means “death to Pakistan.”

Following that, tensions started to rise until they reached a breaking point on Saturday with an unscheduled protest march that is said to have attracted roughly 300 Hindu males.

Community leaders claim that disinformation spread online and outsiders travelling to the city from places like Birmingham to feed the flames were the main causes of the conflicts.

The police department is certain that they did not encourage the spontaneous demonstration on Saturday and has made it plain that they were unaware of the anticipated number of attendees.

‘On Saturday, September 17, I am making plain that police did not assist an unplanned demonstration in East Leicester,’ Temporary Chief Constable Rob Nixon said in an open letter to the locals of East Leicester.

There was no specific information on the number of individuals who planned to mobilise early on Saturday. In an effort to engage and solicit cooperation, my officers were sent to the scene.

There were eight cops there at the time, and more than 300 individuals challenged them. They stayed with them until additional cops could come, which was the most they could do given the situation. Social media videos demonstrate this.

Later, there were two arrests made.

Separately, earlier that day, police dealt with a small group that had announced on social media that they intended to travel from Birmingham to Leicester.

“Protests need prior notice, but none was provided.”

Rob Nixon, the interim chief constable of Leicestershire Police, said on a Twitter video on Saturday: “We have had multiple reports of an outbreak of disturbance in portions of the East Leicester region of the city.

“We have cops there, we are taking control of the situation, more officers are on the way, and stop search and dispersion powers have been authorised.”

“Please stay out of it. We are requesting serenity.

The incidents may serve as a warning to other UK towns and cities that local political unrest may potentially spread abroad, according to experts at the nearby Leicester universities.

Professor Neil Chakrobarti, director of the Centre for Hate Studies at Leicester University, told the Independent, “There is no doubt in my mind that the religious tensions in India and the actions of a hard-line, violent, nationalist government there has had a direct influence on what we have seen [in Leicester].”

It is impossible to picture the same tensions here if the BJP weren’t in power in India and didn’t demonise minority communities.

“And what it proves—what we need to acknowledge—is that what happens thousands of miles abroad, over continents and countries, will have an impact here at home, not just in Leicester but anywhere where various populations coexist.” Locality is global. Global events will reveal and deepen local conflicts in a linked world.

Kim Sadique, an assistant professor of community and criminal justice at the city’s De Montfort University, echoed his remarks and cautioned people to be mindful of violence leaking into the UK from other areas of the globe.

An emergency worker was attacked after the cricket match on August 28 in Leicester, which was presumably sparked by false information on social media.

Police said that competing young gangs from towns and cities including Birmingham and Luton converged on Leicester, some of them motivated by an internet campaign called “We’re going to land in Lesta [sic],” which police claim increased the violence.

Despite the fact that the tensions were brought to the public’s attention by the violence that followed the cricket match, those trying to calm the situation claim that a number of complex factors are at play that have led to the current unrest, which has only involved a small minority of each community rather than the silent majority.

Religious leaders have expressed concern that clashes like the one in Leicester might occur “all across the nation.”

After meeting with police and community leaders, the Home Secretary commented on the turmoil in Leicester, warning that “disorder and thuggery” will be subject to “the full force of the law.”

After the incidents on Saturday and Sunday that resulted in 47 arrests, Suella Braverman stated that her attention was on how to “restore safety and peace” to the city.

Images of males from the Hindu and Muslim communities engaged in tense altercations and stand-offs on the city’s streets have horrified Leicester residents, who pride themselves on their city’s diversity.

The Home Secretary said in a tweet on Thursday that she had met with members of the Leicestershire Police, interim Chief Constable Rob Nixon, and community leaders to discuss how to address the disturbance.

We’ll work together on this, and I’ll do all in my power to help the locals and the law enforcement. She added, “I applaud all those heroic police officers for keeping us safe. Those who bring chaos and thuggery to our streets will face the full power of the law.”

Asserting that she had also talked with West Midlands Police Chief Constable Dave Thompson, Ms. Braverman said that she would “continue to follow the issue and praise the police for their professional management.”

It follows a warning from Leicestershire Police about the dangers of false information being disseminated online to local communities.

According to reports, a “fake” message purporting to be from Leicester’s Hindu and Jain community circulated, prompting temples and leaders to denounce it in a statement.

According to independent Leicester East MP Claudia Webbe, certain social media accounts seem to be “preying on this concern” by “spreading falsehoods.”

She sent a letter to the interim chief constable of the Leicestershire Police advising caution and relaying information on instances of “incitement to hatred aiming at individuals of Muslim and Hindu faith.”

The disruption will be the subject of an independent inquiry, according to the BBC, which followed a meeting of local police, council members, and community leaders on Wednesday night.

The weekend’s events have not been repeated in the city.

There have been several pleas for restraint from various groups within the community, most notably from the Muslim Council of Britain (MCB), which said that “hate of any form has no place in our society.”

A call for “quiet throughout the city” was also made by the collective leadership of several of the most important Hindu and Jain temples.

Birmingham residents were among those held during unrest in the city’s east, according to the police department, which also said that 25 of its officers and a police dog were hurt.

The problems in Leicester have expanded internationally as well. On Tuesday, the high commissions of Pakistan and India both released statements denouncing violence against the Muslim and Hindu populations, respectively.

The MCB criticised “mob assaults on Muslims,” “targeting of Muslim communities in Leicester by far-right Hindutva organisations,” and “vandalism of houses and businesses in recent months” on Monday.

While encouraging restraint, the city’s Federation of Muslim Organizations (FMO) also urged cautious phrasing and emphasised the risks of attributing the unrest to one group or another.

Hindutva is a phrase that is “strictly tied to this fascist extreme minority,” and the FMO strongly advised against using it since “such labels might unjustly demonise an entire society.”

Constituents have been complaining about difficulty for months, according to Ms. Webbe.

She urged police to be on the lookout and described the “severe fears” of locals who were scared to leave their houses at night due to tales of violence in the city’s Belgrave neighbourhood after India’s victory over Pakistan in the Asia Cup cricket match on August 28.

Labour MP for Leicester South Jonathan Ashworth described the current issues as a “dark moment” in a city where he and the locals “rightly pride ourselves on appreciating our diversity.”

It has always been the case—as verified by my talks with members of various groups—that the great majority of Leicester’s Hindu and Muslim communities observe the law and continue to have cordial relationships.

“These qualities will get us through this tough time.”