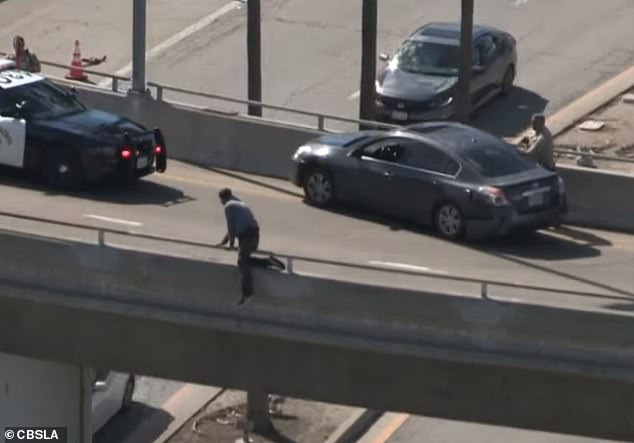 On Thursday afternoon, just outside LAX, the Los Angeles Fire Department put up an air cushion for a man who was threatening to jump after a high-speed pursuit.

According to ABC 7, a California Highway Patrol chase that started in San Diego County earlier in the day was conducted by an unidentified motorist.

The man pulled up to the airport, leaped out of his black Nissan automobile, and dashed toward the edge of the bridge next to LAX.

Before the air cushion was put up, LAPD officers engaged in a standoff with the individual who was perched on the bridge for more than an hour.

Heavy traffic was seen outside of the area where the road was stopped due to the standoff in helicopter video from ABC 7.

According to early accounts, the individual could have been carrying a firearm.

CHP authorities said that the chase in San Diego started when officers sought to stop the man for cutting off oncoming traffic head-on.

Instead of stopping, he sped off, traveling at a rate of up to 90 mph.

Fortunately, there was little traffic on the freeways when the chase started in the Southern California county at noon.

Before reaching Los Angeles, the man traveled all the way up Interstate 5 in the direction of the north, passing through the counties of San Diego and Orange.

Just about 70 miles separate the northernmost tip of San Diego County from the Los Angeles airport.

He soon exited the freeways that were in transition and raced through Compton and Inglewood, both of which were east of the airport.

The man was seen constantly putting his head out of the window of his Nissan to look behind him for law officers.

He arrived at the airport at 1:00 p.m., according to ABC7, and dashed to the edge of the bridge while police waited behind the doors of their patrol cars.

The standoff caused delays in traffic between Century Boulevard and northbound Sepulveda Boulevard, according to authorities.

Officers on the bridge were standing only a few feet away from the individual, who was shown on helicopter video sitting on the highway ledge barrier as of 2:30 p.m. Pacific Standard Time.

There is now police action close to the LAX entrance. The airport’s account stated that although Westbound Century Blvd. to the departures level is open, Southbound Sepulveda remains the preferred access route.

“Flights are not disrupted, but traffic is expected to be busy and backed up.” Give yourself more time, LAX said.

One man replied, describing the backup as “massive,” and suggesting a another method.