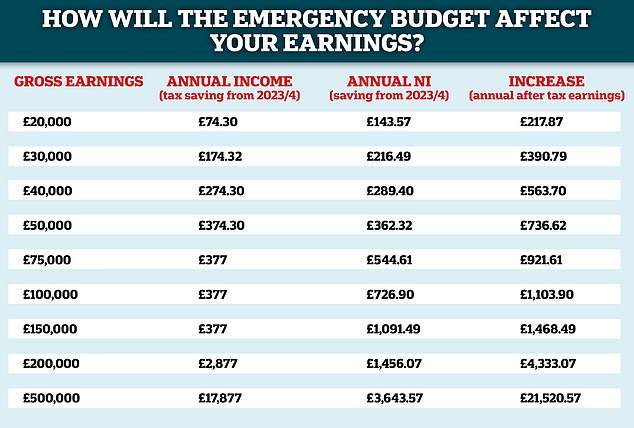 According to Kwasi Kwarteng’s announcement made today, a reduction in income tax is expected to benefit more than 30 million taxpayers next year.

The basic income tax rate will decrease by 1p starting in April according to the Chancellor’s “emergency budget” this morning.

It indicates that the base rate will now be reduced from 20% to 19% a year sooner than originally anticipated.

According to the Treasury, the 1p reduction would benefit 31 million taxpayers next year, with an average gain of £170.

Additionally, Mr. Kwarteng made a stunning announcement that he would eliminate the 45p tax rate, which is now paid by anyone who make above £150,000 annually.

As a result of the removal of the extra rate in April, all taxable income above £50,270 will now be subject to the existing higher rate of tax, which is 40%.

The Treasury calculated that the extra rate’s elimination would benefit around 660,000 persons the following year.

In addition to lowering income taxes, the chancellor said today that he is also cancelling the increase in National Insurance payments to benefit workers even more.

Former Chancellor Rishi Sunak proposed the 1.25 percentage point increase in April. But starting on November 6th, it will be reversed.

In addition, Mr. Kwarteng is scrapping the Health and Social Care Levy, a separate tax that was set to replace this year’s National Insurance increase in April.

According to the Treasury, 28 million individuals in the UK would profit from this, saving an average of around £135.

Although the Chancellor today pledged to keep spending for the NHS and social care at the same level as anticipated, the tax was anticipated to collect around £13 billion annually.

In an effort to “unlock the huge potential of our nation,” Mr. Kwarteng and Ms. Truss explained to the House of Commons that their tax proposals were a part of a “new strategy for a new age.”

According to him, Britain will now have “one of the most competitive and pro-growth income tax regimes in the world” as a result of the cutbacks.

The Scottish Government sets the income tax rates, thus the modifications will have no effect on them.

The difference between what is paid north of the border and south of it will grow as a result.

She said that Mr. Kwarteng’s “reckless” conduct would favour the wealthy over those with lower and moderate incomes, “tank” the pound, and increase borrowing costs.

»Kwasi Kwarteng states that 30 million taxpayers would gain next year«