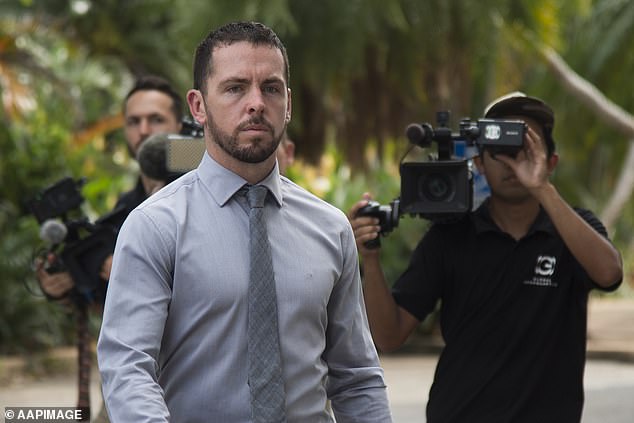 An inquest into the tragedy has once again been overshadowed by disturbing text messages that a police officer in the Northern Territory sent before killing an Indigenous adolescent.

On November 9, 2019, Kumanjayi Walker, 19, lost his life after being shot three times by Constable Zachary Rolfe during an attempted arrest in Yuendumu, northwest of Alice Springs.

Despite claims that he used excessive force after Mr. Walker attacked him, the officer was cleared of killing Mr. Walker during a trial in March.

Const. Rolfe wrote and received a number of texts in the months leading up to the shooting that called Aboriginal people “bush c**ns,” “n***ers,” and “grubby f***s,” the Alice Springs inquest into the killing of the Warlpiri man heard on Monday.

In one communication, Const. Rolfe discussed the arrest of an offender during which a colleague reportedly “lost his s***” and added, “I’m always ready to make my (body worn) camera face the other way.”

Assistant Commissioner Travis Wurst called the texts and the usage of language like “bush c**ns” “disgusting” when questioned about them.

It’s improper, I say. This language is not that of (the Northern Territory Police Force). It’s not our community’s language. He informed the coroner that it was not representative of who they were.

“That language undercuts the meaning of wearing this uniform and the culture of being a police officer in this organization.”

Mr. Wurst said he was not aware of the cops’ use of the racial slurs and suggested an investigation.

He said that his goal was “to get to the core of where that language originates from and why it’s even being used.”

Because it may be about the person, it could be about their own personal prejudices, or it could be a response to anything they’ve been exposed to, it would have been the most appropriate course of action for handling that.

He disagreed with the idea that the police may have been “letting off steam,” and he acknowledged that it may result in the dehumanization of Indigenous people.

“It’s a sign of someone’s personal prejudices towards a cultural group that might affect their ability to conduct their work,” he added.

You cannot allow such terminology to creep into the workplace or in a private situation because this is a task that we must carry out objectively, without regard for reward or punishment.

Tuesday is the next day of the inquiry.