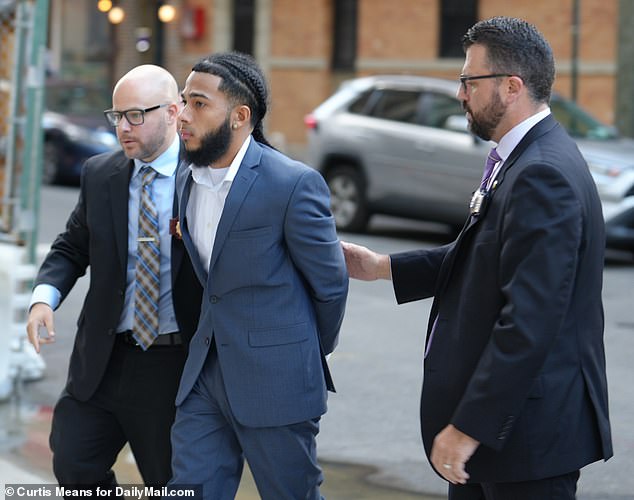 On Monday, the perp who served as the previous face of New York City’s lenient bail reforms entered and exited the NYPD’s residence in Midtown North Station.

His arrest in The Bronx on September 26 resulted in charges of attempted murder, attempted assault, criminal possession of a weapon, and reckless endangerment. He was brought into jail the next day.

Before being escorted to court, he was detained in the station for around an hour.

He became the face of the city’s bail reform in 2017 when, at the age of 17, he was sent to Rikers after rejecting a plea agreement for the killing of a 15-year-old kid in a Bronx bodega in 2015.

As he was led inside the station, Hernandez, who was dressed in a blue suit and a white shirt, showed no emotion. When reporters tried to interrogate the suspect, he remained mute.

According to The New York Post, Hernandez was apprehended by police after discussions in which he expected to surrender himself to authorities failed.

Hernandez is said to have lost money and gold jewelry to two hustlers during a game of three-card monte, and he is said to have been irate when the hustlers refused to return the items after losing.

Hernandez is accused of firing a single shot into the driver’s side door of the men’s red Mercedes as they were leaving.

He then allegedly got into his own black BMW and chased the Mercedes to the Palace Hotel’s parking garage on Madison Avenue.

Men then placed Hernandez’s possessions inside the garage, which he grabbed before running away.

No one was hurt as a result of the gunfire, however a 29-year-old guy was critically hurt during the ensuing brawl.

The man began fleeing, and then they started following each other down the street, according to a witness who works at a neighboring hotel, who spoke to the Daily News.

Everyone on the street began fleeing. mostly travelers and a few New Yorkers.

According to the Daily News, a YouTuber who often uploads three card monte game videos online was able to capture the shooting on tape.

Two people came sprinting out, one pursuing the other, according to a second witness who spotted the group fighting outside the parking garage.

They were dragging asses as they exited the garage.

The hunted man left something on the ground, he continued. The person who was being pursued picked it up, got back in his vehicle, and sped off acting as if the whole NYPD was after him.

Hernandez is a well-known name in the criminal justice system in New York.

He would have avoided jail time under the agreement concerning the Bronx bodega incident, but he insisted on his innocence and was imprisoned for a year on a $250,000 bond while he awaited trial.

After the sum was lowered to $100,000, his situation attracted widespread attention, and the Robert F. Kennedy Human Rights Foundation ultimately decided to bail him out. When a witness in that case refused to cooperate, the charges were dismissed before his trial.

He was arrested once again in the spring of 2019 and accused with robbing a bodega that left the victim’s face slashed and needing 15 stitches. After the arrest, he was freed on a $15,000 bail.

Additionally, Hernandez is facing three open-fire allegations that date back to 2019. Hernandez was placed in a collar 15 times in a single year.

Hernandez would have been released on all five counts without bond if the city’s existing bail regulations had been followed at the time.

Hernandez and his lawyers have long maintained that the NYPD has harassed and targeted him.

Bronx Defenders lawyer Julia Deutsch said in 2019 that “Mr. Hernandez has been a target of the N.Y.P.D.” She added, “The specifics of this case will come out and the truth will triumph.”

Hernandez was then being represented by another lawyer, who claimed that the only thing preventing Hernandez from leading a moral life was the jail system.

Lawyer Alex Spiro stated, “It doesn’t seem to merit the statement I make over and over again when someone has been wrongly arrested as many times as Pedro and every case has been dropped.”

Spiro said, “If the system keeps out of Pedro’s way, he is a special youngster with a promising future.”

Hernandez is presently suing the NYPD for allegedly making a fraudulent arrest.