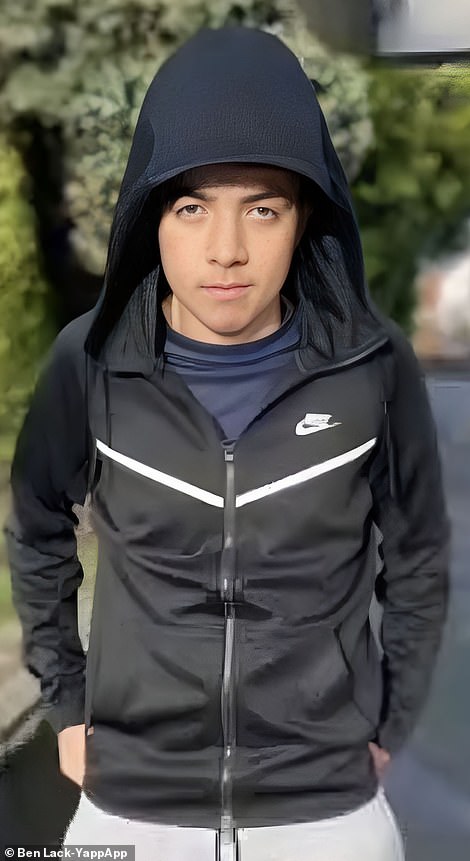 Friends of Khayri McLead, 15, who was killed in a stabbing, claim that a gang was attempting to recruit him at the same time that police had detained another teenager in connection with the attack.

A balaclava-clad assailant tied down and stabbed Khayri Mclean to death outside the school gates in Fartown, West Yorkshire, according to witnesses, amid claims from parents that their kids were encouraged to join gangs.

A 16-year-old kid has already been detained by West Yorkshire police on murder suspicion, and they are interviewing him.

The police have now reported that they have detained a second young person in relation to the horrific stabbing.

Shayana James, Mclean’s girlfriend, started a GoFundMe campaign to gather money for his family so they could give him “the finest send off.”

In the minutes after the conclusion of class on Wednesday, Shyana scoffed at the notion that he had ever “made fun of anybody” and said she “could not think of any reason he was stabbed.”

She said that when she learned that the youngster, whom she referred to as the “love of my life,” was being urgently revived by instructors, her “heart completely broke.”

Along with the victim’s upset mother Marcia, she hurried to the site and saw Khayri lying in a pool of blood on the street while his assailant ran away.

He was taken to the hospital by paramedics, but his life was lost. A 16-year-old kid was taken into custody early yesterday morning in Huddersfield’s Bradley neighbourhood, some 1.5 miles from the scene of the incident, after police opened a murder investigation.

Khayri was officially identified and the attack’s targeting was verified last night.

Shyana sobbed when she arrived back to the scene of Khayri’s death today. At the pedestrian crossing where he was killed, she broke down and said, “Every day will be like this.”

A colourful memorial with flowers, candles, and Yazoo milkshakes has been placed close to the North Huddersfield Trust school.

Shyana was among the stream of mourners who arrived at the scene this morning when a police barrier was released, but she was too disturbed to continue speaking.

‘With the heaviest of hearts, I offer my sincerest love to you all,’ said one of the cards that had been left there.

‘Marcia I’m very sorry you had to experience this suffering. Our world is a terrible place. Love to the whole family.

‘Khayri I pray for your everlasting peace. Keep Cherie xx in my thoughts and prayers.

‘Dear Khayri, you had a lovely future ahead of you but life was stealing from you at such a young age,’ read another tribute. Soar high.

After being approached and threatened with a knife after he refused to join a gang, a local mother said she removed her kid from North Huddersfield Trust.

She said that she had warned the school several times about gangs “grooming” students as they made their way to class, adding, “The school has blood on its hands.”

“This wasn’t necessary to occur.” I repeatedly notified the school that my kid was almost stabbed. I visited with them and informed them about the gangs, warning them that if they did nothing, someone would die.

The mother, 37, revealed that a youngster had been expelled the previous year after a knife was discovered in his luggage, which led to the beginning of systematic inspections.

Both Khayri and the suspect are believed to reside in neighbourhoods controlled by the renowned BBD drug gang, named after the Bradley, Brackenhall, and Deighton neighbourhoods of Huddersfield.

In 2020, sixteen members were sentenced to a combined 80 years in prison for employing 14-year-old kids as “slaves” to sell crack and heroin in Blackpool while bragging about drugs, wealth, and violence in “drill” music videos.

At 2.52 p.m., just before he was stabbed, she said she had last chatted on Snapchat to her “ideal” lover of six months.

Shyana remarked through tears, “The last thing he said was I can’t wait to see you.” He was the finest person I’ve ever known. He was the love of my life, and we were often discussing what we wanted to do when we grew up.

Shyana, who had previously attended a different institution but had met Khayri there, described her heart as being “shattered.”

Khayri’s hand was held by her mother, Sherrin James, 35, while he lay dying. Home care provider Mrs. James sobbed as she added, “His mother was here with several of the instructors.”

I joined them on the ground and held his hand; it was quite threatening. He was gripping my hand, and I was only trying to hold him together by begging him to wait for Shyana.

When asked her opinion of people who carry knives, Shyana said, “I detest it and Khayri loathed it. Here, gang activity is on the rise, and innocent individuals are falling victim to them. It is awful.”

Before Khayri was slain, two masked males were seen near the school, according to one student, Alfie Wilkinson, 12, who talked with media beside his mother.

I’ve seen him around, and he just seemed like a good kid. I didn’t understand why someone would want to do that to anyone, the man said. He believed that going to school and coming out to get stabbed were just part of a typical school day. Nobody should experience it.

The 12-year-old Ruben Duncan-Keane said that the murder had traumatised him. He said, “I saw him on the floor.”

“When one of the instructors attempted to give him chest compressions, his eyes rolled back in his head, and I knew he had passed away,” the teacher said.

The school had been “totally shocked” by Khayri’s “really unexpected” death, according to headmaster Andrew Fell.

Our sincere condolences are extended to the student’s family and friends, Mr. Fell said. We have lost a lovely kid from our school community, and they have lost a loved one.

According to a West Yorkshire Police spokeswoman, the 16-year-old is still being held. Khayri’s death, according to Detective Superintendent Marc Bowes, was a “senseless loss of a young life.”

‘We fully know the distress Wednesday’s murder has generated in communities, and I want to reassure locals that everything is being done to investigate what took place,’ said Chief Superintendent James Griffiths, district commander of Kirklees Police.