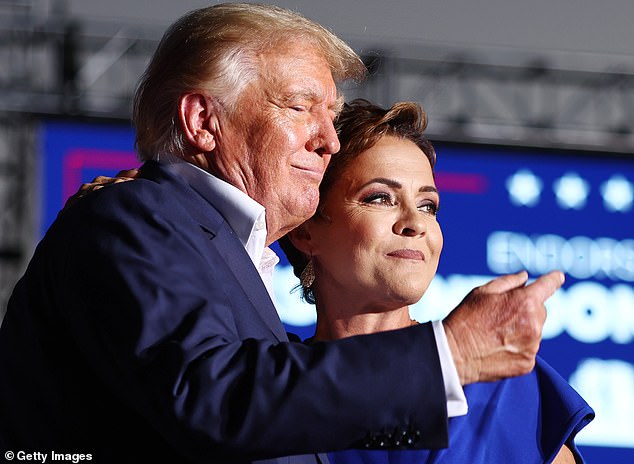 For Arizona’s vacant governor’s seat, Lake, a political neophyte and former television news anchor, is in a close contest with Katie Hobbs, the state’s Democratic secretary of state.

Lake is seen as one of the most likely to succeed in November among the ‘extreme MAGA’ candidates who are staunch friends of Donald Trump and back his unfounded allegations that President Joe Biden lost the 2020 election.

According to former senior Obama adviser David Plouffe, who told Axios that Lake appears like a “plausible presidential contender,” Democrats are wary of her as a powerful force on the national stage.

Lake, 53, a veteran TV news anchor who worked for many years, left the industry last year. She is good at making sensational assaults on reporters and the mainstream media, which turn into viral events.

According to experts, Lake’s telegenic demeanor and lack of prior experience in leadership positions are huge pluses in the present political climate in America, where outsider credentials and catchy soundbites may win the day.

That is the main difference in our politics. Both parties have a performance component to it, according to Plouffe.

In many ways, he said, “Obama and Trump expedited that trend, which is that you don’t have to wait around for 20 years establishing your case.”

“You’re a realistic presidential candidate if you’ve got something engaging to say and you can organize a campaign online,” said Plouffe.

Another former Obama adviser and strategist, David Axelrod, predicted that Lake would succeed in politics.

“It’s a powerful and dangerous mix if you have a candidate who combines the performing abilities of a large market local TV anchor with the mindset and thinking of Steve Bannon,” Axelrod told Axios.

Look at Italy,” he said, alluding to the success of the charismatic politician Giorgia Meloni, who is anticipated to succeed Mario Monti as prime minister of Italy after the recent election triumph of her right-wing Brothers of Italy party.

The election for governor of Arizona is now very close, with Lake holding a minuscule 0.9-point lead against Hobbs, far below the margin of error, according to the RCP average of recent surveys.

The Democrat Hobbs has declined to take against Lake in a debate, claiming that the Republican would make the event into a spectacle and bring shame to the state.

Hobbs’ unwillingness to engage in a discussion has been a big disadvantage, generating weeks of unfavorable press and alarmed some of her followers.

At a campaign event on Wednesday, Hobbs told reporters, “I’m not interested in being a part of Kari Lake’s show or yelling battle, and I’m going to communicate straight to the people,” while Lake supporters in chicken costumes danced outside the window.

Lake is one of the GOP candidates with the best chance of succeeding in gaining support from voters in the general election among those who won primary contests by backing Trump’s denials about the 2020 election.

Trump’s choices in other contests would seem to have little chance, making Democratic victories in potentially close contests inevitable.

Doug Mastriano, a Republican running for governor of Pennsylvania and an outspoken opponent of the results of the 2016 election, is down by 10.3 points according to the most recent RCP polling average.

Trump’s choice Geoff Diehl won the GOP primary in Massachusetts, where there is now a moderate Republican governor, but is seen to have little chance of winning the general election.

Republican primary voters in the liberal states of Connecticut and Maryland, where moderate Republicans have had some electoral success in the past, also chose Trump-backed candidates to run against Democrats in the general election.