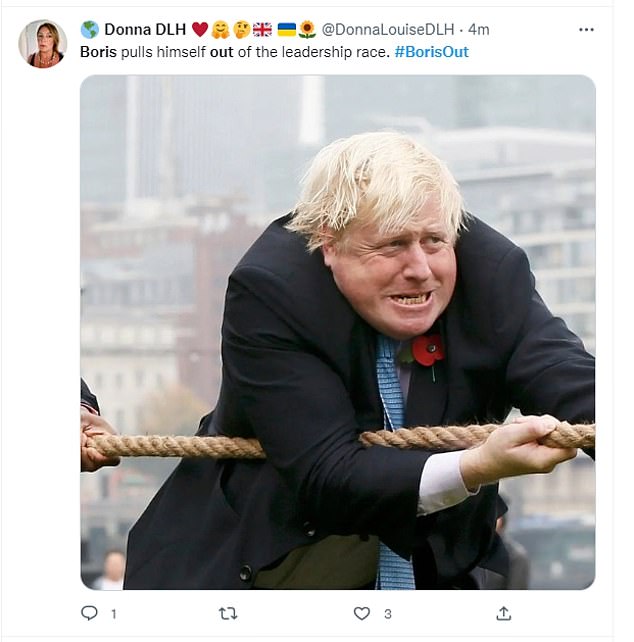 Following rumors over whether Johnson had received the required 100 nominations from other Conservative MPs, Twitter users responded to the news with laughter.

Despite assertions by the former prime minister’s supporters that he had more supporters, just 67 Parliamentarians are known to have officially supported him.

David Ronan shared a picture of Jay Cartwright, the infamous bluff in The Betweeners (played by James Buckley). Boris Johnson was quoted as saying: “Tory votes for leadership? finished it, buddy. Since I received so many votes, I felt it wasn’t fair to give the other candidates a chance.

With a dozen profile pictures of Nadine Dorries, a supporter of Boris Johnson, Shay Reaction posted a graphic of “The one hundred MPs endorsing Boris Johnson.”

Liz Truss resigned last week, and Johnson, who was fired in July after ethical issues, was generally anticipated to run in her stead.

He spent the weekend attempting to win over his colleagues’ votes, and he claimed to have reached the required number of votes—more than 100—to run.

He lagged Rishi Sunak, the previous head of the Treasury, in popularity, nevertheless. “You can’t rule successfully until you have a unified party in Parliament,” Johnson said he had come to the conclusion.

A contest was hurriedly arranged by the Conservative Party with the goal of naming a new prime minister – its third this year – by Monday.

In last summer’s Tory leadership contest to succeed Johnson after he was ousted due to a series of ethical problems, Sunak, 42, finished second behind Truss. He announced his re-entry into the most recent leadership race on Sunday.

Unofficial counts obtained by British news media show that Sunak has the support of at least 124 Conservative legislators. That exceeds the necessary 100 nominations by a significant margin.

According to a statement released by Sunak, “there will be ethics, professionalism, and responsibility at every level of the administration I lead, and I will work day in and day out to get the job done.”