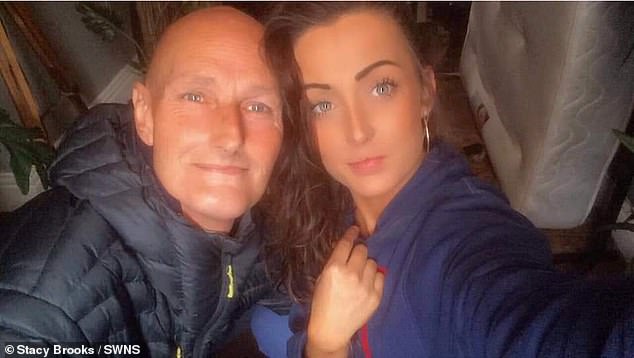 After turning to her father for assistance after a breakup left her homeless, a lady was heartbroken when he doused her in gasoline and attempted to set her ablaze.

After 20 years of separation, Stacy Brooks, 31, and Mark Brooks, 61, had only just reconciled when the attack happened.

Stacy alleges that in July 2021, when she “needed him the most,” her father moved her into his house in Pitsmoor, Sheffield, South Yorkshire, but that he soon grew “mad” about her new boyfriend, with whom she has since broken up.

Following a phone argument about her ex and money, Mark went over to the place where his daughter was living, beat her up, and then doused her with a mixture of gasoline and another flammable liquid.

On August 9, 2021, Stacy’s life was only spared when the lighter malfunctioned and her father escaped the scene.

She called 911 out of fear, and Mark was taken into custody later that day.

In addition to wanting his daughter to return home and searching for his daughter’s lover, Mark informed police that he had taken twice the recommended amount of diazepam, which had made him feel like “King Kong.”

At Sheffield Crown Court in December 2021, Mark entered a guilty plea to attempting to damage his daughter physically and to threatening to murder her.

In August, he received a jail term of nine years and six months.

In order to safeguard his daughter, he was also made the target of an indefinite restraining order.

Mother-of-four Stacy from Pitsmoor, Sheffield, said of her father: “He was a dreadful parent and had no real impact on my life.”

Until I was left with nowhere to turn after a breakup and a family member suggested I may reconnect with him, I never really really thought about him.

Since I had always secretly yearned for a father figure in my life, I reasoned, “Why not?”

We got along so well at first that I couldn’t believe how wonderful things were. Living with him was truly beautiful.

However, he quickly developed a strange obsession with me and began to dislike the fact that I had a new lover.

But I never imagined he would go as far as he did on that particular day.

I’m just so happy the lighter didn’t work because I would have caught fire in an instant.

However, he persisted because he was driven to harm me.

He most likely would have murdered me.

I now see why my mother warned me to avoid him.

Stacy’s journey started when she ended her relationship and, unsure of who to turn to, reunited with her father, who welcomed her “with open arms.”

He gave Stacy permission to live with him, and the two became close. They went out to eat, walked their dogs, and watched movies together.

That is, until Stacy, who is presently jobless, met a new partner and fell in love.

She claims that her father, Mark, had a “jealous” and “obsessive” obsession with her and even “begged” her not to move in with a new guy.

Stacy urgently sought to keep in contact with her father despite moving out and in with her new partner since she was becoming more concerned about his way of life.

But when he would only contact her “asking for money,” she got dissatisfied, and Mark became irate when she challenged him about it.

Just a few minutes away from his own place, he showed up to the houseshare she was renting and drenched her with flammable liquid.

He attempted to ignite her on fire after dousing her with what she takes to be gasoline and dousing her face, clothing, and body with it.

He would barge into my apartment, yelling and raving, the woman said.

He was calling me a “f***ing bitch,” made many threats to harm me, and declaring that I was “dead.”

It was awful hearing and seeing him like that.

He started holding me down and slammed my head into a door while dragging me around the room by my hair.

It smelled like gasoline or lighter fluid, so I immediately recognized what it was.

“I froze because I was so terrified.

He twice attempted to ignite me, but his lighter failed to ignite, and when my roommates realized what was happening, he fled, thank God.

Mark’s attorney said to the court before sentencing that his daughter had returned into his life at the beginning of 2021, and he had been worried when she started seeing a new man who had a history of domestic abuse and participation with drug selling.

Even though Stacy was pleased with the verdict at Sheffield Crown Court in August 2022, the experience had left him emotionally damaged.

She said, “He was never a nice parent, and he was never present, but I wanted to give him another opportunity.”

But how could he harm his own flesh and blood like that?

Since I am a mother, I would never injure my own children.

“If I smell gasoline, I get quite alarmed and panicky.

I’m really relieved that he has finally received some justice because he deserves it all.