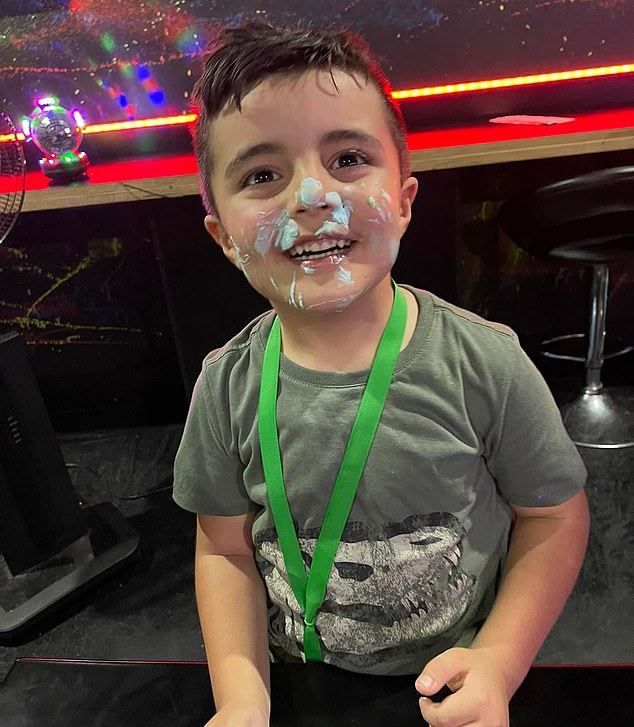 The final social media post made by a Sydney couple before their five-year-old son drowned in floodwater shows their three children playing in the back of their truck as they drive through partially flooded roads.

Joseph El Jer and Pam Hadchity shared recordings of their 445-kilometer road trip from Granville, Sydney, to Tullamore, Central New South Wales, before their vehicle was washed away by rising floodwaters about 8 p.m. on Friday.

The family had traveled west to visit the Dubbo Zoo.

The couple’s five-year-old eldest son Jayden was unable to flee the vehicle.

Joseph El Jer and Pam Hadchity (shown with their two youngest children) were discovered clinging to trees after their vehicle was carried off the road by floodwaters with their five-year-old son, Jayden, still inside.

Photos depict the family wearing life jackets being hoisted from the rescue boat.

The vehicle was held by emergency personnel while the family was rushed to Dubbo Hospital for treatment.

Jayden’s body was discovered by police divers inside the submerged vehicle, and he was transported to Parkes Hospital but could not be saved.

The day before, his parents posted a video of them traveling through partially flooded roads with their three children in the backseat.

The last video uploaded to the family’s TikTok profile shows them visiting Dubbo Zoo on Friday afternoon, around 126 kilometers east of Tullamore.

Photos depict the young youngster grinning with frosting on his face from his dinosaur-themed cake.

Jayden, age five (shown on his fifth birthday, coated in frosting from his dinosaur-themed cake), was discovered Friday night by police divers inside a submerged vehicle.

Jayden’s grieving parents released videos of the family’s automobile trip from Sydney to Tullamore before being swept away by floodwaters.

Mrs. Hadchity captioned the photographs, “You make me proud, glad, and happy, and I will always be your biggest fan, love you very much.”

Mr. El Jer wrote that Jayden was a “heavenly blessing.”

You made me a parent, something I had never imagined. Now you and your siblings have completed me,’ he declared.

On the family’s TikTok page are heartbreaking videos of Jayden playing with his brothers and dancing.

Friday night, Jayden’s parents and two younger siblings were rescued by SES personnel and sent to Dubbo Hospital (pictured, the family being lifted out of the rescue boat)

The El Jer family is well-known in the Tullamore community and frequent visitors.

According to locals, the family frequently frequented the Catholic church in Tullamore.

Local mother Adriana Stevenson told the Daily Telegraph, ‘It’s just sad, things like this just don’t happen out here, and everyone is utterly devastated for the family and everyone that went out there.’

“It is dreadful, just dreadful. You simply cannot fathom how the family must feel, as it is obviously an error, a split-second decision that has gone horribly wrong.

His father referred to Jayden as a “gift from the heavens,” while his mother said, “you make me proud, delighted, and happy, and I will always be your biggest fan. I love you so much.”

It gives you the chills.

Rob Cunneen, head commander of the SES, stated that first responders to the horrifying situation are ‘looking after each other’ amidst continuous water rescue operations.

In the past twenty-four hours, SES volunteers have responded to 112 pleas for assistance and performed six floodwater rescues.