Skip to content
Go Home «» News «» World News «» In 2023, the majority of Americans will pay less tax, but the reduction is still less than the increase in the cost of living 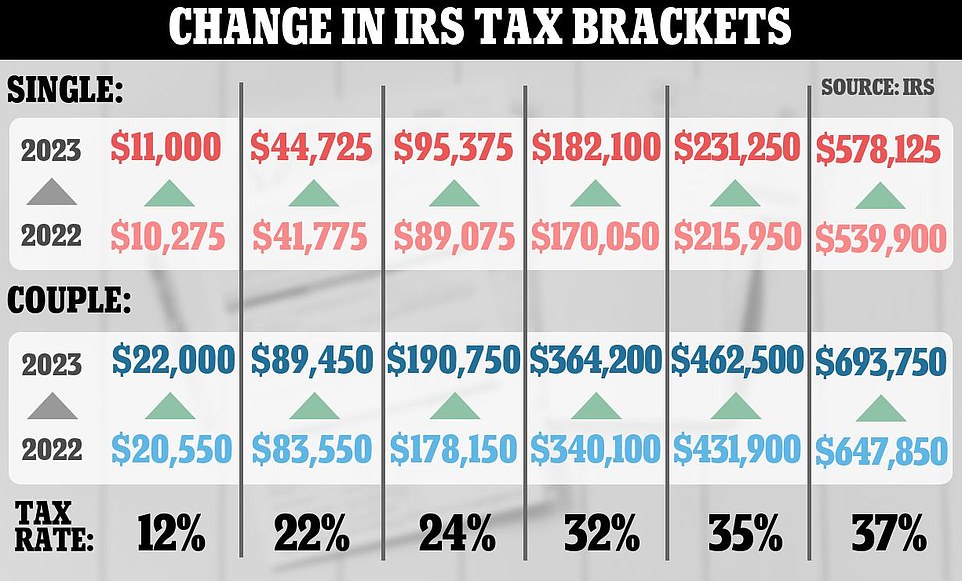 Taxpaying Americans will notice a reduction in their 2023 tax bills as a result of the IRS increasing its tax brackets by 6.7% in response to skyrocketing inflation; nevertheless, this reduction will not cover the 8.2% increase in the cost of living.

The revised tax brackets, which were revealed on Tuesday, allow Americans to file their taxes and save hundreds of dollars.

The move was triggered by inflation, although the savings will be less than in prior years due to a Trump-era modification to tax rates that ties the rate to the chained Consumer Price Index, which currently stands at 8%.

According to the New York Times, Biden is concerned that the United States could experience the same economic upheaval as the United Kingdom due to rising inflation and interest rate hikes.

For couples in the highest tax bracket, this means that roughly $46,000 of income will be taxed at a lower rate than last year, saving them $900.

The middle and working classes will also pay less in taxes, as the 24 percent rate will now apply to incomes of $95,375 for individuals and $190,750 for couples, a reduction of roughly $6,000 per person compared to previous year.

The changes are anticipated to benefit the numerous Americans whose wages have not kept pace with soaring inflation.

But the given alleviation is still less than the increase in the cost of living, which remained stubbornly at 8.2% in September.

Although those with the highest incomes will experience the greatest change, the IRS is boosting deductions across the board to further assist Americans.

The standard deduction for individuals will increase by $900 to $13,850, double for married couples filing jointly.

It is more than double the $400 deduction increase offered to individuals last year.

In addition, standard deductions for heads of households will increase by $1,400 to $20,800 this year, according to the IRS.

Those who inherit substantial wealth would be exempt from paying estate taxes on the first $12.9 million of their bequest, an increase of about $1 million from 2022.

The IRS’s action coincides with the government’s continued deployment of aid for Americans, the most recent example being the Social Security Administration’s announcement that millions of its beneficiaries will receive an 8.7 percent increase in benefits in 2023.

According to projections issued by the Social Security Administration on Thursday, the average beneficiary will get more than $140 more each month beginning in January as a result of the cost-of-living adjustment.

This will be the largest rise in benefits ever experienced by baby boomers, those born between 1946 and 1964.

Nevertheless, despite assurances of assistance, more than half of Americans have contemplated obtaining a second job to mitigate the financial burden of growing inflation.

In a poll of more than 1,000 full-time employees, Qualtrics International found that 38 percent of all workers have searched for a second job, while 14 percent intend to do so in the future.

Others have taken equally severe measures, with 18% of working people having relocated to locations with a cheaper cost of living and 13% planning to do so.

Working parents appear to be the most affected by inflation, as 70% of those surveyed report that their wage is not keeping up with expenses.

The inflation rate has stubbornly remained around 8% for months.

A separate study undertaken by the Brookings Institution estimates that raising a child from birth to age 17 will cost more than $300,000.

This represents a $26,000 increase since inflation began.

A little less than half of working parents have searched for a second job, while 43% seek higher-paying employment, and they are more likely to move to cheaper cities than workers without children.

Just prior to the midterm elections in 2022, when the deteriorating economy has become one of the primary talking issues between Democrats and Republicans competing for control of Congress, measures to combat inflation have begun.

With only three weeks remaining until the midterm elections, 90 percent of Americans are concerned about the status of the U.S. economy, and 80 percent say inflation will influence their voting decisions in November.

According to a Politico/Morning Consult poll issued on Wednesday, nearly 10 percent more respondents say they trust Republicans more than Democrats to handle inflation at the congressional level, by a margin of 46 to 37 percent.

The majority of voters in a survey conducted October 14-16 believe that Republicans in Congress are better equipped to manage topics such as jobs and the economy. In terms of the economy as a whole, 46 percent of respondents say they have faith in the GOP, while 45 percent believe Republicans are capable of handling job recovery effectively.

In the midst of an economic crisis marked by 40-year high inflation and an oncoming recession, Republicans are vying to retake control of the House and Senate. This survey is just another dismal indicator for Democrats.

53 percent of the 2,005 Americans polled are pessimistic regarding the economy’s performance over the next year.

Seventy-one percent of Republicans believe the economy would deteriorate, compared to only 33 percent of Democrats. The majority of independent voters, 56%, believe it will worsen during the next year.

For the 38th consecutive week, the majority of voters have stated that the nation is headed in the wrong path – according to the most recent survey, 70 percent of respondents hold this view.

On a generic ballot, however, the two parties continue to be fairly evenly divided. Democrats have 45 percent while Republicans have 44 percent. The poll has a margin of error of plus or minus 2 percentage points, indicating that it is still a coin toss as to which party will win the election.

Only 4% of respondents indicated that the economy and inflation would not influence their vote in the midterm elections of 2022.

»In 2023, the majority of Americans will pay less tax, but the reduction is still less than the increase in the cost of living«