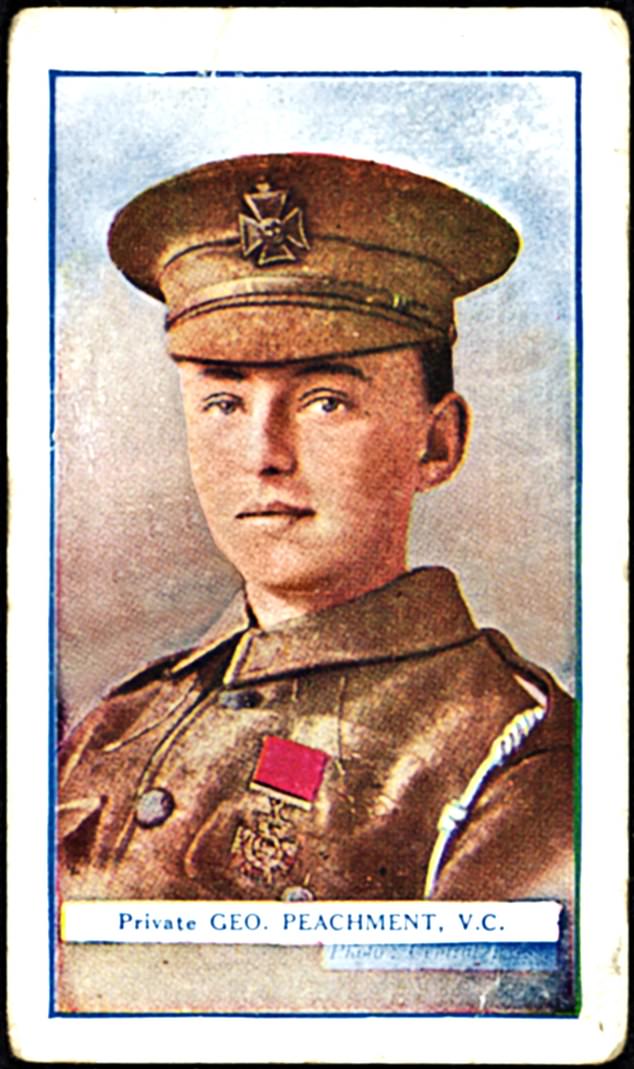 Today at 2pm, Padre Hugh Bearn will preside over a memorial ceremony honouring a valiant infantryman who passed away more than a century ago. His lengthy effort to rectify a wrong will likewise come to an end at the Bury, Lancashire, event.

A park in the neighbourhood of Tottington is being renamed in memory of Private George Peachment, who, at the age of only 18, was one of the youngest military members ever to receive the Victoria Cross, thanks to the tireless efforts of Padre Bearn and others (VC).

Additionally, a large painting in the park that shows Pte Peachment with his mother, Mary, the VC, and other nearby monuments will be formally revealed today. Finally, a display board with the regimental colours of Peachment will be erected to convey the tale of the young soldier’s heroic actions during World War One, which resulted in his loss of life.

As the author of seven books on courage and an avid collector of gallantry awards—I am the proud curator of the Peachment medals, for example—I applaud Padre Bearn’s efforts, who has fought for more than 25 years to get the valour of this young hero recognised in public.

I am also allowed to share the complete account of Peachment’s brief life and remarkable bravery today, as well as the contents of an emotional letter sent by the company commander, whose life the soldier’s teen had saved.

On May 5, 1897, Peachment, the son of a barber, was born in Fishpool, Bury. After attending three local schools, he started working as an apprentice fitter for Ashworth and Parker and afterwards for J. H. Riley, another business in Bury. He may have dropped out of school at the age of barely 12.

Peachment attempted to join shortly after the start of the First World War in August 1914, but was rejected as being too young after providing his true birthdate.

He misrepresented his age when he enrolled in the 5th King’s Royal Rifle Corps on April 19, 1915, stating that he was 19 years, one month old, while in fact he was 17 years, 11 months old. He disguised himself as older by donning his father’s bowler hat since a soldier had to be at least 19 to serve abroad.

It is important to consider the background of Peachment’s dishonesty. Many young people of that era lied about their age while enlisting out of concern that they would lose out on serving their nation in a brief world war. The majority had little to no idea of the atrocities they would experience in the trenches or the challenges they would confront while being apart from their families for extended periods of time.

In any case, Peachment’s military career did not start off well when, according to official records, he missed work from 7.30 p.m. on July 2, 1915, until 8.10 a.m. on July 5, for which he was punished seven days’ salary.

He spent three days in the barracks on September 19, 1915, when he was 18 years and 4 months old, for possessing a filthy bayonet while on parade. Six days later, on the first day of the Battle of Loos, the greatest British attack on the Western Front in 1915, he found himself right in the middle of the fighting.

On September 25, at 6.30 am, the combat officially started after a four-day artillery assault to weaken the German front line.

However, things did not go according to plan when the British opted to use poison gas. Both the 1st Battalion Loyal North Lancs and the 2nd Battalion King’s Royal Rifles were obliged to go over the top because their soldiers were choked by their own gas that had drifted back over the British lines.

The advancing British forces suffered severe casualties at the hands of two German machine guns that evaded damage in the artillery barrage. A couple of them were able to breach the enemy’s barbed-wire defences, but they were quickly killed by ferocious fire. Unsurprisingly, the onslaught failed, forcing the Tommies to hide in natural hollows and shell holes.

At 7.30 am, the few survivors started making their way back to their trenches. There was no mention of peachment. It would soon become evident that the young soldier had helped Captain G. R. Dubs, his commanding officer, who was lying wounded in a hostile area. Peachment had also lost his life as a result of this brave deed.

Dubs overcame his severe wounds, and it’s possible that his own words are the finest way to convey the narrative of the courage he saw. Dubs expressed how brave her son had been in fight and in death in a touching letter to Peachment’s mother, Mary.

I can’t express how sad I am that your heroic son died, but I hope that knowing how valiantly he acted and how he met his end may provide you some little measure of comfort.

When we got to the [barbed] wire, we saw that it had been completely spared by our artillery bombardment, making it an almost insurmountable barrier. I issued the command to attempt to go through and over it because we had to move on. Your kid followed me through the wire with me, moving ahead of me for approximately 20 yards, until we were just 15 yards from the German trench.

‘None of the other guys in the line were able to go as far, and he was the only man with me. In fact, until a bomb struck me in the eye and blew part of my face away at this point, I was unaware that your kid was with me. I stumbled to the ground, but as I got to my feet, I saw your kid kneeling next to me. At this point, the German fire was fairly severe, but your kid maintained his composure.

He asked me for my field bandage and began bandaging my head while completely disregarding the flames. Although there was a shell hole nearby where he might have taken shelter, he never considered doing so since his first impulse was to assist me. The Germans had to have seen us sitting up, and when they did, one of them dropped a bomb that struck your son in the chest while I also took a gunshot to the chest.

“Your kid was still alive, but he was not in any agony.” I was trying to hold him still while dragging him into the shell hole when a bullet struck him in the head and killed him. He was doomed to die from his first wound; in reality, he was already asleep to any agony. I stayed there with him all day till I was ultimately picked up in the late afternoon when a flank assault took the trench.

“Words cannot express how much I appreciated your son’s courage and tenacity. No one could have been braver than he was because he sacrificed his life to attempt to help me.

“I have suggested that he be awarded the VC, and I have heard that the Commanding Officer has viewed my suggestion.” If he wins, it is awful to think that he won’t be there to enjoy all the accolades, but it could be consoling to you.

“Your son demonstrated the greatest bravery a man can display, and I hope that these facts, along with the knowledge that he was spared from all pain and suffering, may help you in your sad loss.”

The London Gazette published the rifleman’s citation on November 18, 1915, and described his valour when it published Dubs’ nomination for Peachment’s VC: For extraordinary gallantry on September 25, 1915, at Hulluch.

When our front line had to retreat after intense combat in order to reorganise, Private Peachment saw his Company Commander, Captain Dubs, laying wounded and crawled to save him. Even though there was a nearby shell hole where a few troops had sought shelter from the enemy’s heavy fire, Private Peachment never considered taking cover there.

He knelt down beside his officer in the open and attempted to assist him, but while doing so, he was struck by two bombs and then fatally shot by a rifle bullet. One of the youngest soldiers in his regiment, he set a wonderful example of bravery and selflessness.

On November 29, 1916, King George V gave Peachment’s mother the posthumous VC at Buckingham Palace. He is remembered on the Loos Memorial in Dud Corner Cemetery in France, which records the names of more than 20,000 British and Commonwealth servicemen who lost their lives in the conflict but whose bodies were never found.

In 1996, 10 years after getting my first VC, I paid auction prices for Peachment’s service and bravery decorations. The awards came with a stunning letter from his company commander to his mother.

Peachment likely considered his company commander to be a father figure, in my opinion. Indeed, a lot of young troops formed deep bonds with their officers, especially with the company commanders, and this often sparked intense devotion on both sides.

Peachment wasn’t the youngest guy to get a VC in history. That distinction belongs to two 15-year-olds who won it in the 19th century for various acts of valour. He is still one of the youngest winners of the most prestigious bravery medal given in Britain and the Commonwealth, and his loyalty to his company commander was genuinely inspiring. There may have been eight VC winners during the Great War who were under the legal age limit of 18 to serve abroad.

When Padre Bearn took over as vicar of Tottington 27 years ago, he first met Stan Peachment, Peachment’s nephew, who was then terminally ill with cancer but who had told him of his uncle’s bravery. Under Stan’s mattress at the time was where Peachment’s VC was being stored. According to Padre Bearn, “I believed it was unjust that the only guy from Bury to get a VC during the First World War was not publicly recognised locally.”

Peachment Place, a nearby housing development, was eventually named in the soldier’s honour, and St Anne’s Church in Bury has a modest plaque with his name on it. To convince local officials, veterans’ organisations, dignitaries, and the general public that much more needed to be done, however, it took a quarter of a century.

I caught the bit between my teeth and wouldn’t let this go, Padre Bearn said to me. The goodness of the narrative won people over, and I’m thrilled that after the ceremony on Sunday, I’ll be able to look back and feel as if I’ve accomplished what I set out to do all those years ago—to promote the courage of this Forgotten Man.

He added: ‘I am glad to inform that a 27-year journey to garner better recognition for this brave young guy has finally come fruition. I hail from a military family and am enthusiastic about our Armed Forces, caring for our service members, and seeing to it that heroic deeds are recognised in public. To ensure that their accomplishments are always remembered, I want to shine a candle on them.

Images of Peachment and his VC citation from the Battle of Loos may now be found on a new information board in the renamed park.

I was graciously invited to today’s dedication ceremony, but regrettably I cannot make it. I have, however, agreed to submit a brief message that will be read aloud. “The bravest of the brave” is a term I like to use to characterise a select group of soldiers, and Private George Peachment VC unquestionably falls into that group. His tragic death at the young age of 18 is a shining example of bravery and selflessness.

“Greater love hath no man than this, that a man lay down his life for his friends,” the Gospel of St. John says.