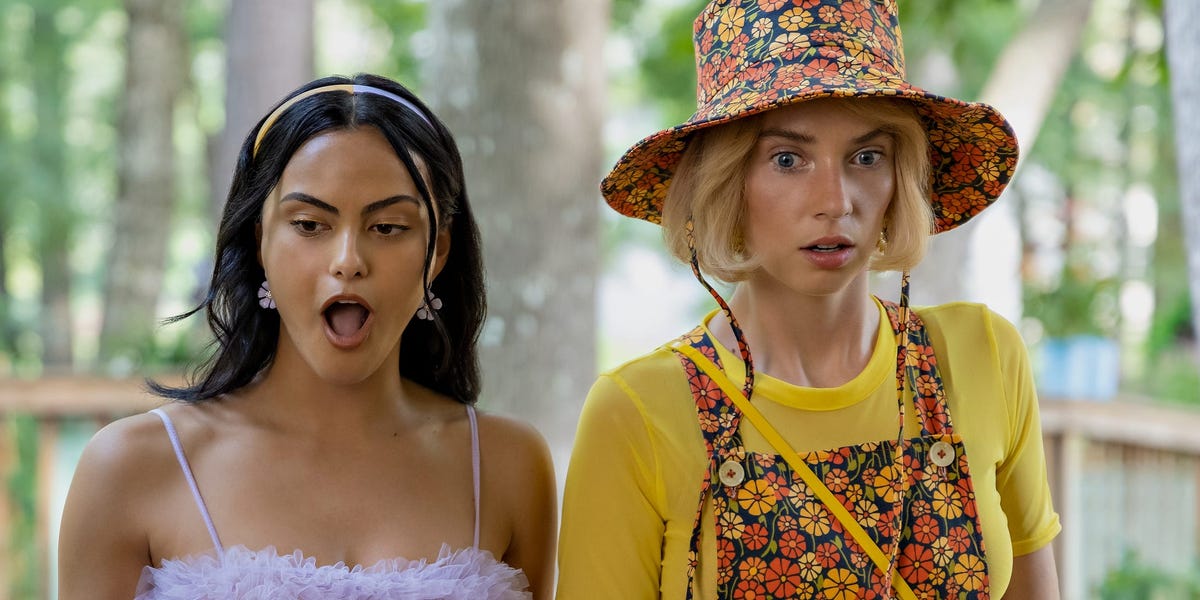 Although Drea receives punishment for punching Max, the headmistress is unconcerned about the leaked private video of her.

After Max shows the entire school a private video of her while claiming to have been hacked, Drea punches him.

The headmaster suspends Drea and requires her to perform community service but spares Max punishment because there is insufficient proof that he was the one who leaked the video.

Additionally, the headmaster makes no effort to look into the video or assist Drea in getting it removed.

Since Drea is still a minor at the time, the incident qualifies as child pornography. However, the headmaster never suggests involving the authorities and takes no action to reprimand the students who are watching and disseminating the video.

Because she believes Erica shared the video of her, Drea injects her with drugs.

Drea plants cocaine on Erica because she believes Erica shared the tennis camp video of her with the other girls.

There is no explanation for Drea’s source of cocaine, and Drea escapes punishment despite essentially ruining Erica’s life.

In the car, Eleanor and Drea both “primal scream.”

Eleanor offers to pick up Drea from tennis camp after their first encounter.

Eleanor randomly screams in frustration as she briefly explains her background, telling Drea that it’s a therapeutic “primal scream.” However, it seems a little risky to be doing it while driving.

After Drea repeatedly expresses her desire not to scream, Eleanor then insists that she do so.

Evidently, Carissa left a used DivaCup in the cafeteria of the school.

Eleanor learns more about some of their classmates’ reputations when Gabbi gives her a tour of Rosehill.

She recalls that Carissa once protested the school’s refusal to become vegan by leaving a DivaCup filled with her period blood in the cafeteria.

Particularly for someone trying to get into the culinary industry, it is very unhygienic.

While introducing his new “feminist” group, Max reminds everyone in the school of Drea’s leaked video.

Drea is asked to step up during Max’s opening-day speech, during which he reminds everyone in the school of the intimate video that was released the previous year.

There is no interruption from any faculty members at the school, and he never faces any repercussions for bringing this up.

Additionally, he simply used the event to make a questionable announcement about the formation of a “Cis Hetero Men Championing Female Identifying Students League.”

Before using the adolescent movie makeover cliche, the girls criticise it.

Eleanor objects to Drea’s suggestion to give her a makeover, which is typical of numerous adolescent movies from the 1990s and 2000s.

Drea concurs, yet they go forward with the transformation nevertheless.

The film is eager to acknowledge that there are problems with this common cliche but does nothing to change them.

Throughout the film, Drea and Eleanor refer to each other as “Revenge Mommy.”

When Drea begins to put the plans together, she addresses Eleanor as her “Revenge Mommy.”

Eleanor first gives her a strange look, but she gradually accepts this term for herself as well.

Throughout the remainder of the film, the girls refer to it affectionately.

Eleanor and Drea make a list of more gruesome requests for the headmaster.

While discussing how much they adore their headmaster, Drea and Eleanor make a list of violent things they would want him to do to them.

Eleanor begins by claiming that she wants the headmistress to run her over with her automobile.

Drea continues by asking the headmaster to have a stuffed taxidermy replica of her made so she may hang it on her wall.

Eleanor says she wants the headmaster to hide her body and then send out a search party to look for her, and the girls cut off the conversation after that.

The entire senior class is drugged by Drea.

Carissa has been growing various drugs in the school’s greenhouse, as Drea and Eleanor learn.

To get Carissa in trouble, they decide to lace the senior ring ceremony dinner that she prepared with hallucinogenic mushrooms from the garden.

Carissa is kicked out after the plan is successful. However, it implied that the senior class as a whole was drugged against their will.

Drea and Eleanor expose text messages from a number of schoolgirls, despite the fact that Drea is aware of the potential harm.

Eleanor learns that Max is dating a female from each clique at school while carrying out her part of the vengeance plan.

In order to expose him to the school, Drea and Eleanor then come up with a scheme to take his phone and release years’ worth of text messages.

When Drea’s video was leaked at the end of last year, she put several of her classmates in a situation that was very similar to her own. And because the plan didn’t work, it all ends up being for nothing.

In order to appear better, Tara and Max lie about having an open relationship.

After Drea and Eleanor reveal Max’s messages, Tara, with whom he has been cheating all along, helps him find a way to make the situation seem positive so that he can regain his popularity.

They advertise to everyone that they are in an open relationship and are not morally monogamous.

Even though the girls Max was seeing didn’t know he was seeing anyone besides Tara and would probably still be upset with him, this lie manages to get away with it.

When Drea is told Yale rejected her, the headmistress is surprisingly cruel.

Following the admissions officer’s receipt of the article outlining Max’s side of the leaked-video story, Drea is denied admission to Yale.

The headmaster claims that Drea did not participate in any extracurricular activities during her senior year and allowed her grades to suffer.

The headmistress delivers this information in an oddly cruel manner, stating that she hopes whatever diverted Drea was worth destroying her future.

It seems especially cruel that the headmistress would decline to offer to assist Drea in applying to other schools since she had previously stated that she saw potential in Drea.

To keep Rus distracted while she checks her phone, Drea impersonates an orgasm.

Drea repeatedly texts Eleanor in a rage because she can’t be reached on her birthday.

She initiates sex with Russ when he asks what she’s doing so that she can keep using her phone as he goes down on her.

Drea ignores him entirely before pretending to have an orgasm when she realises that everyone is attending a party she wants to crash.

Drea doesn’t recall circulating a rumour so vicious that Eleanor had to go to a treatment facility.

When Drea goes to confront Carissa about the previous accusations about Eleanor, Carissa reminds her that she’s the one who outed Eleanor and accused her of attempted assault.

Even though Eleanor had previously informed Drea of the whole incident, she had no recollection of it.

Eleanor was so traumatised by the experience that she was unable to eat or sleep and needed to spend time in a treatment facility.

Drea is struck by Eleanor’s automobile.

Drea refuses to assist Eleanor any longer after realising that she has been using her to manipulate others.

However, Drea caves when Eleanor threatens to poison her mother.

Eleanor nevertheless smashes Drea with her vehicle to start the next stage of her plan, despite the fact that Drea has previously committed to assist Eleanor once again.

The high students in the movie discuss about and consume a lot of drugs, in addition to Carissa’s greenhouse of marijuana and magic mushrooms and multiple sequences at parties with a lot of booze.

Elliot asks if anybody wants to do K (ketamine) with him at the admissions party at the conclusion of the movie, and Max does a line of cocaine off a girl’s stomach.

Eleanor further confesses to Drea why she has done all of this at the admissions party as her elaborate vengeance scheme begins to fall apart.

Max enters the chat and effectively mansplains everything that has transpired in the film as if that weren’t enough background information.

Drea receives a strangely phrased motivational lecture from the headmaster.

Since Max was expelled from Yale, the headmistress informs Drea that there is an opening there, and she is pleased to call to put in a good word.

The headmaster comments that Drea has changed from a cacoon to “a lovely tapestry of pain and resilience” after she declines the offer.

It’s difficult to deny that the headmaster contributed to part of that suffering by turning a blind eye to Drea’s event with the leaked film.

After all that has occurred, Eleanor and Drea remain as close as ever.

Eleanor and Drea had treated each other terribly by the time the film ends.

Eleanor’s life was destroyed by the rumour that Drea spread (and brought it back up to the popular clique at school). And Eleanor ran over Drea with her automobile, causing Yale to reject her.

At the film’s conclusion, the two still opt to stay close friends in spite of this.