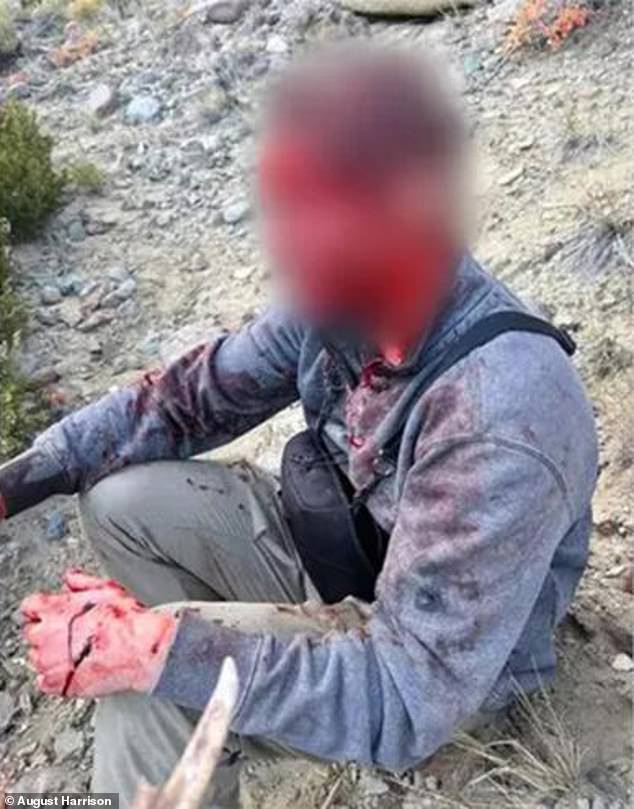 Over the weekend, a grizzly bear surprised two collegiate wrestlers who were out hunting with their friends in Wyoming and attacked them, inflicting injuries.

Following the Saturday afternoon incident that left them “blood-soaked,” the Wyoming Game and Fish Department stated in a written statement that both men were taken to nearby hospitals, one of them by helicopter.

According to the preliminary information, the agency said, “This looks to be a sudden, unexpected encounter with a grizzly bear.”

In the Shoshone National Forest south of Cody, teammates August Harrison and Orrin Jackson, Brady Lowry of Cedar City, Utah, and Kendell Cummings of Evanston were out hunting and enjoying nature when the bear charged them.

When the incident happened, the two had just discovered what they believed to be bear excrement.

According to Lowry to Fox News, “a bear came racing out of the woods right in front of me before you could even think or blink.” “It was really hammering me up.”

In the end, Lowry fractured his arm, which required six screws and bolts to fix.

He was also bitten by the bear on the right thigh. During the assault, he balled himself into a ball.

He was quickly knocked to the ground as the bear came at him.

Before he too was pursued by the grizzly and hurt before he could get his bear spray out, Cummings even grabbed the bear by the ear.

He stated, “I grabbed him and yanked him hard.”

He told Cowboy State Daily, “I could hear when his teeth would strike my head, and I could feel when he’d bite down on my bones and they’d sort of crunch.”

Cummings said, “I yelled out to Lowry to make sure he was okay, and I assume the bear heard me.” It sort of turned around and caught me once again.

Cummings remained still after the bear stopped attacking in order to avoid drawing attention to himself.

Lowry was able to dial 911 and ask his colleagues Jackson and Harrison for assistance.

Harrison said, “He was completely bathed with blood flowing down the slope everywhere.” Jackson and I took turns dragging the man to the bottom, where a field was located.

Cummings was airlifted to the hospital, while Lowry was transported by ambulance to a trauma center in Billings, Montana.

Although they will both heal, neither will be wrestling anytime soon.

Lowry remarked, “I can’t even convey how thankful I am for him.

“There are several quite significant puncture wounds.” Jim Zeigler, a wrestling coach, said that the patient had cosmetic surgery on his cheek in addition to receiving several staples in his skull. “Neither of them will be wrestling for a while,” I said.

Cummings had reconstructive surgery to repair severe facial lacerations as well as 60 staples in his skull. Along with stitches on his right hand and right leg, he suffered severe lacerations on his left arm and leg that physicians had to sew up.

Lowry had cuts to his back, shoulders, right leg, and thigh in addition to breaking his arm.

There has been a great deal of emotional pain for [Harrison and Jackson]. Zeigler said, “I don’t believe we can even begin to convey what went on there with them having to go and rescue a youngster, pull him out, and carry him out.

Officials in charge of wildlife have advised travelers to exercise care after local landowners and hunters in the area reported a recent increase in bear activity at low altitudes.

“Reports from landowners and hunters suggest there may be six to ten distinct bears traveling between agricultural fields and low elevation slopes in the area where the assault happened,” said Dan Smith, regional manager for the Wyoming Fish and Game Department.

We wish the victims of this terrible and regrettable incident a complete and quick recovery.