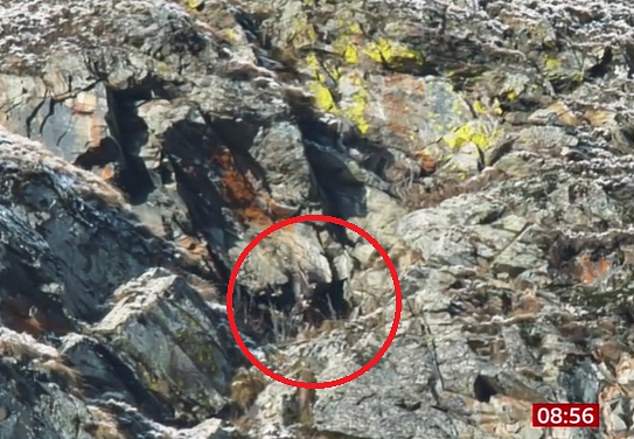 This incredible scene occurred in the Italian Alps when a golden eagle plunged its talons into a mountain goat’s throat before hoisting the struggling animal into the air and letting it fall to its death.

Even though an adult chamois goat weighs ten times as much as a golden eagle, incredible video captures the predator plunging the defenceless animal to the ground from above.

The BBC claims that this phenomenon, which is being shown in Sunday’s edition of Sir David Attenborough’s Frozen Planet II, has never previously been seen on camera.

The episode, titled Frozen Peaks, features video of a couple of eagles mating as they drag young chamois goats from the Italian cliffs, plunge them to their deaths, and then consume their corpses.

But when the summer came to a close, much to the amazement of the film team, video seen on BBC Breakfast this morning showed a golden eagle attacking an adult chamois goat.

Typically, young chamois goats and other medium-sized animals like rabbits, hares, and grouse are attacked by golden eagles.

However, footage captures the golden eagle grabbing an adult chamois goat by the neck and dragging it along the rocks along the brink of the cliff.

The goat is then successfully dragged into the air by the predator, who then drops it in midair, letting the animal fall to its death.

The mountain goat’s corpse was later observed being devoured by the two eagles.

The Frozen Planet crew reportedly had trouble believing what they had seen, according to BBC producer Alex Lanchester.

It has never been shot before, Mr. Lanchester informed The Express. We were aware that they only preyed on the calves in the spring.

“This behaviour is unusual. It’s really hefty; these goats weigh 10 times as much as an eagle.

They are enormous, and the eagles kill them by picking them up and throwing them down a cliff. It’s pretty harsh. They go on hunts in pairs.