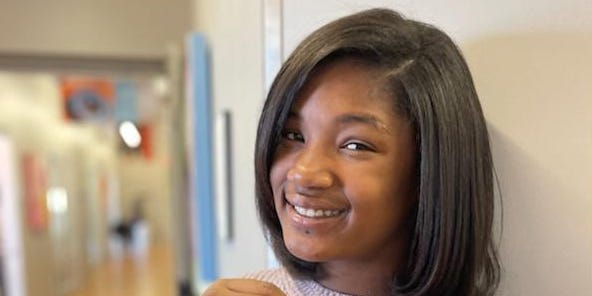 In 2020, the youngest witness to George Floyd’s death released a children’s book on her perspective and the subsequent weeks.

Judea Reynolds, age 11, published her novel “A Walk to the Store” on Floyd’s 49th birthday, which was Friday.

Floyd was assassinated on Memorial Day in 2020 by former Minneapolis police officer Derek Chauvin, who pressed his knee against Floyd’s neck for more than nine minutes.

Reynolds was nine years old when she witnessed Floyd’s killing after walking to the market with her 17-year-old cousin, Darnella Frazier, who had videotaped Chauvin and Floyd.

Reynolds was the youngest witness against Chauvin, according to ABC News.

“I was unhappy and angry because I felt like he was preventing him from breathing,” Reynolds testified, according to ABC News.

According to the book’s website, “A Walk to the Store” describes Floyd’s death from her perspective when she was nine, is illustrated by Darcy Bell-Myers, and contains worksheets with activities supplied by Aruba Emotional Health Services to assist children process traumatic events.

CNN reports that Reynolds was inspired to write a book about autism by Cameron Brundidge, whose book was written by her mother, Sheletta Brundidge.

CNN reports that Reynolds and Brundidge will co-author the children’s book.

Brundidge told CBS that this novel is about a movement. “It’s not about the pain she felt or the tragedy she through, but rather how she converted that into victory. She went walking. She walked to and from the shop on foot. She is approaching her destiny and fulfilling her purpose.”

CNN was told by Lily Coyle, owner of Beaver’s Pond Press, which published Reynolds’ book, that she struggled to find a way to present Reynolds’ experience without being harsh.

“I do not wish to publish a children’s book that harms youngsters or makes life more difficult for people. It must be a means for healing, and we seek to offer grace to this horrible situation “Coyle said to CNN:

According to the website for the book, the publisher is covering all production costs and paying Reynolds sixty percent of the revenues.

“You don’t have to be afraid of things all the time, you can be courageous and strong and fight for it, because sometimes you have to be bold and battle for things,” Reynolds told Fox 9.