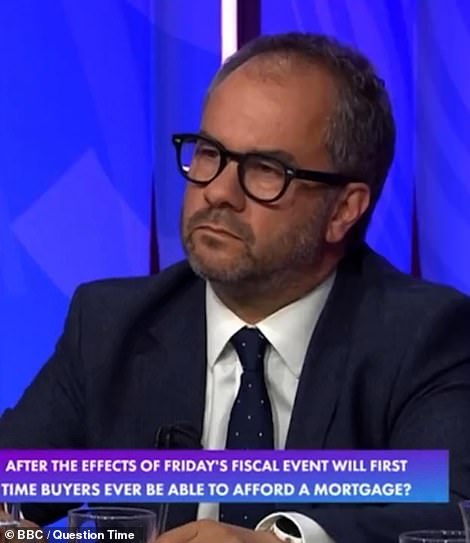 A young first-time home buyer challenged a government minister during yesterday night’s Question Time when she reported the highest offer she could find was now 10.5 percent, a hike of six percent in a week, and the market volatility caused by last week’s short budget.

The audience member informed the panel that her earlier mortgage offer of 4.5 percent had been withdrawn in response to a query about mortgages on the BBC show, which was hosted by Fiona Bruce.

Due to the lenders’ withdrawal of offers after the government’s short budget, first-time buyers are finding it difficult to finance mortgages. Since last week, at least 1,600 items have been taken off the market.

After the pound fell below 1.03 versus the dollar on Monday, the UK markets have had a volatile week.

“I want to know what the strategy is regarding mortgages,” the buyer Rabia remarked.

“My starting interest rate would be 4.5 percent,” I was informed. Today I was informed that the lender had withdrawn that offer and that the best deal I could currently receive was about 10.5 percent.

I’ve been advised that you must look into submitting your application right now since if you don’t, the lenders could even withdraw these offers.

I don’t believe I can currently afford to secure a mortgage as a first-time buyer.

Another day of the cost-of-living crisis is tense:

Fiona Bruce said: “That’s an astounding leap,” to which the rest of the crowd responded with loud gasps.

I received an initial rate around two weeks ago, Rabia said.

“We’re in the process of gathering all the paperwork, making sure it’s accurate, checking ID, and doing all of those things.”

I was informed today that the lenders are withdrawing such offers, thus they are no longer available.

A government minister named Paul Scully responded to Rabia by saying: “A representative from the UK Finance who represents lenders was speaking just yesterday and was saying there are still more mortgage products now than there were ten years ago, despite the reduction, so there’s still money around.”

But you’re correct, What you’re discovering right now… about the restrictions.

Ms. Bruce jumped in to say, “That was caused by a pandemic,” and Mr. Scully said, “It’s the uncertainty. We spent a lot of time earlier discussing how the markets are attempting to navigate this situation and figure out what’s going on.

“The confidence we aim to convey is first and foremost via much improved communication,”

Bridget Phillipson, a Labour MP and shadow minister for education, however, advised him against correcting Rabia on this point.

‘I’m trying to make sure that we calm down the financing market so that she can get a better deal,’ the minister at the Department for Levelling Up, Housing and Communities said.

I’m unable to discuss her particular situation in detail.

I am aware that I am not receiving a better deal, Rabia stated.

The small budget, she said, had had a “huge effect” on her life.

The trade took place during a tumultuous week for UK markets, during which lenders pulled their mortgage products and the Bank of England intervened urgently to stabilize the economy amid worries that pension programs may fail.

This week, the pound hit a record low, and according to estate agents, homeowners are already placing their homes on the market because they are worried that if interest rates increase, they won’t be able to pay their mortgages.

MailOnline has received letters from anxious readers who worry that their mortgage arrangements may be cancelled before they can close on their dream houses or refinance their present residences at a competitive rate.

A housing price catastrophe in Britain is imminent, according to analysts, as more than two million people deal with skyrocketing mortgage rates that will drive many of them to sell.

Mortgage anxiety is intensifying as people worry they may be unable to make increasing repayments and end up losing their houses due to projections of a 15 or even 20 percent drop in housing costs, which would knock £58,000 off the average home price.

One homeowner said, “Like hundreds of others, we’re presently purchasing a new house and our existing mortgage offer expires shortly,” in a statement to MailOnline yesterday. We may need to back out of the sale, as I imagine tens of thousands of others will as well. This is due to HSBC, our present bank, refusing to provide a new plan.

Despite the stamp duty reduction, there are concerns that the property market may stagnate because more purchasers won’t be able to demonstrate that they can make mortgage repayments if interest rates rise to 7% next year, as experts are presently projecting.

Martin Lewis, a financial analyst, warned that those leaving fixed-rate mortgages would get new offers that are up to seven times higher.

Additionally, people with variable rate mortgages, who are already feeling the squeeze, have concerns.

The pound fell sharply against the Euro and the Dollar, reaching a record low of 1.03 versus the US dollar before somewhat rebounding on Thursday.

Kwasi Kwarteng has come under fire for “undercutting the UK’s financial institutions,” according to former Bank of England governor Mark Carney, after the chancellor’s “partial budget” sent the pound tumbling this week.

According to Credit Suisse experts, a perfect storm of increasing interest rates, inflation, and the possibility of a recession may cause a decline in home values of between 10% and 15%.

According to Credit Suisse’s Andrew Garthwaite, the 8% drop in the value of the pound since August 1 could boost short-term inflation by an additional 1.3%. The typical mortgage will be 6.3% at the current exchange rates. House prices may easily drop by 10% to 15%.

It happens at the same time that the Bank of England was compelled to make a bold move on Wednesday when it said it would purchase long-term government debt in an effort to calm the market turmoil.

Yesterday, as a result of the Chancellor’s statement, the FTSE 100 dropped by 2%.

Since the unfunded tax cuts were not included in a formal budget, they were not subject to projections by the OBR. The OBR has acknowledged that it made an offer to provide early estimates last week but was turned down.

The Prime Minister is under mounting pressure to change her economic agenda, which the IMF warned would “raise inequality” and favour the rich.

In an effort to boost investment in the UK, it was announced on Friday that the highest rate of income tax will be eliminated. However, the policy has faced a lot of criticism due to claims that it is discriminatory since it primarily helps individuals who make more than £150,000 annually.

PM Yesterday, Liz Truss participated in a series of interviews with local BBC Radio stations where she was questioned on her fiscal and economic plans.

Diane, a listener on BBC Radio Tees, was informed of how the cost-of-living problem forced her to sell the home she had lived in for 25 years.

When asked how tax breaks for the wealthy would benefit individuals like Diane, the prime minister responded, “Well, we are cutting taxes across the board because we were facing the highest tax burden on Britain in 70 years and that was causing a lack of economic growth. Without growth, we don’t get the investment, we don’t get the jobs we need, which helps local communities right around the country.”

As she attends crisis discussions with the OBR about balancing the government’s finances in the wake of the market volatility, Liz Truss is standing resolute in her intentions to slash taxes.

The watchdog’s head Richard Hughes will meet with the prime minister and chancellor Kwasi Kwarteng after the absence of impartial data on the emergency budget contributed to the uproar.

While officials from the Treasury and Downing Street denied that it was an emergency meeting, Treasury minister Andrew Griffith downplayed its importance, calling it a “really nice concept.”

But as Keir Starmer leads demands to recall Parliament, which is not presently in session, over the crisis, Labour has accused the administration of hitting the economy with a “wrecking ball.”

This is not a debating society; rather, it is a tragedy, according to deputy Labour leader Angela Rayner. Pensions at danger, increasing mortgage rates, and rising costs

“Tory MPs may either support Labour’s motion to summon Parliament back so that this kamikaze mini-budget can be overturned or choose to be complicit in this wrecking ball manufactured in Downing Street,” the motion reads.

However, after days of chaos in the financial markets and concerns of skyrocketing mortgage bills sparked by the Chancellor’s mini-budget last week, Liz Truss and Kwasi Kwarteng will be seen as the latest attempt to reassure markets and voters that the economic turmoil of recent days is under control.

According to Mr. Griffith, it is a very excellent idea for the Prime Minister and Chancellor to meet with the independent OBR because, like the independent Bank of England, they have a crucial role to play. Mr. Griffith made this statement to Sky News.

We all want the projections to be as accurate and timely as possible, but as a former finance director, I also understand the need for the correct degree of information.

Conservative lawmakers and top party officials, including former chancellor George Osborne, who spearheaded the establishment of the independent spending watchdog in 2010, applauded the decision.

It turns out the reputation of the organization we established 12 years ago to bring honesty to the public finances is more durable than that of its detractors, he added, calling the decision to conduct a meeting a “positive step.”

Despite growing unease on the Tory benches, Ms. Truss has promised to continue pushing the development agenda, particularly in light of the shocking YouGov poll released last night that showed Labour leading by 33 points.

It seems like a very good idea to me that the Prime Minister and Chancellor are meeting with the independent OBR because, like the independent Bank of England, they have a very vital role to play, City Minister Andrew Griffith said in a series of interviews this morning with Sky News.

We all want the projections to be as accurate and timely as possible, but as a former finance director, I also understand the need for the correct degree of information.

When questioned on claims that the OBR could have completed a forecast in time for the mini-budget, Mr. Griffith said, “That forecast wouldn’t have included the growth measures in that plan.” In the hours leading up to the Chancellor’s rising, they were being completed.