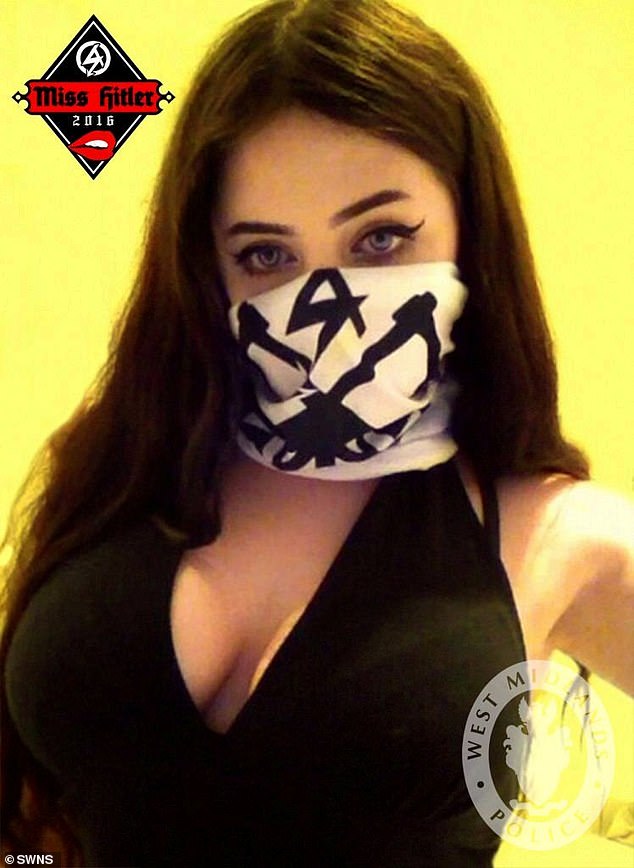 Next week, a parole hearing will be held for a prominent member of the same group of extreme right National Action followers as Miss Hitler Alice Cutter, who may be released with her.

Extremist Garry Jack, now 27 years old, said that he and another man were “dedicated and unapologetic” National Action members before the organization was outlawed in December 2016.

Even though he said he left the group before it was outlawed, he was found guilty in March 2020 and given a four-and-a-half year jail term.

During the trial at Birmingham Crown Court, it was shown that Birmingham resident Jack, then 24 years old, had been to practically every meeting of NA’s Midlands sub-group.

Additionally, he was previously convicted for placing racist stickers on the campus of Birmingham’s Aston University, some of which stated, “Britain is ours, the rest must leave,” before the group was expelled.

If the Parole Board votes to liberate him, Jack will also be released together with Cutter, 25, whose license to leave jail was reported by MailOnline this week.

The neo-Nazi beauty queen and several “diehard” coworkers, including her ex-partner Mark Jones, Jack, and Connor Scothern, had served just 26 months of a three-year term handed in June 2020.

The 22-year-old Scothern, who received 18 months, was denied parole during a hearing in October 2020, according to information provided to MailOnline. He has not yet been listed, but he will soon be qualified for another appeal.

Additionally, the Parole Board declined to support Scothern’s transfer to an open facility.

The parole review of Garry Jack has been listed for an oral hearing, which is slated for October 2022, according to a Parole Board spokeswoman.

“Decisions by the Parole Board are exclusively based on the danger that a prisoner could pose to the public upon release and whether that risk can be managed in the community.

“A panel will meticulously review a vast array of evidence, including specifics of the initial crime and any indications of behavior change, as well as investigate the damage done and the effect the incident has had on the victims.

Prior to an oral hearing, members reviewed and considered hundreds of pages of testimony and reports. The hearing will next include testimony from witnesses, such as probation officers, psychiatrists, psychologists, personnel overseeing the perpetrator in jail, as well as victim personal comments.

‘Then, during the hearing, which sometimes lasts a full day or more, the prisoner and witnesses are interrogated in-depth.

“Parole evaluations are conducted in-depth and with the utmost care. Our first goal is the protection of the general population.

The spokesman said, “We can report that Connor Scothern’s parole was denied by a panel of the Parole Board after a paper hearing in October 2020. Additionally, the panel declined to endorse a switch to an open jail.

Scothern, a Nottingham resident, was described at his trial as “one of the most active members of the gang” and “considered potential leadership material.”

Self-confessed Nazi Jack joined the gang six months before to the ban and was identified as one of the foot soldiers.

At his sentence, Jack, a resident of Birmingham, appeared via video connection. I have turned my back on the radical right,” he declared in a letter to judge Paul Farrer QC.

The Director of Public Prosecutions, Max Hill QC, described the group as “diehards in the manner that they think.”

“They derive their attitude from those extreme Nazi organisations and more recently neo-Nazi groups in Germany,” he added. “They hearken back to the days of not only anti-Semitism but the Holocaust, the Third Reich in Germany.”

The same ideology that we have seen represented in the sad incident in New Zealand, the murder of Jo Cox MP, and the assault at Finsbury Park mosque in 2017 is shared by them and poses a risk to the public.

This organization was stockpiling weapons and instructions for constructing bombs. To enlist people in their cause, they communicated via covert means. If left uncontrolled, they posed a serious danger to the general populace.

Mark Jones, Cutter’s ex-partner who loved the Nazis, was found guilty of being a terrorist and sentenced to five and a half years.

He has not yet been listed for a parole hearing, despite being eligible.

Three years after its founding in 2013, National Action was declared illegal under anti-terror laws because it had praised the death of Labour MP Jo Cox.