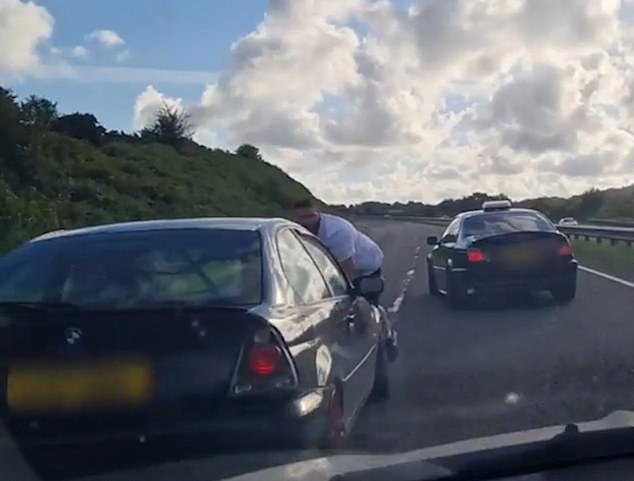 This is the exact moment a convoy of irate BMW drivers encircled, pursued, and stopped a motorist.

Ben Phillips and his wife were traveling from Ibiza when an unexpected automobile cut in front of them, leading Ben to blow his horn.

On the A30 in Weston-Super-Mare, the two had stopped at his mother’s home when the horrifying episode took place in broad daylight.

A DJ from Padstow named Mr. Phillips said: “I was driving along around 5 o’clock.” When a BMW recklessly cut in front of me, I was texting my wife and listening to the news on the radio.

As a result, I sounded my horn. This BMW played with me for the next several minutes, putting the brakes on.

Then, four other vehicles—who were traveling together—started to encircle my car, trapping me and bringing the A30 to a halt.

As a result, they crashed into my automobile. I stepped out and walked up to one of the vehicles, and it immediately took off.

“I then stepped in front of the other to prevent him from rushing off without providing his information,” the other said.

Then, after smashing into me with his vehicle, he fled without calling the police.

Six males reportedly jumped out of their cars at that point and began charging Mr. Phillips’ automobile with metal bars.

The BMW in front of him can be seen breaking on and off in the video before starting to move slowly along the dual carriageway.

Then, a second vehicle enters the scene, forcing Mr. Phillips’ automobile into a sharp turn before coming to a full halt.

The dashcam video then shows Mr. Phillips leaping from the driver’s seat and rushing to the left side of the road to stand in front of the car.

Mr. Phillips is then knocked down by the BMW as it begins to drive away, forcing him to slide onto the outside lane before carefully standing back up.

I then drove up in a layby because I was shook up, and they all came up behind me, he said.

Six men emerged and began to charge my car while brandishing metal bars, forcing me to sprint out of the layby and almost colliding with another vehicle.

Everything was abhorrent, terrible, and filthy. Things like that just don’t happen in Cornwall. I won’t be blasting my horn again, but I was startled and am hurting.

The BMW convoy is said to have been going to a drift competition in Perranporth.

When Mr. Phillips reported the incident to the police, he was told not to argue with people on the road.

He expressed dissatisfaction with the answer, saying the policeman had attempted to place the responsibility on him.

It is confirmed in an email exchange between an officer and Ben that three of the BMW drivers who were engaged in the incident were found and reported for driving carelessly and irresponsibly, as viewed by CornwallLive.

According to the email, “They have stated concerns about your behavior toward them in their accounts, which have been extremely similar, which has caused their reaction. This does not, however, excuse their actions or their driving style.

“I have no doubt that the beginning of this event included more than what was seen in your video.

I would want to warn you that it may be best to avoid conflicts or “road rage” in the future since it has obviously escalated to a severe scenario that might have caused serious harm or worse.

According to a spokeswoman for Devon and Cornwall Police, the incident is related to a Friday allegation of reckless and aggressive driving on the A30 close to Launceston.

The motorist who saw it, according to the spokesperson, “went to a nearby station after calling us to offer more information, including the registration information of two automobiles.”

Officers were able to track down two automobiles in Perranporth as a result, and the drivers were charged with a variety of offenses.

“Further follow-up issues related to this occurrence will be looked at in due time,” the statement reads.