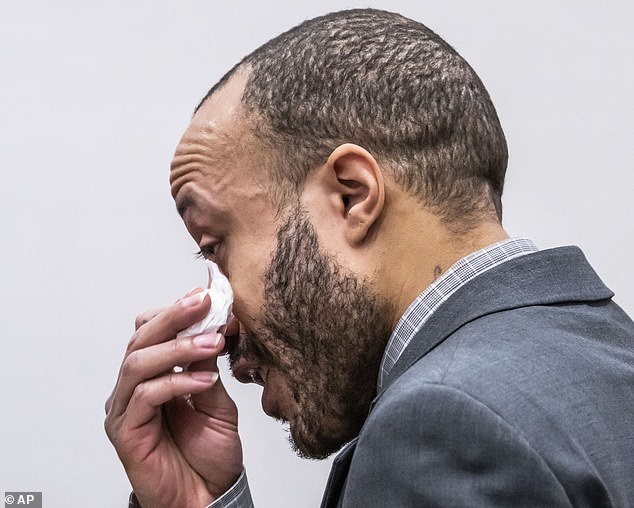 In today’s trial, which has been characterized by his disruptive outbursts and unpredictable conduct, accused Waukesha parade murderer Darrell Brooks sobbed as he gave his opening statement to the jury. This was only the latest example of his behavior.

The 40-year-old Brooks frequently mentioned the amount of “pain” the parade event had caused, including his own, while pleading with the jury to keep in mind that there are always two sides to every story.

He adamantly maintained that nothing that occurred during the assault on the parade in November was planned, and he emotionally lamented the derogatory terms he had been referred to in the media since his detention, such as “monster” and “devil.”

When Brooks did address the jury, he said he wanted them to see him for who he really was and that it was up to them to decide what was true and what wasn’t.

He is accused of driving an SUV into a Wisconsin Christmas parade last year, killing six people in all.

Judge Jennifer Dorow informed Brooks before he started that she had given him passages from a book on opening statements for court cases because she thought they “would be beneficial to offer to Mr. Brooks as he puts up his opening statement.”

His comments must be “based on the law and facts you feel is legitimately admissible,” she continued.

The first thing that Brooks said was that there are always “two sides to every tale.”

And for a good while—roughly a year—only one side of the story has been presented. And I’ve sat back and seen how this occurrence has sometimes been depicted in the various storylines that have been thrown out there. Finally, everyone will get an opportunity to learn the whole truth.

You won’t hear me attempt to refute the facts, Brooks said. This was sad,’ he said before adding that many families, including his own, are still getting over the catastrophe.

This occurrence wasn’t anticipated. He said, “It was not done on purpose.” There has been a great deal of grief in this situation, especially for the families, certainly.

Families were recovering, he said, “on all sides.”

About halfway through the speech, Brooks began to cry as he described how he had seen himself depicted in the media.

He replied, wiping away tears with a tissue, “Lot of supposition, lot of mockery, words like “devil.” such as “monster.” I’m sure you’ve seen me with this mask on a lot of the times I’ve appeared in front of you. I’ve had my reasons for doing that, but I believe the moment has come for you to see me for who I really am. no mask because to who I am. I believe now is the right time to do it.

He concluded by urging the jury to “stay as open as possible” and reminding them that the jury carried the weight of truth and lie.

I ask that you keep your eyes and ears wide open. I realize that you are the only one who can determine this case or this issue,” Brooks replied. ‘You have the key to the power. both of you. to decide what the truth is for yourself. I’m grateful.

Brooks went back to his seat and cried openly while resting his head on his desk.

The declaration was made when the prosecution rested its case after calling 57 witnesses. The process of summoning and cross-examining witnesses will now be started by Brooks, who has opted to represent himself.

He is accused of driving an SUV into a Wisconsin Christmas parade last year, killing six people in all.

Brooks has continuously interfered with the trial. He was ejected from the courtroom for frequent disruptions, engaged in verbal combat with the judge over legal concepts and practices he seemed to know nothing about, and at one point even took off his shirt and turned his back on the proceedings.

He argued with Judge Dorow yesterday when she asked him to cease interjecting so that the trial could continue.

I am a mature guy with grown children, don’t anyone TELL me what to do! he shouted. Nobody is going to speak to me like that, so please don’t.