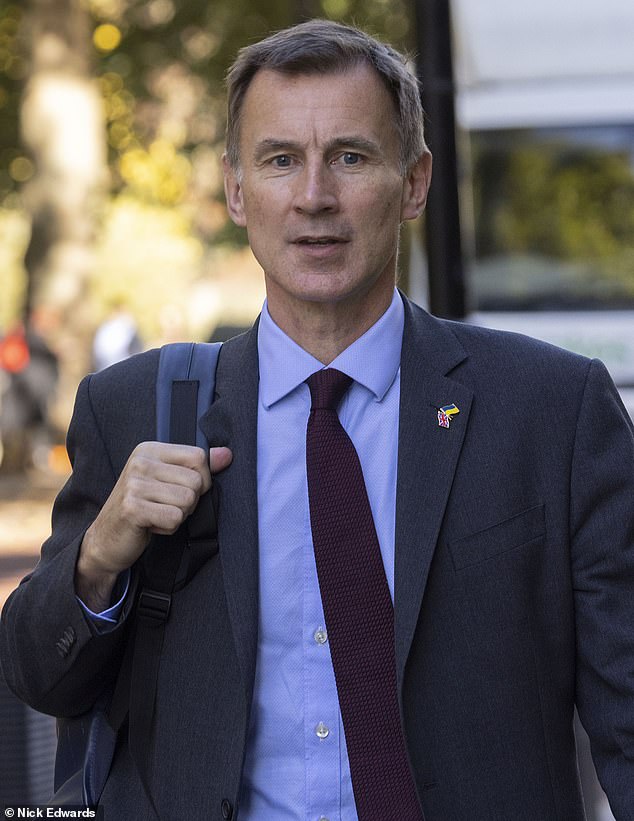 The Halloween Budget may no longer be implemented as intended due to the change in leadership.

Under pressure from the City, Liz Truss and Kwasi Kwarteng were required to present their full financial plans from late November to October 31 in order to demonstrate their ability to balance the books.

This week, the new chancellor, Jeremy Hunt, committed to maintain the deadline for his medium-term economic plan and immediately began negotiating budget cuts with Whitehall departments, warning that ‘gut-wrenching decisions’ would have to be made.

The declaration might be postponed or even canceled as a result of the spectacular downfall of Ms. Truss and the swift election of her replacement as Tory leader, triggering new turmoil on currency and bond markets.

If the new leader is not selected until the following Friday, they will have only a weekend to evaluate the ambitious economic plans before they are to be announced.

The winner may wish to alter the proportions of tax increases, spending cutbacks, and welfare system reforms required to close an estimated £40 billion budget gap.

A Whitehall insider stated that the Halloween date was “still the plan” but added, “Ultimately, it’s up to the future prime minister.”

Sir Graham Brady, chairman of the 1922 committee of the Conservative backbench, stated that despite the short timeline, the budget may still go as planned.

Yesterday, he stated, ‘I have confirmed with party chairman Jake Berry that it will be able to have a vote and finalize a leadership election by Friday, October 28. Therefore, we should have a new leader in place prior to the 31st of October financial report.

Miss Truss vowed over the summer campaign trail that if she won the leadership contest, she would hold an emergency budget to provide immediate aid to families suffering from the cost of living problem.

In her first move as prime minister, she declared a two-year freeze on residential energy costs, at an estimated cost of £150 billion. On September 23, however, when the Chancellor, Mr. Kwarteng, delivered what was thought to be a “mini-Budget,” it exceeded all expectations.

His growth strategy comprised reducing the basic rate of income tax and abandoning a corporation tax increase, as well as betting that £45 billion in spending cutbacks financed by borrowing would provide rocket fuel to the economy.

However, he also stated that he would eliminate the 45p top rate of income tax and abolish the bar on bankers’ bonuses, causing uproar from Conservatives and opposition MPs who argued that it was unfair for the wealthy to profit when so many were struggling.

And, fatally, the tax cuts were presented without the Office for Budget Responsibility’s customary accompanying prediction, leaving investors unaware of how they would be paid for.

Mr. Kwarteng initially stated that he would unveil his medium-term budgetary strategy on November 23, two months after the announcement of tax reduction.

However, he was compelled to move it up to Halloween due to instability on the bond markets, which wiped billions off the value of pension funds, pushed up mortgage rates for homeowners, and prompted a dramatic intervention by the Bank of England.

Mr. Kwarteng also had to reverse his position on the 45p tax rate decrease, but when this failed to soothe financial markets, he was fired a week ago, with his replacement, Mr. Hunt, canceling nearly all of his other proposals without ceremony.

The Treasury declined to say last night on whether or not the Halloween statement would proceed. According to an insider, it will be up to the new prime minister.

Internally, however, we continue to adhere closely to what has been announced unless instructed otherwise.’

John Hawksworth, a former chief economist at PwC, pointed out that if the Halloween budget were to be delayed, it would be too late for the Bank of England’s November 3 decision on the next important interest rate decision.

In addition, any modifications made by the next prime minister after the 31st would be too late for the OBR to evaluate, which would worry investors and increase the pressure to continue with Mr. Hunt’s current plans.

Mr. Hawksworth tweeted, “If the new prime minister wishes to make any changes after October 28, it will be too late for an OBR projection that is crucial for credibility.”

Alastair Carmichael, a Lib Dem member of parliament, stated, “The Budget should not be delayed for even a second.” The Conservatives have brought the economy to its knees, so they cannot keep the public waiting.

‘Mortgages for tens of thousands of individuals are increasing every single day, and the pound is teetering on the brink of collapse.’